Juxtaposition In Your Story 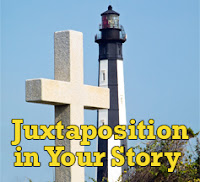 Last month my post chatted about the appeal of the flawed hero(ine)s. The undercurrent of how effective these characters are is in their creator’s use of juxtapositions.

I sprinkle that sh*t on everything.

Contrast in story is not an unfamiliar concept. The idea of running two parallel, yet opposite plots alongside each other is the basis of so many classics—A Tale of Two Cities and The Great Gatsby being two stories within which the reader’s mind is jarred with a sense of divergence.

Juxtaposition can be even more powerful when two disparate concepts coexist within the same element though, and as a writing technique can amplify momentum, theme, and depth of your story.

Juxtaposition in Setting: Messing with what a setting represents versus what truly goes down there. Hotels, for example are, by design, intended to be shelters (there was no room at the (comfortable) inn, remember?) Shelter is not supposed to equate with sinister, yet it worked awful well in Stephen King’s The Shining, and was equally enthralling in American Horror Story Hotel. (Which incidentally, was inspired by L.A.’s infamous Cecil Hotel—which also served as the inspiration for my novella No Vacancy).

A school is the place where some of the most vulnerable among us, children, belong—which is what makes school shootings particularly heinous.

Adultery shouldn’t happen at weddings. Business deals should not be inked at funerals, A morgue shouldn’t be a place of comfort. Yet when those incidents do occur, or safe places are scary, we are hooked. Why? Because our brain is busy challenging its own set of mores, beliefs, and preconceived expectations. Tension and conflict are generated.

Juxtaposition in Character: True Detective did this very well. Rust and Marty were cops charged to ‘protect and serve’, which they did—yet interpersonally the exact opposite was going on. Marty was a sex addict and serial adulterer. He did not protect and serve his marriage, family, or any of the many partners he shucked his shorts for. Then there was Rust who, while a sharp and even sensitive detective, assaulted his own body again and again with copious amount of booze and obsessive thoughts. These characters were walking contradictions. Flawed? Yes. Contradictory? Completely. Conflicted? Definitively—and that’s why we couldn’t stop watching them.

Juxtaposition of Philosophy: The aforementioned idea of law enforcement protecting and serving while simultaneously behaving lawlessly. Or perhaps you watch the series House where the healer is heartless. The old movie Stand By Me (aka Stephen King’s The Body) weaves death with innocence. Ron Rash, in his literature, consistently braids the beauty of his settings with the brutality of the people who inhabit them.

When a value or more simultaneously pushes forward its equal and opposing agenda…now that’s interesting.

Juxtaposition of Emotion: Ambivalence and incongruence create such a deep reading experience for your audience. Lionel Shriver did this incredibly well when, in We Need To Talk About Kevin, she painted a mother who sincerely and unequivocally did not love her own child—yet we felt sympathetic toward her anyway.

Do you use juxtaposition in your writing and / or have you noticed brilliant books or films that did? Share and share alike!