How to Write With a Teen Voice 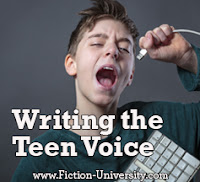 Q: I’ve been submitting my 12+ novel to agents since the end of 2015. I’ve been rejected each time but have had quite a lot of good, encouraging feedback. One of the comments that keeps cropping up is that I should strengthen my main character’s voice. He’s a 15 year old boy in a difficult position, grumpy but basically a good guy. Any suggestions on how I could approach this?

A: Capturing the teen voice is one of the harder things to do as a writer. It’s also a tough thing to talk about without seeing any of the actual work, but let’s look at what makes a teen voice (if the submitter of this question wants to post a snippet in the comments as an example, please feel free).

A quick note here…this all applies to fictional teens in teen literature. There are plenty of real teens who are well-adjusted, generous, and thoughtful people—but those make for really boring protagonist (grin).


Fictional teens see everything around them as it pertains to them and their current problem. They’re selfish, even if they’re good people; they just think “me” first. Even when they think of others, there’s a decent chance it’s to benefit them in some way. It’s not about malice, they just haven’t yet learned the world does not revolve around them.

Using the question as an example, a grumpy 15-year-old-boy is probably going to focus on whatever is making him grumpy, and likely why it’s everyone else’s fault but his. Even if he does take responsibility for it, it will probably be in the best possible light and everyone else is being unfair by not seeing his side. Something as basic as walking down the street still puts him at the center—when he describes the street, it’ll be the the details that matter and affect his life. Odds are, if it’s happening or matters to someone else, he won’t even notice it.

(Here's more on Writing Realistic Teenagers in YA)

2. It’s personal, and everything is “life or death.”


This is one of my favorite things about writing for teens—the stakes are so high no matter what’s going on because it’s all so personal. The world is out to get you. The traffic jam that makes the bus late for school was personally meant to keep you from running into your crush after you spent two hours getting ready that morning. Running out of deodorant and having to use your sister’s was a plot of the universe to make you smell like lilacs when you bumped into that cute girl who laughed at you. Even in a fantasy or non-modern setting events carry more weight, and the teen is often literally the only thing standing between salvation and the end of the world.

However…this doesn’t mean the teen is all doom and gloom and walks around like the world is coming to an end. Things are important, but there’s still light and fun and jokes in their lives.

Let your teen make mountains out of molehills and worry about how they affect him. A little melodrama is your friend here, as teens often take it over the top (use sparingly). Let him look at whatever his problem is as the worst thing to have even happened to him in his life, because odds are, it is. But also let him have lighter moments when it’s the best thing that ever happened to him as well. It’s about the emotional extremes and the shifts between them.

(Here’s more on The One-Two Punch: Creating Conflict and Raising the Stakes)

3. Everyone has an opinion—especially the protagonist.


Internalization is critical to a teen voice, because they’ll have opinions on everything. If your protagonist isn’t commenting on something they’re describing, you’re missing an opportunity to show who they are and what they think. Teens think they know everything (we all did, remember being a kid?), and they’ll share that knowledge in their internalization. More times than not, they think they’re right and everyone else is wrong.

Be wary about this however, as too much opinion and internalization can bog down the story and make it feel melodramatic. Like all first drafts, write whatever comes to you, but make sure you edit for the right balance of judgment to narrative (this varies by book, so use your instincts).

Show your story world through your teen’s eyes, not yours, and let him judge that world how he sees it. Show what he thinks, how he feels about it, how he judges everything around him. Use terms and language that a teen would use, but don’t rely on slang, as that gets dated fast and frequently comes across feeling forced and “old.” Remember—the opinions are based on it being about the teen, and being personal.

(Here's more on What You Need to Know About Internalization)

4. Everyone is terrified about something.


Teen years are scary, and all those fears influence how a teen character sees the world. They have insecurities, horrible memories of being teased, being left out, being embarrassed. Fear of what other will say or think rules their actions. A teen who isn’t scared or worried about their peers is going to feel wrong to readers.

This one is fairly easy to apply, since your protagonist will have fears and issues as part of his character arc. But don’t forget to add the common things teens fear—embarrassment, fitting in, sounding dumb, school, peers, the opposite sex, the future, etc. He’s probably not going to act until he’s considered how it will affect these fears. Except when he acts without thinking and blunders right into one of these fears.

(Here's more on 3 Things to Consider When Writing Teen Romance)


This applies to the physical as well as the emotional. Teens want to wear the right clothes, accessories, go to the right places and do the right things. Looking dumb or uncool is nightmare-inducing. Teens want to be liked and accepted, so going against the norm and looking bad is a terrifying prospect. Yet they also want to be unique and defy the herd, which creates all kinds of wonderful internal conflict and contradictions.

Teens get moody. They get grumpy like your protagonist. Peers will accept this and even admire him for it in the right circumstances, though they’ll also call him “freak” in others. It all depends on where the grumpy is coming from and how he chooses to express it. He might try to look “appropriate” to others, yet show his grumpiness in how he thinks or body language. Consider how whatever is making him grumpy would be seen by his peers and how he’d feel about that. This will show in his voice.

6. Everyone wants to appear “better” than they are.


Insecurities abound, and it’s not uncommon to embellish a little for the sake of appearances. No one wants to admit they’re just as scared and confused as everyone else.

Your teen might want to act like his grumpiness isn’t a big deal, or he’s fully justified in it. Maybe it’s the result of some huge cosmic conspiracy to make his life miserable. He might be using this to cover up his insecurities or fears. It might be easier to push people away than to deal with whatever is bothering him.

7. No one really knows what they’re doing.


Teens don’t yet have the world experience to know what the best course of action will be, or even that what they plan do to will result in monumental failure (this is another of my favorite YA aspects). The upside, is that they also aren’t constrained by a “that’s not the way you do it” mentality, and can come up with some really creative solutions to problems. Even planners are winging it, because they just don’t know enough to know what they don’t know.

Your teen will likely have self doubts about a lot of what he does and feels, but he’ll also have moments where he’s sure he’s doing the right thing, even when it’s so clear to readers he’s not. His confidence level will be reflected in his voice and how he views situations and makes decisions. But it won’t always be real—if he’s scared, he might project confidence to avoid being teased or ridiculed, so his inner voice will differ from his outer dialogue.


They sound too adult: Teens see the world as a teen, not an adult.

They’re too self aware: Teens don’t typical understand their actions and motivations.

They’re too grammatically correct: It’s the difference between writing a text, an email, and a letter. If the story is too formal, it’ll feel too adult.

They’re too dumb: Today’s teens are smart, so if they sound like Leave it to Beaver, readers won't buy them.

They’re more external than internal: Teens focus in first and out second. It’s the emotional aspect that usually resonates with readers.

They’re too one-note: Teens are layered and complex like any adult character, so avoid the stereotypes and the cliches.

Writing a strong teen voice starts with writing a strong teen character, so know who your protagonist is and how he sees the world. Let his view of it color how he tells his story and defines his world. It’s what he feels and what he thinks, not about what the author knows.

What advice would you give this writer?