How to Find Your Character's Voice 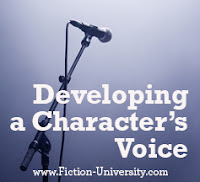 Q: I struggle with internalization in first person POV. I've read your internalization 101 post. Maybe it's that I don't know my character well enough to get a feel for how she would describe what she sees, feels, hears etc. I don't feel like I'm quite there with her voice and I think big part of it comes down to her thoughts (or lack thereof).

A: I’m going to answer this question in two parts (my answer on voice got quite long). Today I'll talk about developing a character's voice, and next week, I’ll look specifically at writing first person internalization and how it differs from third person.

Since voice is heard so strongly in internalization, it’s possible a lack of voice is indeed what’s holding you back. Let’s focus on some ways to find your character’s voice, and how to use that voice to write your internalization. Start with a little character development tailored specifically for voice:


If you haven’t done a lot of character development, you might spend some time thinking about who this character is and what she’s like. You don’t need to know extensive backstory or a lot of personal details, but you should know the type of person this character is. Someone who’s shy and snarky will have a different voice from someone who’s brave and judgmental. Try choosing three words to describe this character’s personality. Try to pick a word that describes:
(Here’s more on creating character voices)

2. How do you want the character to sound?


This will go hand in hand with the overall tone of the book. If the novel is funny, odds are the protagonist is going to be funny as well. Her internal voice will reflect the type of humor she enjoys and employs. If the novel’s tone is dark and brooding, the narrator will probably see the darker side of things and contemplate her surroundings and situations in a more serious manner. Consider:
(Here’s more on tone and mood)

3. Is her inner voice different from her spoken voice?


Not every character will hide who they really are, but if she’s the type of person who doesn’t want others to see the real her, her interior voice will reflect the person she’s hiding.

4. What does she think about?


Look to your goals, internal conflict, and character arc for options here. Her motivations will likely be on her mind, as well as the things she worries about. For example, if she’s caught up in a fight, her goal for how she wants that fight to end could be on her mind. If she’s worried, what might go wrong would probably be flashing through her thoughts. Consider:

These are just some of the possibilities, but hopefully they’re enough to give you an idea of what to consider. And remember—not all of these need to be conscious thoughts. Someone just getting over a bad breakup might be wary of anyone who reminds her of her ex, even if she doesn’t realize it. But her thoughts might hint at that wariness or unconscious hostility.

5. How does her thought process work?


Some people make snap decisions, others need to examine every possible angle before making a choice. Think about how much time and consideration your narrator needs to make a decision. This will reflect her personality in some way, as someone who’s impulsive likely makes snap decisions, and someone who is thoughtful and deliberate probably takes her time to examine every option.

Struggling with internalization could just be a red flag that you haven’t figured out enough about the character to write her yet. Try developing the character and her personality (not physical details) until you feel you know her well enough to capture her voice. Her internalization ought to start flowing naturally then.

Do you have any tips for this writer? How do you develop your first-person narrator’s voice?

Find out more about characters, voice, and point of view in my book, Fixing Your Character & Point-of-View Problems.