Want Better Characters? Get Rid of the Dialogue 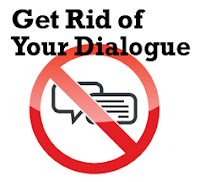 In novels, we often rely on what a character says to show who they are. Their actions also play a role, but the focus is usually on the big stuff—the choices made, the sweeping gestures, the plot-driving tasks. Yet, it’s often the little things people do that make them memorable.

I once read a book (I don’t remember which one or who wrote it it was so long ago), but there was a scene where something had happened and the police were talking to witnesses. The protagonist did not want to be remembered. So a character with her scrunched up the side of his face so it twitched, limped over to police, and answered questions with a strong southern accent. She was appalled, and thought he’d just given them away. He said, “Nope, all they’ll remember is the twitch, the limp, and the accent.” Funny thing, after probably twenty years, that’s all I remember about that book as well.

Take a look at your current WIP. What’s memorable about your characters?

Do they have unique mannerisms that make them stand out, or are they general people with a few special physical traits—such as icy blue eyes or curly raven hair?

For fun, pick one of your scenes and cut out all the dialogue.

What are your characters doing when they aren’t speaking? Does their personality shine through? Can you tell who is who without their names? Do they feel like individuals or cardboard cutouts spouting lines—even if those voices are all distinct? Character voice is only half of what makes them them.

Here’s a test: Can you name five unique things about your character that someone could learn by observing them? And no, hair color, eye color, height, weight, and age are not acceptable answers here. Dig deeper. For example, one of my quirks is to fold the wrappers from straws like an accordion. My husband likes to spin his wedding ring on the table. My sister startles easily, and my niece talks a mile a minute (so do I, actually). These are minor details, but they’re the types of traits you can add to a character to bring them to life.

If your characters feel a little flat, try adding some non-verbal mannerisms to them. Things to consider:

1. What do they do with their hands?


It’s rare to see someone standing with their hands hanging still at their sides. It’s awkward and kinda weird. Personality and emotion plays a role, so think about the character’s basic personality and how they feel in that scene. Someone who’s confident and trying to draw attention might stand with arms akimbo, while someone who’s lying or hiding something might also hide their hands. Shy types might fold their arms to guard themselves, while nervous folks might fidget and touch everything around them.

2. How do they carry themselves or stand?


Some people claim the space they’re occupying no matter where they are, others disappear into the background. Think about how they grew up the challenges they might have faced. Would any of that affect how they carry themselves?

3. What do they think about when they’re not speaking?


For point-of-view-characters, internal thoughts can show a lot of personalty that might not appear in the dialogue. Their thoughts might show who they truly are, even if they’re too scared to let others see it. One of the more memorable aspects of my protagonist in my YA novel The Shifter, is that Nya quotes her grannyma whenever she needs wisdom or encouragement.

4. What do they do when they speak?


People unsure of themselves might clear their throat before asking a question, or raise a hand. Others might barrel over or interrupt. Some people talk with their hands and gesticulate wildly, and some wander around the room.


Barney Stintson always wears a suit for a reason. Clothing can show personality in a more subtle (or not so subtle) way. Think about what their choice of attire says about them—and what they’re trying to say by wearing it.

6. Where do they choose to place themselves in a room?


My father never sat with his back to a door. I can’t sit facing a bright window. Think about what might bother a character and where they might choose to put themselves. Do they stay near exits? Position themselves front and center? Are there physical reasons for this choice? For example, my window issue is due to a migraine trigger.

When creating (or revising) your characters, don’t forget to add a character’s mannerisms. Let your imagination run wild and find fun traits that show aspects of who that character is and where they grew up. Common local customs might be so ingrained they do them without thinking, or they might work hard to avoid something that would give their background away. It might even be a goofy habit that just makes them happy—like folding paper straws.

What mannerisms do your characters have?