The Easiest Way to Create Conflict 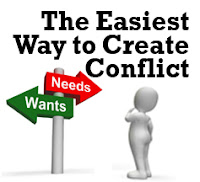 Writer Unboxed had a great article over the weekend about a fun tool to develop stories. John Vorhaus showed us how asking a few simple questions gets to the heart of your idea, and I wanted to expand on one aspect of that regarding conflict.

In many stories that “aren’t working,” this is the most likely reason why—no real conflict. This is especially true for stories that feel as though they ought to work, but are still getting meh feedback from critique partners.

When the conflict is focused on getting the external goal only, no matter what is thrown in the protagonist’s path is just a delay tactic, no matter how amazing the path to get there is. We might enjoy seeing those obstacles overcome, but without the protagonist facing tough choices, there’s no actual personal conflict.

(Here’s more on creating tough choices for your protagonist)

While this can work in a movie (Raiders of the Lost Ark is probably the best-known example here), it tends to feel shallow in a novel. Action is quite compelling visually, but it has less impact when described. The emotional side is typically more compelling in written form (maybe that’s why love letters are so effective).

Let’s look at an example:

In my novel The Shifter, my protagonist Nya wants to find (and later save) her sister, Tali. That’s her goal and what she wants. But what she needs, is freedom—literal “not be oppressed by the occupying army” type, as well as the “free to be who I really am” type. In most aspects of her life she’s trapped, and that’s the theme of the novel.

So naturally, finding Tali means she’ll have to do the one thing that is guaranteed to make every bad guy in the land want to kidnap her and trap her forever.

What she wants (to save her sister) conflicts with what she needs (to be free). Having one means she loses the other, and she’s not willing to give up on her sister. But to win, she has to embrace who she is and use it to save Tali (and herself). Until she becomes who she truly is, she’ll never be free.

Of course, she doesn’t realize this at the start of the series, as needs can be unconscious goals. She knows she wants to be free of what’s trapping her, but she has no idea what will actually make her free. She has to undergo the trials of the plot to figure that out.

Most of the smaller scene-driving problems in the novel are due to this core conflict of want versus need. She gets caught stealing and wants to escape, and she uses her special pain-shifting ability to do it—which draws attention to herself and risks her freedom. She gets plenty of opportunities to be the person she wants to be, but they all come with a price she doesn’t want to pay. Sometimes she refuses, sometimes she compromises, and sometimes she pays it, knowing what it will mean later, but also knowing that not paying it is the worse option.

This, “you can have what you want, but it’ll cost you” concept creates personal conflict that makes readers care about the characters and the outcomes of their actions and choices. It creates the story that the plot is trying to tell. Yes, Nya can save her sister, but she’ll have to become the most-wanted girl in two nations to do it. But Nya won’t leave family behind so she’ll make the sacrifices, even though she fights how much is taken from her every step of the way. Stripping her of her armor and protection (her anonymity) is what eventually reveals the real her, and when that’s all she has left, she has no choice but to embrace it.

Which is what readers have been waiting for all along. (Because Nya can kick some serious butt when she cuts loose.)

(Here's more on how to create your inner conflict)

Look at your current project and ask:

What does your protagonist want? This is the problem they need to solve in the novel. It’s what the book’s plot is about. Why do they think this will make them happy? Why won’t it?

What does your protagonist need? This is the character arc. This is what will make them happy and allow them to be the person they really want to be. Is it an unconscious or conscious need?

How do those two things conflict with each other? This is where the actual troubles lies. The other problems in the book are just examples that illustrate this core conflict. They can’t have both, and having one creates a problem with the other.

If you don’t see a clear or strong conflict (and you might not, since this is a common issue), brainstorm ways you might add that conflict. Or, look deeper at what your story is really about. It’s possible you have an inkling of what the protagonist’s need is, but you never articulated it. You have a gut feeling you can’t quite put it into words, but it’s guided you so far.

Once you find (or clarify) it, look at your story again. Odds are you’ll see scenes that will be much stronger if you add an aspect of that new-found conflict to them. On plot-heavy novels, you might even see the exact character arc you need to make that story sing.

Using this want versus need model, what’s your conflict?


Find out more about conflict and tension in my book, Understanding Conflict (And What It Really Means).