Beautiful Disasters—Reasons We Love The Anti-Hero 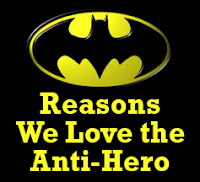 In the spirit of how the Christmas season offers redemption for all who’ve been broken—and as I tabulate my favorite reads of 2016—I thought I’d start a thread of discussion on the anti-hero (or dark protagonist, if you prefer) today.

Some of the best stories I read this year were built around characters who weren’t anyone you’d invite over for Sunday dinner, and yet I loved the books because of their presence, not in spite of it. Myriad writing articles advise us to create characters like this—villains who are multi-faceted, deeply layered—yet as I reflect upon the ones I ‘met’ this year, I’m more curious as to why I liked them, and how to perhaps embody these qualities into my own dark-natured characters.

So let’s take a look at a few of them.


1. ‘The Narrator’, The Enchanted, by Rene Denfeld.


He’s on death row, and even the compassionate Warden and benevolent condemned inmate’s advocate believe he should die. His crimes are so heinous they’re only ever hinted at, never described, and he himself says he is “An abortion that never happened.” Yet as his narrative carries us through the story, we love him—and weep when his fate is meted out in the end. But why?

Because despite what he’s done, and regardless of his history, he is shockingly devoid of self-pity (even though he deserves it) and, more powerful, he longs for love—not for himself, mind you, but for all the others he, in his solitary cell and in his mute life, sees around him. The Narrator, despite the fact that he’s an admitted monster, knows that the world and everyone in it is much more beautiful, and magical, than he has ever been or can be. And he wishes it love. Complex, gorgeous, unforgettable, and tragic—it is his loving insight about the world that makes him a character we adore.

2. ‘Liza’, A Grown-Up Kind Of Pretty, by Joshilyn Jackson.


Liza is a meth addict with the body of a goddess and the morals of an alley cat. She’ll sleep with any man whose zipper takes her fancy (and the more married the man the better), and is remorseless and selfish as she indulges all her dark appetites. Liza isn’t someone most of us would get behind…yet we do. Why? Because Liza, for all her faults and callous choices, will also employ her manipulative skills to get the people we do love in the story what they want. Liza’s loyalty to those she loves is why we love her—despite (and sometimes because of) the sincerely awful things she does.


An autobiography?! Yep. This character is from a memoir and so isn’t, strictly speaking, a ‘character’, yet…

James walks us through his journey of trying to unravel the mystery within the disappearance of Maura Murray and we see him get a chicka-chicka-wah-wah lap dance from a stripper (he’s married, BTW), brow beat family members of the missing woman, show up unannounced and at the most inopportune times to interrogate people (in their own homes), and even get a personality inventory from a psychologist that reveals he shares the same psychopathology as Ted Bundy. Yet…James rocks. Why? Because not only is this guy brazen and tenacious (as most psychopaths are) he is also unflappably honest (as most psychopaths are not). James puts himself out there and tells his story warts and all—a bravery that’s a little breathtaking and a whole lot ballsy. Love this guy. I’ll read everything he has to write and wait for more.

Honesty, empathy, loyalty…even the worst among us can embolden these traits, and my hat goes off to the authors (such as the ones above) who are able to weave these elements into their dark protagonists so masterfully.

Now it’s *your* turn, though—which characters have you read, or perhaps created, who you loved despite their wickedness? Share ‘em up—and may the Spirit of the Season redeem all of the shadows that exist in us all.