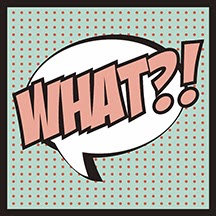 The Q&A continues today with...

A: Although this is specific to third person questions, I think it also applies to first person to a lesser degree. (Full disclosure: I write mostly first person and I love internalized questions) They're great placeholder sentences to show where you might want to create some mystery, so feel free to use them as much as you want in a first draft. But for later drafts, consider how many are helping your novel vs hurting it, and revise accordingly.

The problem with internalized questions is that they can feel like you're whacking readers in the head with what they ought to be thinking or wondering about, instead of dropping clues that make them wonder about it. For example:


She crumpled the note in her hands. "Sorry?" she whispered. He walked out on her and all he could write was sorry? Was it another woman? Did he meet some hussy in the law school she paid for? Slaved for? Had he been using her all these years? That jerk. She'd never been anything but a cash cow to him. She flung the note across the room. How could he do this to her?

While these are all questions someone in this situation would reasonably think, there leaves little here for readers to wonder about on their own. It also feels like this is indeed the case and there's no other possible reason for the situation. The questions lead too much and this ultimately feel too on the nose. Even worse, it gives the story nowhere to go, as the character isn't doing anything to move the story forward, she's just spouting questions. But let's "answer" these questions instead and show what the character would think if she'd already considered these questions and decided what they all mean.


She crumpled the note in her hands. "Sorry?" she whispered. He walked out on her and all he could write was sorry? That jerk. She'd never been anything but a cash cow to him--hell, she'd even financed his quest for a "more suitable wife" like an idiot. She flung the note across the room. This wasn't over. Oh no.

Reasons to Use Internal Questions

Sometimes we do ask internal questions, especially if we're angry or upset. "How could he do this to me?" is a good (if clichéd) example. "Is he serious?" is another. Thoughts that could be spoken aloud often work just fine as internal questions. (Though it's fun to see how the scene would go if the character actually did say them out loud)

An internal question can work as a scene goal statement: "where was the murder weapon?" This shows the character is probably going to be looking for this item. "What if she was wasn't at the bar?" suggests figuring this out is important. It can also tell readers what the overall story question is, and what the book is trying to resolve: "So what really happened to Mario?"

When it would create more mystery, tension, or a dramatic pause

Questions can work as those "dum-dum-DUM!" cliffhanger moments to raise tension or hook readers. It might be a revelation: "Did that mean John was alive?" Or an internal conflict the character will be struggling with: "Could she trust him?"

Sometimes a character feels one way internally, but is forced (or wants) to show a different attitude or emotion externally. An internal question can be a great way to show this dichotomy. What kind of moron was he? She nodded. "You make a good point."

When a character is debating with themselves

Although you have to be careful here (it's easy to go to far), questions can be a handy way to show a character having an internal debate. This can be especially helpful if you need to show how a character had made a connection or a leap in logic that might feel contrived without the explanation.

Reasons Not to Use Internal Questions

If the question is there to tell readers what to think, and there's no room for any other option, you might want to cut it. If readers can't get to that question on their own by what they see in the text, and there's no reason (or a weak reason) for the character to ask it, there's a good chance it's going to feel awkward.

When it feels repetitious

Like my first example, a lot of questions in a row can feel like you're badgering the reader, especially if they all basically say the same thing. Try showing internal thoughts or actions that suggest those questions (or answers to those questions) instead.

When it doesn't convey any real information to move the story

Empty internal questions can feel like empty dialog. It's not necessary to understand anything in the scene, but it feels like it ought to be said. Try cutting it and seeing which version reads better.

If the internal question is followed up by thoughts, action, or dialog that implies the same question, there's no need to shine a light on it. For example, if the character is staring at a crime scene and describing it in detail, starting or ending with "what happened here?" isn't really necessary.

(Here's more on choosing which thoughts to italicize)

If you're not sure if the question should stay or go, ask yourself:
If you answer yes to any of these, odds are it's a good question to cut.

Internal questions are a great tool to show what a character is struggling with and what they're trying to do, but it can be overused if we aren't careful. Trust your instincts--if if feels awkward or melodramatic, odds are it is and cutting it would strengthen the scene (reading it out loud is a good test for melodrama).

How do you feel about internal questions? Love them? Hate them? Never gave them a second thought?