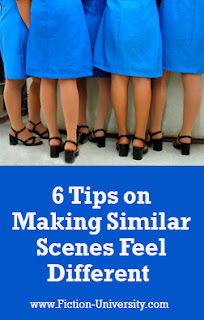 Novels often use similar scenes to tell a story, but writers don't have to make them all read the same. Here's a look back on ways to keep scenes from feeling repetitive.

Novels—especially genre novels—often have similar scenes making up the plot, because the protagonist has a series of tasks to complete in pursuit of the goal. In a pulse-racing thriller, the protagonist will find himself involved in action sequences or chase scenes. Romance heroes and heroines will navigate their way through a lot of relationship scenes. Sleuths in mysteries will spend a large chunk of the story searching for clues and speaking with suspects. After a while, these similar scenes can feel repetitive and even predictable.

For example, if there are a lot of chase scenes where the protagonist (or antagonist) is never caught, readers might just assume she won't be and stop worrying about it. Lovers who almost kiss over and over? They won't be the only ones frustrated by the repeated near-misses. But these core scenes are central to these novels, and are even expected by their readers.

It's the old, "give me the same thing but make it fresh" dilemma.

1. Change the focus of the scene


Sure, she's the protagonist, but if everything always happens to her and is about her, then you miss out on opportunities to enjoy other characters or aspects of the novel. Have a lot of scenes with a protagonist on the run? Why not make the protagonist the pursuer in one of them? Or let her hide instead of run? You might even try inventive ways to show a chase, such as through an unusual setting or in a unique way.

Try looking at your similar scenes and determining what the main focus is for each one. How might you shift that focus to achieve the same story goal, but make the scene feel different? Can any of the scenes end with the current goal being the result of something else happening? Can a larger issue drag the characters away from what they were focused on? Can a smaller annoyance become the main problem and the main problem shift to a smaller annoyance?


2. Change the goal for the scene


Having goals is vital to a novel, but you do need to mix it up a bit. Not every goal in every scene should be the same. If every scene is about "let's save the girl!" in some fashion, the novel can feel stagnant. They're always trying to save the girl (or whatever the issue is for your story).

For a few scenes, why not pursue a different goal? Maybe the protagonist needs to do something that shows why saving the girl matters, or is the result of a previous plan gone wrong. Maybe the goal is indirectly tied to saving the girl, but connects more to a subplot. If the previous goals have been about "getting something" then maybe throw in a few that deal with losing it, or keeping it.

You might also look for smaller problem that prevent the protagonist from pursuing that recurring goal. In order to move forward, another issue must be dealt with first.

3. Change the stakes of the scene


Stakes that never escalate can be a serious tension drainer for a story, especially if every stake is death or capture. Try looking for specific issues that can have consequences, smaller stakes that still carry dire consequences. Think of them as lynchpins—they might seem small at first glance, but pull one and the entire plan comes crashing down.

Also look for ways to narrow the stakes of an immediate problem or action. If "losing the guy" is the risk, maybe have the stakes attached to an act that would lead to losing that guy. On its own it's not a horrible consequence, but under the right conditions—catastrophic.

(Here's more on Raise Your Novel's Stakes by Narrowing the Focus)


4. Change the location of the scene


Have too many scenes around a table? In a car? In someone's room? Kick them out! A setting change can add all different (and unexpected) layers to a scene by working thematically with it, or contrasting it.

Need two lovers to have yet another near-miss kiss? Maybe they wind up at a frat party and get pulled into a raunchy game of spin the bottle. This could be an even more unexpected location if neither character is actually in college. Think outside the box and look at places that—at first glance—look like the worst places for that type of scene to happen.

5. Change the emotion in the scene


Horror might be about the fear, but if your characters are always scared, the fear becomes the norm and readers won't feel that fear. It's the ups and down and shifting emotions that create tension and contrast in a scene. Are your lovers constantly pining away for each other? Give them a day or two to be happy.

Take a look at the scenes you feel are the most redundant. What would happen if you used the opposite emotion instead? If the protagonist is happy, make her miserable. Terrified? Make her amused or angry. What unexpected emotions might you play with and how might that change the scene?

(Here's more Do You Feel It? Writing With Emotional Layers)

6. Change the mood of the scene


Don't forget the other characters or the mood around the protagonist. A sober funeral could be the funniest place in town under the right circumstances, and a lovely moonlit night could feel like the end of the world if things are amiss. A change in emotion could work on a larger scale as well as for an individual character.

Think about how movies use mood. Someone breaking into a house in a thriller feels dark and foreboding, but a cat burglar sneaking in to steal a priceless jewel can be sexy and playful. A heist is almost always fun if the thieves are the good guys, yet sinister if they're the bad guys.

Many stories need similar actions, and thus similar scenes, but the scenes don't all have to feel the same. Mix it up and even the same scene written three ways can offer something new each time.

Do you have scenes that feel too similar? Have similar scenes ever pulled you out of a story?

Find out more about setting and description in my book, Fixing Your Setting & Description Problems.