Writing to Heal: The Benefits of a Cathartic Novel 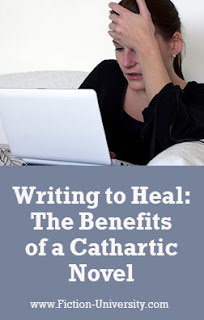 JH: Writing has many benefits, and the chance to sort through difficult emotions is one of them. Kassandra Lambs visits the lecture hall today to share thoughts on how writing a cathartic novel can help a writer heal.

Kassandra Lamb is a retired psychotherapist/college professor turned mystery writer. She spends most of her time with her characters in an alternate universe, the magic portal to which (i.e., her computer) is located in Florida, where her husband and dog catch occasional glimpses of her.

She is the author of the Kate Huntington mystery series, The Kate on Vacation novellas, and the Marcia Banks and Buddy cozy mysteries, plus a guidebook for novice writers, Someday Is Here! A Beginner’s Guide to Writing and Publishing Your First Book. She also writes romantic suspense under the pen name Jessica Dale.

Take it away Kassandra…

Writing to heal was what got me truly started as a fiction author.

Oh, I’ve always loved to write. I’d written quite a few stories through the years, plus some bad poetry, and I’d started more than one novel. But the inspiration for the first one that I actually finished, the one that would eventually become Book 1 in my first mystery series, occurred when a friendship ended abruptly.

The friend was a male lawyer with whom I’d shared a few cases—situations where one of my psychotherapy clients was dealing with some legal mess, such as a divorce. And over time, he and I had become friends.

And then we weren’t, and I realized I had seriously misjudged his level of mental health. After the friendship imploded, I thought, “Darn it! If I can’t have a healthy platonic friendship in real life, I’m going to create one.”

So I started writing the story, Multiple Motives, in which a female psychotherapist and a male lawyer are good friends, and someone has a murderous grudge against both of them. (That last part didn’t happen in real life. -grin-) Another thing that didn’t happen in real life, but does in the book, is that the bad things that occur in the characters’ lives make their friendship stronger, rather than destroying it.

Writing that novel helped me heal from the painful ending of that friendship. It fulfilled several of the purposes of writing to heal:

Clarifying and Venting Emotions—Why Is That Important?

In Multiple Motives, my character Kate realizes just how important her friend is to her, and then when he is in danger, she realizes what a black hole his loss would create in her life. As I was writing this story, as she was feeling those intense ups and downs, I was right there with her. It was quite cathartic.

But why is it that we feel better when we vent a negative feeling?

The English word emotion derives from the Latin exmovere, which means “to move out from” or “stir up.” This captures the essence of emotions, that they have to get stirred up and move out of our systems.

If they don’t, if they stay trapped inside, they cause emotional problems like displaced anger, depression, anxiety, etc., and can even contribute to stress-related diseases. But in order for an emotion to truly dissipate, three things have to happen:


1. The situation that caused the emotion has to be resolved in some way. Otherwise, the emotion will just build back up again.
2. The real emotion and it’s real cause need to be acknowledged.
3. The emotion needs to be expressed in some way (although not necessarily toward the person who caused it; this isn’t always helpful).

So if you’re mad at your boss, and you come home and kick your dog, that won’t really accomplish much (except add some guilt for kicking the poor dog). But if you do something to resolve the cause (change jobs, confront your boss, decide he’s a jerk and ignore him, etc.) and you acknowledge that you’re really mad at him, not your dog, and then you vent that feeling. Now you will feel better.

Caution #1: There needs to be a certain amount of self-awareness when we are writing to heal. If I hadn’t acknowledged that I was writing about my real-life friendship, the venting wouldn’t have been nearly as effective.

Telling Our Story—Why It’s Important to Be Heard


Human beings have been storytellers since the beginning of time. Our ancestors wove tales around the campfire to entertain, to educate, and to pass along the culture. But also to be heard, to have their experiences validated.

Somehow telling one’s story, and feeling that others have heard it, is empowering. It says “yes, this experience happened, and yes, it was part of what shaped you, but it doesn’t have to define you.”

This is the whole premise behind support groups and 12-step programs. We feel stronger, more solid, when our experiences are validated, and then we can begin to move past them.

I’m currently co-authoring a memoir by a young man. We haven’t settled on a title yet, but the subtitle will be “Memoir of a Psychopath’s Son.” From that, you can probably imagine what his childhood was like.

For him, this is about telling his story, having the world know what he went through. And he is so motivated to do this that he is willing to go through it all again, in order to get it down on paper.

That has gotten easier for him over time, which hasn’t surprised me. And I’ve seen other signs of his healing as we have gone along, as he’s told his story to me, and imagined others reading his memoir.

Caution #2: If we use blogging or memoir-writing to tell our story, we need to be braced for the fact that there will be some who do not validate us. For their own reasons—maybe we’ve struck too close to their own hidden pain—they may denounce and attack instead. Also, regarding blogging in particular, once something is out in cyberspace, it is out there forever.

(Here's more on The Cathartic Novel – an Editor's Perspective)

Creating a Different Outcome—How Does That Work?


In Multiple Motives, I got a chance to make things come out differently. The platonic friendship survives adversity, and ends up stronger than ever.

But how is that healthy, you might ask, if you’re just pretending it ended in a different way? Isn’t that denial?

Well, it could be, if one didn’t first acknowledge and vent the negative feelings about what really happened. That’s the crucial first step in healing.

But after that, imagining a different outcome can actually change the emotional charge on the event. To understand this, it helps to know a bit about how and where the human brain processes certain things.

In most people, the left hemisphere is the more logical, analytical and verbal part of the brain. It thinks in words. The right hemisphere is more global, intuitive and imaginative, and it thinks in images. It also processes modulations in sound.

When we imagine a different outcome for a negative event, the right hemisphere processes that imagined outcome and the emotional charge is changed. But the left hemisphere still remembers what actually happened.

So now, whenever I think about my ex-friend, I can see his face and intellectually remember my hurt feelings. But the created image of my lawyer-friend character also pops up in my mind, and I feel Kate’s warm feelings toward him.

Caution #3: Again, we cannot side-step the “acknowledging and venting the emotions” piece. If we jump right to creating a different outcome, pretending to ourselves that this is what really happened, then that is denial, not healing.

Finding Meaning in the Pain


Look at how many loved ones of those lost to a certain illness or to violence then go on to start some kind of organization to help others struggling with similar tragedies. They are finding meaning in the pain.

This is considered an advanced level of healing in the trauma-recovery field (my specialty as a therapist).

One is that finding meaning in the pain is unique to each person, so there is no specific technique that will make this happen. And it’s not going to happen until we’re at a certain place in our healing process.

But I believe that writing to heal can increase our chances of reaching this advanced goal. As fiction writers, for example, we can use our pain to write realistic characters. And we can empower ourselves, and our readers, by empowering our heroes and heroines to overcome the tragedies and obstacles of life.

Which brings us to one of the main ways that we might find meaning in the pain...

Paying It Forward to Others Experiencing Something Similar


When someone is dealing with a bad experience, a traumatic event, they often feel isolated. They may assume that this bad thing has only happened to them, or that they did something to cause it.

When they read—in a book or a blog or a poem—about others experiencing similar trauma, that’s very validating. They can begin to believe that they aren’t alone, and that maybe they didn’t cause what happened to them.

Blogs are particularly powerful here, because they are interactive. Readers can comment and validate the blogger’s experience as well.

My life-calling has been to help people understand their psyches better so that they can lead healthier and happier lives—first as a psychotherapist, then as a college professor and now as a fiction writer. I’ve channeled the pain from the trauma in my own life into that process. And I’ve had many satisfying moments in each of those roles, when I felt like I was paying it forward.

So far, the best of those moments as a writer was when Multiple Motives received a review from a woman who had recently lost her husband. (Spoiler Alert: Kate’s first husband is the murder victim in this book.) In the review, this widow talked about being stuck in “survivor mode” for some time and that the way Kate handled her grief not only resonated with her, but also helped her let go of the guilt that she couldn’t somehow prevent her husband’s death.

For my memoir co-author, the paying it forward is about showing the world how easily psychopaths can hide behind a facade of faked emotions and seem quite “normal,” while their families, and those they deem to be enemies, encounter a very different person.

A Final Note and Caution:


I’ve mentioned self-awareness a couple of times. This doesn’t mean that one has to turn writing into a therapy session. By all means, let the words flow, especially in the first draft.

The self-awareness can wait until the editing process. That was when I truly realized, as I cried during an intense scene between Kate and her friend, that I was vicariously grieving my lost friendship.

And as we edit, it’s also a good idea to be mindful of what we are putting out there in the world. If a part of your own life story, your own tragedies or trauma, your own pain is in the story (and hopefully it is, because that’s what makes for a great story), make sure it is a part that you are willing to have exposed... and that you are ready to “stand in the truth” of your story, even if some of its readers don’t get it (because not all of them will).

About Someday Is Here! A Beginner’s Guide to Writing and Publishing Your First Book

This easy-to-read, how-to guide is full of both practical advice and emotional support. Psychotherapist turned successful mystery writer, Kassandra Lamb walks the path with novice writers, pointing out pitfalls along the way, some of which she discovered through stumbled-head-first-into-them experience. A must-read for new authors who aren’t sure what they’re getting themselves into.