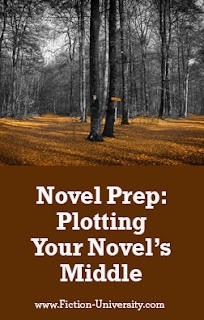 Continuing with the annual NaNo prep posts...we dive into the turning points and problems of writing your novel's middle.


Middles might be the most common tough spot for writers, and with good reason. The middle makes up half the novel, and it’s where all the heavy plot workings happen. We usually have a decent idea of how our stories start, and roughly how they end, but that middle? What do we put in there? That often eludes us.

This is when a lot of novels start to bog down, so there’s a good chance many NaNo writers will stumble here. But don’t worry, because I know a great trick to overcome middle woes. The Mid-Point Reversal!

This is a major event that happens in the middle of your novel that helps bridge the gap between the end of the beginning and the beginning of the end (act one and act three for those using the Three Act Structure). It effectively breaks your three acts into four acts, making each section a little easier to manage.

The mid-point reversal is what you’ll be working toward as you start the middle. At the end of the beginning, your protagonist has just made a decision and is about to act on that choice. They have a goal that is connected to the core conflict of your novel. The protagonist will start trying to solve that problem and things will go wrong. Their world will be turned upside down. Things they thought they knew won’t be true. They’ll start looking for help as this problem gets bigger and bigger, and the stakes get higher and higher.

This is key to a good middle: escalation.

If all you do is throw a lot of "stuff" into your story, it’ll read like a lot of random events happening that doesn’t go anywhere. You want to look for things that will keep your story moving and raise your stakes at the same time. Let your protagonist face choices that matter to make readers care about the outcomes. This is where the subplots and character arcs really kick in. You’ve setup a lot of events in the beginning, now it’s time to let them play out and cause trouble.

But back to the mid-point reversal…

The first half the middle is all about the protagonist fully throwing themselves into the problem. They’re making a commitment, gathering friends, facing off against the bad guy and/or his minions (whether literally or metaphorically if you have a man vs nature (or similar) conflict). Then something happens that sends the story sideways. 4Something the reader didn’t see coming that changes everything the protagonist just did. It makes it all harder, mean more, turns out it was the wrong thing to do, whatever works for your story. The mid-point reversal shakes things up and kicks the stakes up again so you have something to work with for the second half of the middle.

The first half of your middle will unfold generally like this:

Protagonist acts on decision made at end of beginning – choice leads to a problem (often subplot related) and forces protagonist to make another choice – protagonist realizes problem is bigger and needs some help (often shows a weakness of the protagonist they need to overcome), or help appears in a problematic way to cause even more conflict (possibly another subplot or character arc) – protagonist discovers a secret or gathers information regarding problem/bad guy and decides to do something, but there’s a risk (raises stakes) – protagonist (and friends) act on that info, thinking they’re going to be victorious – something unexpected happens and the story goes sideways, leaving the protagonist and their friends in serious trouble (either physically or emotionally).

The number of subplots and characters arcs will be determined by how large your book and story are. I’ve found that having the subplots conflict with the core conflict and main goal work very well to keep a tight plot and the story moving. The subplot might get them what they need (internal goal), but not what they want (external goal). All your various story arcs (plot, character, theme etc) will unfold in the middle as well, both setting up victories and failures for your protagonist to experience in the ending.

After you’ve totally shaken your protagonist’s world, it’s time to move on to the second half of the middle. Look back at your outline sheet and find the thing you wrote down for “second major crisis.” This is what you’ll be working toward now.

The second half of the middle is different from the first half, because your characters are feeling pretty dejected. Things have not gone well and they’re sure all is lost (it isn’t, that comes later during that crisis). They’re scrambling to regroup, retreat, and deal with the major curveball that just hit them. Often, there’s a ticking clock that’s making everything even harder now. Something that requires them to succeed before something horrible happens. By the end of the middle, you’ve positioned your protagonist so that they only choice they have is to face the bad guy. And it won’t be pretty.

Here’s a general overview of the second half of the middle:

Protagonist scrambles to deal with the events (or discovery) that just happened in the MPR – any upper hands achieved are gone and the bad guys close in – friends desert or die, those believed to be trustworthy turn out not to be (betrayals might occur here) – protagonist gets more and more determined to win at any cost, setting up a possible major sacrifice later – ticking clock is introduced if applicable, raising the stakes again – subplots cause extra trouble and put the protagonist under tremendous emotional pressure – protagonist feels that all is lost and there’s no way they can win – protagonist goes through deep soul searching (often accompanied by an event to trigger this) – major step of protagonist’s character arc is achieved - protagonist realizes that they only way to succeed is to risk it all – protagonist decides to take the fight to the bad guy in some spectacular way (or go on the offensive of the bad guy has already brought the fight to them).

By the end of the middle you’re ready for the end. Now, the middle doesn’t end with the climax, but the beginning of what leads to the climax. You’ve set up everything so the protagonist is ready to march toward the ending and that final showdown with the antagonist.

Next, we’ll take a look at the novel's end.

What issues do you struggle with in the middle? Do you have a mid-point reversal?