Here’s the Pitch—It’s a Hit! Crafting Your Novel's Pitch Line 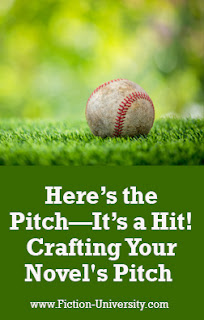 A great pitch line is useful for more than just selling your novel.

Pitching your novel makes most writers cringe, but it's actually one of the first things we learn to do. Telling someone what our story is about happens even before we write it. A pitch is just a more professional version of that.

I’ve chatted about pitches before, so let’s cover some new ground today.

A pitch means several things (the terminology is used interchangeably), so let's clarify what I mean first.

A one-line pitch is the elevator pitch.

It's what you say when someone asks "what's your book about?" A pitch paragraph is the entire description of the novel (and the bulk of your query). A query hook is the same thing. I'm talking about one-lines pitches in this article. They can be either spoken or written.

Now let’s look at what makes a good one-line pitch.


One sentence usually, because you have to be able to whip that sucker out every time someone asks, “So, what’s your book about?” This holds true even after you publish (actually, even more so after you publish).

A common mistake with pitches it to make it "one sentence" in the technical sense, but it's not something you can actually say in one breath. One sentence on paper isn't the same as one spoken sentence. I can write a 67-word one-sentence pitch I couldn't recite without a pause.

No one can remember a long pitch.

2. It conveys the core conflict of the novel.


No matter how many other cool subplots and themes you have in the story, the core conflict is the big kahuna driving your plot. Note the word “conflict.” Unless it's a very character-driven novel, character arcs usually don’t play a strong role here, even though they are important to the book itself. Which sounds more compelling?


The story of a girl who travels a magical land with three new friends and discovers there’s no place like home. Or…

A farm girl must evade a vengeful witch to help her dysfunctional friends and find her own way home.

Or my personal favorite… Transported to a surreal landscape, a young girl kills the first person she meets and then teams up with three strangers to kill again (quoted from John Scalzi’s “accurate but misleading” AMC column)

Of course, you do have to make sure your pitch accurately describes your novel. If your pitch is accurate but misleading, you’re going to disappoint your reader. Be true to your story, but also look for the most compelling aspects of your conflict.

3. You can visualize the book from one sentence.


This is what they mean by “high concept.” You instantly get a sense of the entire book from that one sentence. While not everything is going to be high concept, the more evocative your pitch, the more likely you’ll have someone respond “ooo that sounds good.”

So, how do you write a high concept pitch?


Step One: Identify who your protagonist is and what’s unique about them.

Try listing three or four things you might use in your pitch. The most critical things someone would need to know about this person (or people if you have an ensemble cast).

Step Two: Identify the most important things about your story.

Make of list of three or four of these. They can be anything you want, not just plot or world details. Next, if you had to choose just one of those details to tell someone, which would it be? Odds are this is your core conflict, but it could be details about the situation.

Step Three: Identify the twist in your story.

You have an interesting person with an interesting trait, and something interesting about the world they live in or the situation they find themselves in. Now list how these two things are connected.

Your conflict will come into play here, and there’s a good chance it’ll be your inciting event. Why? Because inciting events are the setups for your novel, and that when the “line in the sand” is drawn. Character faces problem and decides to act. They cross that line and the story begins.

Step Four: Put it all together so it sounds interesting.

This is the hard part, because “interesting” is so subjective. You can have all the right pieces in the right places and still not have a pitch that will make anyone want to read the book. Formulas will only get you so far here, because uninteresting details make for an uninteresting pitch.

One reader did ask me how to write a pitch that sounded like you and not like all the other writers out there. Truth is, one-line pitches do sound similar. While your query will capture your voice and style, the pitch itself follows a basic structure. It’s okay if it sounds like something you’d read in TV Guide. That means you’re probably doing it right.

How do you figure out what a good pitch sounds like?


Believe it or not, a great place to read a lot of pitches is Netflix. On their site, you can click on the green plus sign on the left of the movie graphic and it gives you the pitch line description about the movie. Some are pretty good and make you want to read more. Others are pretty bad and don’t grab you at all. You can also try the Internet Movie Database for quick pitches for your favorite movies.

Sadly, there is no similar site for books, which is a shame.

Let’s look at a few random pitches from movies:


High school student Dave decides to transform himself into a masked crime fighter – and becomes an Internet star. (Kick Ass)

When you break this down you get: High school student Dave [The protagonist] decides to transform himself into a masked crime fighter [What’s important about the story ]– and becomes an Internet star [The twist. The anonymous youth becomes famous.]


An elite assassin learns that someone from his past has put out a contract for his now-tranquil life. (Killers)

Breaks down to: An elite assassin [The protagonist] learns that someone from his past has put out a contract for his now-tranquil life. [What’s important about the story]

See what’s missing? There’s no twist here. No sense of conflict. Where’s the “and then?” Having seen this movie (which was better than I expected) I know the twist is that he then has to explain it to his kinda-boring wife. The “never longed for excitement” wife now has to dive into the “way too much excitement” life of her assassin husband. Just as he was trying to get out of that life by marrying her. Granted, that’s a lot to sum up in a pitch, but it can be done. Remember, you don’t have to say all of that, just suggest it.


To save 10-year-old Lilith from abusive parents, a social worker brings the girl into her own home – only to learn Lilith isn’t what she seems. (Case 39)

Break it down: To save 10-year-old Lilith from abusive parents, [What’s important to the story] a social worker [The protagonist] brings the girl into her own home [A second detail]– only to learn Lilith isn’t what she seems. [The twist. I know nothing about this movie besides this pitch, but I can already see the girl is the trouble here, not the parents. Odds are the parents are fighting for their lives in some way.]

This one has all the right pieces, and a little extra to show that you do have some flexibility with these. There’s conflict and a suggestion of how the movie is going to unfold.

However, there’s nothing unique enough here to make me want to see it. The plot is pretty common, and “isn’t what she seems” can be any number of things. This is a great example of a pitch that uses a cliché that doesn’t actually help it any. It sounds cool at a glance, but the more you think about it, the more you realize how little it says about the story.

Another one along these lines…


Slacker Jeff “The Dude” Lebowski gets involved in a gargantuan mess of events when he’s mistaken for another man named Lebowski. (The Big Lebowski)

Break it down: Slacker Jeff “The Dude” Lebowski [The protagonist] gets involved in a gargantuan mess of events when he’s mistaken for another man named Lebowski. [What’s important to the story]

And again we’re missing the twist. See how flat a story can be without it? Also note that this is basically “a guy gets into trouble due to a mistaken identity.” Do you have any idea what the story is past that? Is it a comedy? A drama? Is this a series of hilarious shenanigans or a gripping drama? No clue based on this, yet this film is a well-loved cult classic, so obviously there's more here. But if this is all you know about it, you might never bother to give it a try. A good pitch tells you enough to get the whole book.

Let’s look at one I think works fairly well.


A meek bank teller discovers a magical ancient mask that unleashes his deepest desires -- and gives him superhuman abilities to act on them. (The Mask)

Break it down: A meek bank teller [The protagonist] discovers a magical ancient mask that unleashes his deepest desires [What’s important to the story] -- and gives him superhuman abilities to act on them. [The twist]

What I like about this pitch is the word choice. “Meek” conjures up a particular type of person. “Unleashes” suggests setting something free. Unleashing the deepest desires of a meek person has a lot of potential for conflict. Pair that with the twist – superhuman abilities – and you suddenly see where this can go. Meek goes wild. It accomplishes a lot by the words chosen.

Do you need a pitch line in your query?


There’s a lot of advice that says open your query with your pitch. Personally, I think a pitch in a query is like introducing yourself after you’ve been introduced. A query and a pitch do the same thing, just in different formats. Save the space for a few great paragraphs that describe your novel. The one-line pitch is more for those elevator encounters and when folks ask you what the book is about. Opinions are mixed here, so if you want to open your query with your pitch line, feel free. But you don’t have to. There’s just as much advice about jumping right to the hook as starting with a pitch.

Whatever you choose, being able to describe your novel in one sentence is a skill you’ll find valuable the entire life of the book.

Do you have a pitch line? What do you find most frustrating about them? Want feedback on yours? Feel free to share.