Tips to Understand and Control Your Novel’s Pacing 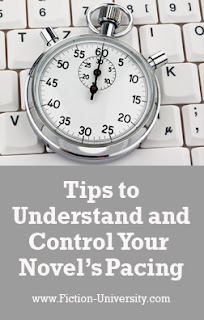 In some ways, pacing is more critical to a novel than plot.

My husband isn't a kidlit reader, and when he read my novel The Shifter for the first time, he said,

"Wow, you do stuff in three pages that would take an adult book three chapters."

An exaggeration, but there's truth in there. MG/YA is typically faster paced than adult work, because kids won't put up with something that drags. If you can't grab and hold their attention, you're a goner.

Pacing is one way to keep that attention.

This is one reason why “bad books” still make the bestseller lists. A good story matched with solid pacing pulls readers through the novel even if the writing is so-so. There’s always something to learn or discover and rarely—if ever—and urge to skim.

A badly paced novel lacks that sense of discovery and often goes long stretches where nothing happens to engage readers. It’s too slow and starts to bore them, it’s too fast and doesn’t give them time to absorb what’s being read, or it’s inconsistent and has barely enough well-paced scenes to keep readers interested (which typically leads to poor reviews).

What exactly is pacing? It's the speed of your prose.


Different types of sentences read at different speeds. So do certain events. The adage, "time flies when you're having fun" really does apply, as things we're into fly by, and things we're not as invested in bog us down. Just like your favorite class in school was too short, but your least favorite was three times as long.

You control your pacing by how you organize information for the reader.


Dialogue tends to read quickly because it’s multiple short sentences in a row and less information to retain. Descriptive passages tend to read more slowly, because there use longer sentences and require more focus.

But it isn't that simple, because fast-paced dialogue that’s basically two people saying hello and exchanging small talk is boring and slows the story, even if the dialogue itself reads quickly. Gripping description that sets the mood and clearly shows something about to happen can grab a reader, even if it takes longer to read.

It's how you put it all together that determines the pace.

Use shorter sentences to pick up the pace. They're quick and easy to read. They give information fast, so we don't have to remember much per sentence. They can also get the heart pumping, as they simulate something happening quickly. That's why action scenes are often filled with short punchy sentences.

Use longer sentences to slow the pace down. It takes longer to read a sentence with multiple clauses and information in it, because we have to parse what we’ve read and carefully consider what it said. This is doubly true if a paragraph contains several long and complex sentences, because they typically build off one another and the entire paragraph is one large thought building to a point. Quite often, the language itself is written in a way that draws attention to the style, expecting readers to savor the words themselves as well as what those words say.

Did you notice the difference in pacing between those two paragraphs? Odds are you read through the first pretty quickly. The second probably took a little more time. You may have even had to re-read a line or two.

How much information readers need to absorb also influences pacing.

That's why dialogue reads so quickly. We read it, understand it, and move on. We're trained to absorb verbal information since that’s how we communicate on a daily basis. It’s the same with action scenes, as the information offered is visual and direct. Someone acts, something happens. There's not a lot of room for interpretation, so it's also easy to absorb.

Description is the opposite. Throw a lot of details at readers, and they're forced to slow down. They start building images in their minds with the first detail, but as more details are added, they have to reevaluate what they “see” and understand. They might even mentally hold onto details until they have an image solid in their heads. It only takes a second or two, but it slows the mind down and they notice slow spots even if they don't know why. 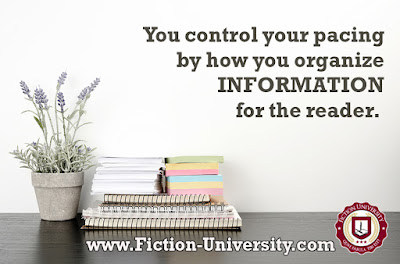 Does that mean you always want a fast pace?

Nope. Breakneck prose is often exhausting to read. So much is flung at you so fast it becomes a blur and difficult to retain anything you read. Even if there is less information to remember, it went by too quickly to really absorb it.

As with most things, balance and moderation work best.

The right pace is determined by how much information readers needs to absorb. If the details are easy to remember and don’t require a lot of thought, a lot more can happen without losing them. If readers need time to understand what they’re reading, a slowdown might be the right call.

There are other ways to maintain a strong narrative drive, even in a slower scene. Try tapping into the emotional state of your characters. If they're worried about something, that can keep readers worried and wondering, too. Secrets or mysteries dangled like carrots can also keep readers engaged during a slower scene.

Slower-paced scenes are good places to play up the who and why, while faster-paced action scenes usually focus on the what and how.

(Here’s more on The Science of Pacing: 3 Tips on Pacing Your Novel)

And remember…different genres use different paces.

There is no one-size-fits-all for pacing. A thriller requires a much faster pace than a literary novel, so make sure you understand what the right pace is for the genre you write in.

Fast or slow, use the right pace for the job.

Your novel won’t have just one pace. It will rise and fall as the novel builds, often mirroring the emotional state you want your readers to feel. You’ll slow down when you want them to feel emotional or reflective, but pick up when you want them breathless and excited. The key is to move fast enough to engage them, but slowly enough to ensure they can keep up with the story.

EXERCISE FOR YOU: Take five minutes and consider how your novel is paced. Is it pulling readers through the story or making them slog through it? Does it match your genre?

Do you prefer a fast or slow pace? Have you noticed the pacing styles for the different genres you read?