How to Write Rich Characterization: A Cheat-Sheet 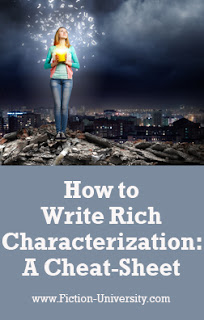 Part of The How They Do It Series
JH: Wonderfully rich characters typically leads to a wonderfully rich novel. Bonnie Randall shares tips on how to reveal the depth and richness of your characters.

A character is infinitely more than just who the author says they are. Like their living, breathing counterparts, fictional characters often reveal themselves in incidental ways.
Here are five quick ways to help readers make powerful inferences about your characters:

My mom used to say you could see everything you needed to know about a man just by looking at his shoes, a crazy philosophy that actually holds water. Preferences and choices reveal much about who we are, where we come from, what we value…and what we don’t. Our clothes, music, art, vehicles, etc, are often as revealing as our actions and words.

The same can be true for our characters, and what’s more, these subtle tells can also help to create atmosphere, tone, and depth to the individuals who populate our prose. Consider Jennifer Hillier’s Jar Of Hearts. The heroine, morally ambiguous Geo, has an incidental penchant for alternative, industrial rock music, a tiny detail, yet it works as a tell to the ominous, dark nature of this disturbed, disturbing woman.
So what does your character have, like, or do that seems like a throwaway little detail, yet really offers a clue as to who they are? Brainstorm it!

2. Give Them Traits (Seemingly) Incongruent With Who They Are

An artist who chooses to dress in caftans and scarves might be typical or expected, but what about the artist who favors turtlenecks and chinos, is a conservative instead of the liberal you’d expect?
Incongruent traits broaden the scope of a character, creating intrigue and interest which in turn propels the reader to want to get to know them, understand them, and discover what makes them tick. (The added bonus here is that this technique prevents the character from devolving into a ho-hum cliché).

Carlotta Mayfair, in Anne Rice’s The Witching Hour, is perhaps the most diabolical and cruel of any of the lengthy list of Mayfair Witches, yet she is also devoutly Catholic, stiff with piety. A fascinating mismatch of (seemingly) opposing traits.

(Here's more on An Exercise in Layering & Depth: 25 Questions to Ask Your Characters)

3. Assure That Their Perceptions and World View Reflect Their Own Unique Scope of Knowledge & Experiences

A pirate is not going to feel it in his tummy, he’s going to know it in his gut. The aforementioned artist is going to see a sunset as a palette of autumn, racing over the western horizon…but the aristocrat will see the sun spilling cognac across the sky as it sinks. A mechanic doesn’t see Granny’s hair as a distinguished gleam of silver, he thinks it’s the color of a polished piston. And his eight year old daughter does not see chrysanthemums growing in Granny’s garden—she marvels at how Granny can grow cotton candy! Is she a good witch like in some of her bedtime stories? (Maybe).

4. Allow Them To Be Seen Through Another Character’s Lens

This one offers more bang for the buck because the nuance revealed by one character will offer insight into the other…and vice versa. Easter Quilby, the youthful protagonist in Wiley Cash’s This Dark Road To Mercy says her deadbeat Dad, Wade, looks ‘like a tall scarecrow who was somehow skinny and flabby all at the same time.’ What a visual! And what a reveal about Easter; scarecrows are hardly tough, they’re kind of goofy, and they’re certainly nothing most folks would respect. Kind of the same way she feels about her Dad, but does not yet, at only eleven, have the emotional acumen to say directly.

(Here's more on Intuiting Your Character: A Guided Imagery Exercise)

5. They Imply As Many Things As They Say

This is sort of the dialogue version of show versus tell, but don’t let it be limiting; a character can flat-out say some things just as often as they indicate others. Characterization is, after all, an equal dance between the direct and the indirect. That said, I am trying this technique in my current work-in-progress, The Shadow Collector, when Owen, having recently returned to his hometown, attends the local diner with his old buddy:

“Your Mom always made the best peach crumble pie in this Valley.”

Rob blinked, visibly taken aback. “Uh…good, I guess. I dropped by shortly before her and your Dad went to Europe.”

Awkward! Later on, with the same technique, we learn a little more about Owen and his Mom when he happens upon heroine Natalya, leaving the graveyard:

Outside the cemetery she bowed her head, still as regal as a Tsarina, but also…pensive. A word his mother always used, and wasn’t it funny how you could resent a word just because of the person who used to say it? He opened the throttle, rumbled past the Tsarina, purposefully loud. Then he glanced at her in his rearview.

So here we get an even clearer idea of how Owen feels about his mother, and poor Natalya—guilty by an association that only exists in his mind…and subject to his very passive aggressive action of roaring his Harley past her.

So many ways to craft rich, detailed characters. I hope this little cheat-sheet adds to the all the strategies and techniques you already employ.