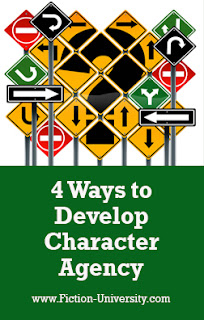 Many novels fail because their protagonist lacks agency.

Early on in my writing career, I’d never heard the term “agency.” Then I started hearing it everywhere. I suspect I’d crossed a learning threshold and had begun reading more advanced blogs and books, and had stumbled into a higher level of writing advice than I had previously seen.

To paraphrase regular guest author, Rochelle Melander, I had leveled up as a writer.

These days, I hear folks talking about agency all the time, and the word has become part of my writing vocabulary. But I’d bet plenty of other writers still encounter it and have no idea what it is, or they get the general gist of it in context, but aren’t really sure what to do with it.

Imagine my shock when I realized I’d never once written about it here. 3,000 articles on this site, and not a single one on character agency.

Agency is the reason your protagonist bothers to get up in the morning.

It’s like turbo-charged motivation, but on a larger scale. It’s the core drive of their personality, their ambition, the sense that they’re causing the story to happen by living their life and making choices in that life. They’re the ones in control of the plot, not the author, and their lives and actions matter to them.

A character with agency is proactive (creating plot through choices), not reactive (doing what plot tells them), and more than just a literary actor on a stage reading their lines.

Without agency, a character is just as much a story prop as a piece of furniture in the room.

If there’s no true motivation behind the protagonist’s actions, and they don’t really have any reason to act in the novel, the plot becomes a series of “stuff that happens” and not a story. It’s hard for readers to care about the novel’s problems, because the protagonist doesn’t even care. The plot feels predictable because there are no impossible choices with real stakes being made, just a protagonist who’s following the road signs to the end of the book.

And they aren’t even enjoying the scenery on the way.

Here are four ways to strengthen the character agency in your novel:

1. Ask your protagonist about their hopes and dreams—and really listen. 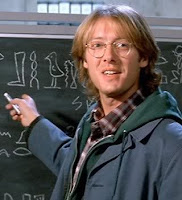 For example, in the movie Stargate, Danial Jackson is an archaeologist with a crazy theory that someone other than the Egyptians built the pyramids. His peers think he’s nuts, but he’s sure he’s right, and he dreams of proving his theories one day. This dream gives him the agency he needs when offered a chance to translate ancient hieroglyphs that will ultimately prove he was right. He doesn’t know that at first, but the offer coincides with his dreams.

2. Force them to be honest about their motives.

Identify why the protagonist wants that goal. This is where the sense of agency often falls flat, because the protagonist doesn’t really want what they spend all novel going after. They have surface motives, such as “save the world,” but if you ask them why, they shrug and answer, “Reasons.”

Did Daniel care if the Air Force solved the mystery of the stargate? No. He just wanted to get paid (at first). But the more he learned about it, the more it connected to his dream. He pursued the plot’s goals because they led him toward his own personal dream of figuring out who built the pyramids.

3. Sift through their bull and find the truth.

At the core of a great protagonist is a need to solve the novel’s problem that sometimes has little to do with actually solving the problem. Resolving that issue is just a means to achieve what the protagonist really wants (or really needs). Identify which need is driving the protagonist to act in the novel, and make sure that’s behind their motives.

Just like Daniel’s interest in proving his theories correct drove him to figure out how the stargate worked, in the end, we see that it wasn’t about that at all. It was about knowing the truth. When offered an opportunity to go home or stay with the “ancient Egyptians” and the culture he’d studied, he chose to stay. (Yes, he also fell in love, but he could have easily brought her home with him). It was his need to understand that drove him. At his core, Daniel's agency came from his need to know the true about the pyramids and this ancient culture.

4. Ask where they can make a real difference.

This is where is all comes together. A character with agency changes how the novel unfolds by both their actions, and their reasons for acting. What they do and why they do it matters. Strengthen your character’s agency by adding moments in the story where their choices change how the story unfolds.

For example, Daniel’s need to know what’s through the stargate makes him overconfident, and he says “yes” when asked if he can get the military team home again if they go through. He assumes he’ll find writings on the other side, but he doesn’t know that. The plot moves forward because of Daniel’s choice.

When he’s wrong, it’s more than just his need to get everyone home that drives him to look for more writings like the ones he found on Earth’s stargate. He also doesn’t understand why the answers to his question (who built the pyramids) isn’t there like he expected. Which in turn leads him to uncover that writing is banned and why, and why there are humans on another planet, and eventually sparks the same kind of rebellion that happened on Earth thousands of years ago. Which answers his questions about the pyramids and is the key to getting everyone home.

His choices, made from his personal wants and needs, overlapped with the plot’s goals and affected how the story turned out. If Daniel hadn’t been hired, the Air Force never would have figured out the stargate. If he hadn’t gone through, they wouldn’t have befriended the locals, found the answers, and save the day. His mistakes, as well as his successes, changed how the story unfolded. 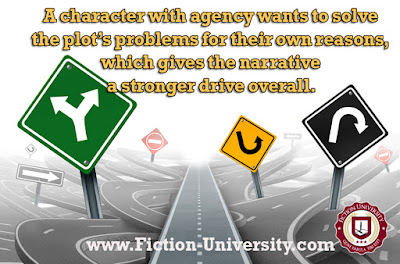 Testing for agency is actually fairly easy. Ask:
If you discover any red flags, spend some time developing the characters. Figure out how they fit into the story and how their choices, motivated by their dreams and needs, can affect that story. You might have to tweak the plot a little as well, but it will be worth it.

A character with agency wants to solve the plot’s problems for their own reasons, which gives the narrative a stronger drive overall.

And a stronger drive leads to more tension, more reader anticipation, and a novel readers can’t put down. A character who wants to know how it all turns out, and acts to make it all turn out the way they want it to, makes readers want the same thing.

EXERCISE FOR YOU: Look at your protagonist and other main characters and determine if they have agency. Are they making the novel happen through their choices and personal needs, or are they acting out the plot? If they’re just actors on a page, examine their goals and figure out what they really want.

Does your protagonist have agency?
Find out more about conflict, stakes, and tension in my book, Understanding Conflict (And What It Really Means).