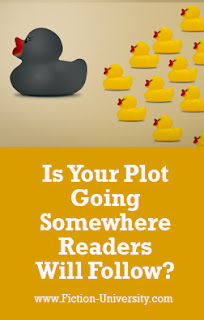 The first novel I ever wrote was all about the plot. This happened, and then that happened, and I explained how these awesome (I thought) characters discovered this cool mystery about the history behind my fantasy world.

The writing wasn’t half bad, and the idea itself was pretty cool (to me), but there was no story to speak of. My characters followed a predetermined path that explained how a situation came to pass. The surprises and twists came not from what my protagonist did, but only when I decided as the author to finally reveal a piece of information.

This was not a book anyone else wanted to read.

If you want readers to read your novel, give them a plot they want to follow.

Here’s a way to test your plot’s narrative drive. Look at each scene and ask:

What’s the protagonist trying to do?

This question helps you identify the goal in every scene. If you can’t answer this, then odds are the scene goal is either nonexistent or needs work. Knowing the protagonist’s goal ensures that the scene is an actual scene and not just the protagonist reflecting on something or spending too much time in their head.

It also shows you if the protagonist is being active (not reactive), that they’re moving the plot forward, and that there’s action going on to hold reader interest.

What is the protagonist trying to do? Break into the boss’s office and steal the file.

What’s keeping them from doing that?

This question helps you identify the conflict in the scene. If you can’t answer this, then odds are nothing (or no one) is trying to keep the protagonist from acting and there’s nothing for them to struggle against.

A lack of conflict can also indicate a protagonist who is just going through the motions and not affecting the plot. If there’s no risk of failure, then their actions don’t matter and what they do won’t make the reader care enough to read on.

What is keeping them from doing that? A locked door, witnesses, and a fear of getting caught and then fired.

What happens if they fail?

This question helps you identify the stakes. If you can’t answer this, odds are the scene doesn’t matter to the story. If there are no consequence for failure, and failing doesn’t change anything, then why is this scene in the novel?

The stakes are what holds the entire scene together because they make the goal worth pursuing and the conflict a problem worth worrying about.

What happens if they fail? They get fired, and possibly arrested. 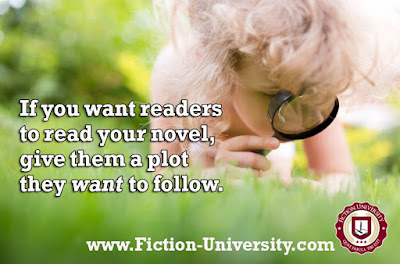 What happens if they succeed?

This question helps you identify the protagonist’s motivation. They’re trying to achieve a goal for this purpose. If you can’t answer this, odds are the protagonist has no story-driving reason to act, and is just acting because the plot needs them to.

This question also shows how the scene moves the plot to the next goal. If you can’t answer this, odds are the outcome of this scene doesn’t matter to the story. Success (and failure) should lead to the next goal, and give the story somewhere to go. The protagonist is after this goal in order to do…what?

What happens if they succeed? They get the file and prove the boss has been skimming, but now they need to expose him without implicating themselves.

Ask each question for every scene, and write down your answers. Don’t just think about the answers—the act of writing it down helps you clarify the details and gives you a mini-synopsis of the plot (bonus!).

Once it’s all down, you’ll see at a glance if the plot is holding up or if the novel is just a series of things happening. Each sentence should build on the previous goal and show story progression, and if it doesn’t—that’s a plot hole that needs filling.

For an example of this in action, let’s look at the opening scene of my teen fantasy, The Shifter.

What is the protagonist trying to do? Steal eggs for breakfast.

What is keeping her from doing that? A night guard, and the owner of the chicken in her hands has caught her in the act.

What happens if she fails? She goes hungry and ends up in prison.

What happens if she succeeds? She gets breakfast and has the energy to find a job for the day so she can pay her rent.

The next step is to combine these pieces and summarize the scene:

Nya is stealing eggs for breakfast when a night guard and the chicken rancher he works for catch her in the act and threaten to send her to prison. (Add new goal) She doesn’t want that, so she runs, trying to escape.

This is the essence of my opening scene. Notice how it naturally ends with a clear path to the next goal? Nya tries to try to escape so she doesn’t go to prison. Which leads to the next goal, and the next conflict, and the story unfolds with my protagonist driving the plot forward.

If the plot list looks like a series of random events, then you’ll probably need to strengthen the core plot and find a way to weave the events together into a coherent story.

While this is useful for revisions, it also very helpful during the planning or drafting stage. The answers also work as guides for each scene so you’re not staring at a blank page wondering where to start.

A strong plot draws readers in and makes them want to know what happens in the story.

It took a lot of bad drafts before I learned enough to plot a novel worth reading, and not just dramatize a series of events. Now I pay attention to how my scenes create a path my readers will want to follow, and reward them for taking that journey with me.

EXERCISE FOR YOU: Take five minutes and do a quick summary of your first three chapters to see if you have any holes, or need to tweak the GMC (goals—motivations—conflict) at all. When you have time, do this for the entire novel.

Is your plot leading your readers through a story or just showing them something that happened?