Are You Making This Character Flaw Mistake? 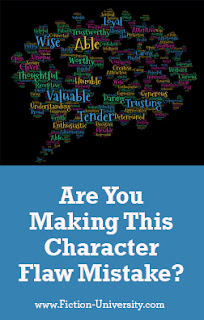 “Give your characters flaws” is one of the more common pieces of writing advice out there. It’s good advice, as flaws make characters more human and relatable, and the fatal flaw is a critical part of any character arc, but many writers make an easy mistake when creating them.

They think flaws have to be negative traits.

In many stories, the flaw is a negative trait that must be overcome, but it’s not always the case. And when it isn’t, the belief that all flaws are “bad” can cause a lot of frustration for a writer trying to find a plausible reason why the protagonist has a negative flaw that fits the plot, story, and character arc.

A good example here is the flaw in my current WIP—my protagonist cares about people too much.

Wait…what? Did you say she cares? How could that possibly be a flaw?

Well, she’s an undercover spy, and caring about the people she’s spying on is a bit of an issue. She’s not supposed to care, and this makes her mission a heck of a lot harder.

And that’s the key to a great character flaw—

It makes the protagonist’s goal harder to accomplish.

Using positive and negative traits opens up a lot more opportunities for interesting flaws for your characters. They don’t have to be bad behaviors, as long as they hinder the protagonist in some way. For example:

(Here’s more on ways to fix too perfect characters)

Widen your scope and consider the positive aspects of a character and how those traits might interfere with their goals.

Key Things to Think about When Creating Character Flaws


The best flaws aren’t usually random ones chosen before the story is developed. They play into the plot and character arc, and are picked for the trouble they’ll cause in the story. Whether your flaw is a positive or negative trait, choose ones that will also aid your plot and serve your story.

1. What trait would make their goals harder to accomplish?


Look at the things they need to do in the story and the people they’ll be interacting with. What traits would benefit these tasks? Now, consider traits that are the opposite of those as possible flaws. If they need to be clever, perhaps let them be a bit dense. If they need to have a thick skin, make them sensitive and compassionate.

(Here's more on finding the right flaws for your characters)

2. What trait would cause emotional problems with what they need to do?


This is a fun place for a flaw for any character struggling to maintain a facade or external persona, but inside is a totally different person. Acting tough when you’re gentle, being dumb when you’re smart, pretending you don’t care when you absolutely do—forcing someone to “live a lie” through their flaw has great story potential.

3. What trait would force them to change how they approach their problems or tasks?


Different problems require different approaches, so if you need your protagonist to manipulate others to achieve a goal, making him honest to a fault will be a problem for him. Traits that force a character out of her comfort zone is a good way to add additional conflict and tension to a scene, as well as put the character is a tough bind.

4. What trait is holding them back from being happy?


This is particularly vital in Person versus Self conflicts, when the whole point of the story is to get the protagonist to overcome their fatal flaw and be happy. While these types of flaws do tend to be more self-destructive, a positive trait that makes a character miserable is an interesting twist on the idea.

5. What trait works with the character arc?

Flawed characters create a deeper and richer story, and they’re usually a lot more fun to write. They have more ways and opportunities to screw up, cause trouble, and just make a mess of everything. Which is what every great plot needs.

Character flaws can come in many forms, so don’t be afraid to expand your search when developing your characters.

What are some of your favorite character flaws? What positive traits can you think of that would be good flaws?

Find out more about creating conflict and tension in my book, Understanding Conflict (And What It Really Means).