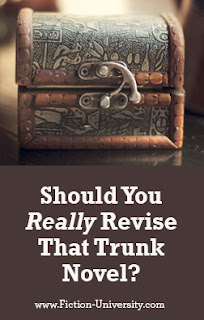 Some trunk novels really are worth going back to. The trick is identifying the salvageable ones.


The other day Romance University posted about why you should pull out the manuscript under your bed. It resonated with me, because earlier this year I returned to an old manuscript that had been poking at my brain for a month. It was a book I’d written almost eight years ago, revised a few times, gotten mixed and lukewarm feedback on, and had figured was an idea that just wasn’t ever going to work.

Yet I couldn’t stop thinking about it.

What triggered my desire to return to it, was an out-of-the-blue idea on how to make the premise I loved finally work—a prologue of all things. But it fit this particular book, and when I reread my earlier pages, I realized it had never been as bad as I’d thought. It had just been missing a few key elements.

Jump ahead eight months, and that manuscript is now with my agent. It needs a few more passes before it’ll be ready to submit to editors, but I was able to finish it and I’m quite happy with how it’s turning out. A manuscript I always feared was dead, wasn’t.

So what made this trunk novel different?


I was ready to write the book the way it needed to be written. When I first began this novel ten years ago, I didn’t have the necessary skills for this particular book. I was plot-focused writer, and this story required much stronger character skills than I possess at that time. But after a decade of study and practice, I was finally able to write the story I loved.

This happy ending won’t hold true for all manuscripts left behind, and I have several others I wouldn’t even attempt to try to resuscitate. But this book was different, because it wasn’t so much about the book’s failure, but my shortcomings as a writer at that time.

Should you revive an old manuscript?


If you have an old draft you keep thinking about, it’s worth taking a few minutes to consider if it’s worth going back to. Some things to ask:

1. Why did you stop working on it?


This is key for a left-behind manuscript. Not every idea is a good one, and some books just aren’t going to work no matter what we do. You may have abandoned it for a very good reason.

Was it a conflict issue? At the core, if the conflict isn’t strong the book probably won’t work. While some conflicts can be made stronger, a deep inherent flaw will likely never be overcome.

Were the characters weak? Sometimes we dive into a story before figuring out whose story it is. Identify this, and the story could suddenly work.

Was the idea boring? Ideas that seem exciting at first can run out of steam and stall. They might not play out the way we expected, or maybe they didn’t provide enough story to fill a whole book. We might also have grown as a writer or widened our knowledge of the genre and realized that “great idea” has actually been done to death.

Was it a technical issue? We all develop our skills at different paces in different areas, so it’s possible the skill you needed to write the book wasn’t there. If you’ve improved in that area, you might spot the problems immediately and see solutions you’d never considered before.

Was it personal? Life gets in the way sometimes, and that can sap our creative energy and focus. Maybe the novel was fine the entire time, but you were just in a bad place or needed a break that had nothing to do with writing.

Should you go back to it? If the reason you stopped is fixable, and the fix is something you want to write, yes. But if you still can’t see how to solve the original issues, let it stay in the trunk.

(Here’s more on being your own book doctor)

2. What about the idea intrigues you?


A manuscript worth a second chance is one that still makes you want to write it even after a lot of time has passed. It nags at you, pops into your head at weird times, or whenever you see something even vaguely similar, it brings back that desire to write it again.

Does the idea still appeal to you? Still loving the idea is vital to revitalizing an old manuscript, because if you’re only finishing it because it was done, or nearly done, or you don’t want to “waste it,” odds are it still won’t go anywhere.

Is the idea still relatively fresh? While there are no truly original ideas anymore, if your old manuscript is about a boy at wizard school or a girl who fights for her life in some type of reality entertainment, or anything that’s too close to a trend or concept that’s been copied dozens of times—maybe it’s better to let that one stay in the drawer. Unless…you’ve come up with a fresh take on that idea.

Should you go back to it? If you still love the idea and can’t stop thinking about it, yes. But if you merely like it, or can name a slew of books similar to it off the top of your head, it’s probably best to move on.

(Here’s more on the difference between idea, premise, plot, and story)

3. What would you do differently this time?


Be objective. If it didn’t work then, it won’t work now unless something has changed with you and your writing. You should be able to see where you went wrong and have a clear idea on how to fix it, otherwise you run a big risk of making the same mistakes again.

Does it fix what went wrong? Before you dive in and spend who knows how long just to wind up in the same spot, try outlining or summarizing the new direction. Does it fix the original problems?

Is the draft salvageable or do you need to start over? Reworking an old draft that didn’t work risks turning it into a Frankendraft (pieces of novel sewed together to form a plot, but it really doesn’t fit), so consider how you want to proceed carefully. Starting over can seem like more work, but not if it takes you three times longer to revise what’s there.

Should you go back to it? If you have a solid revision plan with a new direction, yes. But if you aren’t sure what to do and hope it’ll come to you as you write, it might be better to let it simmer a while longer.

(Here’s more on the difference between a revision, a rewrite, and a redraft)

Old manuscripts don’t have to wither and die if the reasons you stopped working on them have changed. If one is asking for a second chance, maybe it’s worth giving it another look. You might be ready to write it now.

Have you ever given an abandoned manuscript another chance? Do you have novels in the trunk you might go back to one day?