Is Your Novel All Premise and No Plot? 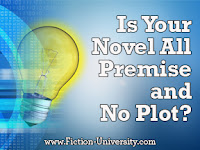 Ideas come to me all the time. I have a folder on my computer that’s nothing but ideas, and I add to it every time something hits me—either another new idea or something to flesh out an existing idea. It’s pushing 50 ideas right now, but that doesn’t mean I have 50 books waiting to be written. Most of these ideas are nothing more than premises.

And a premise isn’t a plot.

Without that plot (and the conflict at the core of it) there’s no book. Great ideas can make great books, but only if that idea includes a character with a problem that must be solved or they will suffer the consequences of that failure.

Quite often, a premise lacks at least one if not all three of these. It’s usually a great idea filled with lots of potential, but it’s all setup or setting and there’s no story. For example:


A farm girl gets transported by tornado to a magical world of talking animals, wizards, and witches.

What’s the goal here? Do you see any conflict? Are there any stakes? Is there an indication what the story is going to be about?

If you describe you book by premise only and can’t pinpoint the goal of the story, that’s a big red flag that there’s a problem with the book. If your protagonist isn’t trying to do anything, then what’s the point?

This is where a lot of story ideas fall flat (and why the book hits a wall around page 100 when you try to write it). The premise is good, but there’s nothing actually going on. There’s nothing to drive the plot or the story.

(Here's more on the difference between idea, premise, plot, and story)

Let’s take this premise and add a goal:


A farm girl transported by tornado to a magical world must travel to the capital city to ask a wizard for a way home.

Now the premise has direction. It’s a quest story, where the goal is to get something—the way home. But there’s still no conflict or stakes, so we don’t quite have what we need yet for solid plot. We still don’t know:
Just having a goal isn’t enough if there’s nothing standing in the way of that goal. The struggle to overcome obstacles is what keeps readers interested. They want to know how something will turn out. They want that conflict, be it an external obstacle or on internal problem (both is best). Something needs to be in the way of the protagonist achieving their goal.

(Here's more on taking your idea from premise to plot)


A local witch swears vengeance on the farm girl who accidentally kills her sister and steals her magic shoes.

It’s a start, but an angry witch bent on revenge is a weak obstacle. Sure, the witch can do all kinds of mean and nasty things, but this problem doesn’t really have anything to do with the goal of getting to the wizard. If the farm girl can avoid the witch, the problem is solved. If she can’t, then what happens? From a plotting standpoint, the witch is going to constantly try to stop the farm girl, so the scenes and situations will likely all be the same—and be a major snoozefest after the second or third scene that goes exactly the same.

When you’re devising your story conflict, look for problems that connect your conflicts with your goals and tie the premise together. For even stronger conflicts, look for things the protagonist did to cause their own trouble.


To appease the wizard who holds the key to her way home, a farm girl must steal the broom of the local witch whose sister she killed.

Now the goal is in direct conflict with the problem. The farm girl did something that hinders what she wants. She has to face that action in order to get what she wants. The witch’s death has meaning that carries over the course of the novel. It’s not just a problem that makes things physically harder, but a problem that must be faced to be resolved, both externally and internally (can you say guilt?).

But it’s still not there yet because nothing happens if she fails. Just having a dilemma isn’t enough if the outcome of that dilemma doesn’t matter to the character or the reader. That’s where your stakes come in.


To escape a world ruled by a manipulative wizard, a farm girl must steal the broom of the local witch–a witch who’s sworn vengeance against her for killing her sister and stealing her magic shoes.

Now we’ve got a plot to fit our premise and plenty of conflict and stakes to play with. The goal of the plot is to escape the magical world and the witch who wants the farm girl dead, and the wizard holds the key to that goal. To get it, the farm girl must put herself directly in the path of danger and that forces her to face the consequences of her actions. It’s all interconnected and shows the various aspects of what happens when a farm girl gets transported by tornado into a magical world.

Great ideas are only the first step to a great book. Spend a little extra time to ensure your idea has a defined goal to drive the story, and enough specific conflicts and stakes to keep the plot moving.

Do you have any premise-only ideas waiting for a plot?

Janice is also the founder of Fiction University, a site dedicated to helping writers improve their craft. Her popular Foundations of Fiction series includes Planning Your Novel: Ideas and Structure, a self-guided workshop for planning or revising a novel, the companion Planning Your Novel Workbook, Revising Your Novel: First Draft to Finished Draft, your step-by-step guide to revising a novel, and her Skill Builders Series, Understanding Show Don't Tell (And Really Getting It), and Understanding Conflict (And What It Really Means).
Website | Facebook | Twitter | Pinterest | Goodreads | Amazon | Barnes & Noble | iTunes | Indie Bound