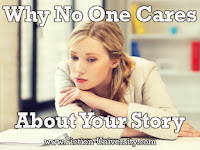 It’s one of the biggest dreads writers have—will people care about my story? We worry when we write it, we fret as we hand it off to our critique partners, we pace as our beta readers review it, and then we frantically check for reviews after we publish it.

If you ever find yourself in this situation—either as the writer or the critiquer of such a manuscript—here are four reasons readers commonly stop reading a novel.


Readers read to see the protagonist(s) deal with a situation the author has created for them, so wanting to read about that protagonist is critical. If there’s nothing compelling or intriguing about the main character, the story is just watching some random person do stuff.

Notice “like” doesn’t equal “likable.” Plenty of unlikable or bizarre characters hold reader attention and interest every year. They’re fascinating, or or interesting, or entertaining to follow. Likable characters don’t have to be good people, they just have to posses traits that draw readers in. Such as:

Readers love Jennifer Crusie’s heroines because they’re quirky and fun. Jack Reacher is beloved because he’s competent and dangerous. Miss Marple is charming and smart, while Sherlock Holmes is a raging jerk, but a genius. These characters have vastly different personalities, but they all share one thing—readers love reading about what they do.

2. They stopped caring about the problem.


The myth is that every story has to have a unique and mind-bending premise behind it, but that’s not true. The simplest stories can grab readers just as well as the wild over-the-top ones. A story problem readers care about is one that piques their interest and resonates with them on some level—emotionally, intellectually, or thematically.

Readers need to relate to and connect with the novel’s problem in some fashion. The more interesting the problem, the more it’ll hook readers all on its own. Story problems readers care about typically have:

Oddly enough, the stronger the character, the weaker the novel’s problem can be and still work. I believe this is why so many TV dramas can run for years and viewers still love them. It’s not about the basic story (we all know how that is going to play out), it’s about watching the interplay between the cast.

But if the characters are ho-hum and the novel’s problem isn’t compelling? Readers stop reading.


No matter how compelling the core problem of the story is, if nothing is happening on a scene-by-scene basis the reader will get bored. “Happening” doesn’t mean mega-action, though, it just means events that make the readers curious to see how it will unfold or resolve.

The sneaky trap in “interesting” is that it’s not always obvious when it’s boring. A well-written scene with plenty of action can be more yawn-worthy than a first-draft scene between two characters at a kitchen table—if readers have no interest in how that action scene plays out, but do care about what’s being said at that table.

In stories where nothing happens, there are:

Basically, it’s when there’s nothing the reader doesn’t already know in the scene. Things “happen” when readers learn something new by the end of a scene.


Since the story’s problem is part of the cover copy, readers typically start off hooked—otherwise they would not have decided to read that book. The trouble begins when the story fails to deliver on that original promise. Such as:

A lot of stalled stories occur for two common reasons: when the protagonist has no solid reason to solve the story’s problem but does it anyway, and when the entire story is to explain a cool premise or idea. The story doesn’t go anywhere because there is no actual story yet. There’s no protagonist with a problem to solve or else, so there’s no series of goals, conflicts, and stakes, and without those, there’s no plot.

(Here’s more on the problems with a premise novel)

As a writer, it’s disheartening to have a well-written novel that readers stop reading before the end. A bad novel we could understand, but when everything seems like it should be working and it’s not? That’s a frustrating place to be.

It helps to remember that readers need to care about the story and want to see it resolved to keep reading. It’s easy for us to want to describe the story and explain why it’s cool (we love it after all), and that’s the opposite of why readers read.

If you want readers to keep reading:

It sounds simple, but we all know it’s harder than it looks, otherwise we’d all have bestsellers. But it’s a solid guide for giving your story the best chance to hook readers and keep them to the end of the tale.

Are you hitting these four points in your current manuscript? Are you missing any?

If you're looking to improve your craft, check out one of my books on writing: