Day Twenty-Three: Idea to Novel Workshop: The Act One Problem 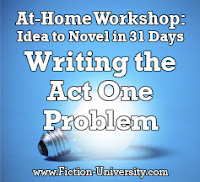 Welcome to Day Twenty-Three of Fiction University’s At-Home Workshop: Idea to Novel in 31 Days. For the rest of the month, we’ll focus on plot and the major turning points of a novel.

Today, it’s the end of act one and the act one problem.

The Act One Problem


After the novel opens, the protagonist encounters the inciting event, and he steps firmly on the path of the plot and eventually comes to the act one problem. The act one problem is the start of the beginning’s end. It’s when the protagonist discovers he has a big problem and needs to solve it or else. Typically, this is the result of what happened when he tried to deal with whatever problem he encountered in the inciting event.

Why the act one problem is important: It’s the transition to the middle of the novel and gives the protagonist something to do (a goal), and a choice to make. It’s the first major step once the protagonist is on the path to the core conflict. It’s also where the stakes are significantly raised for the first time.

Key Elements of the Act One Problem
The act one problem ends with the protagonist facing a decision and having to make a choice on how to proceed. The choice is the key moment here, and the protagonist must choose to act. Greater forces might have gotten him here, but he must decide to move forward on his own. Agreeing to act will force him out of his comfort zone and into an unfamiliar (and often emotionally scary) situation. But this step into the unknown is vital for his goals, both the external plot goal and his internal character arc goal. This choice is what officially launches the middle of the novel (more on that in the next section).

Subplots will play a role and help raise the stakes and deepen the conflicts. They’ll also help flesh out the beginning’s scenes and will likely be instrumental in causing the internal conflict at the act one problem, as well as trigger additional external conflicts. Aim for a good balance between core plots and subplots, and don’t let subplots take over the novel.

Here are things to consider to further develop your act one problem:

1. What is the protagonist’s goal and how does that lead to the core conflict?

2. What is motivating him to act?

3. What’s at stake if he fails or refuses to act?

4. Where does this scene take place?

7. How does this scene build off the inciting event?

8. What subplots might lead to this or cause additional trouble at this moment, both internal and external?

9. What choice does this problem present to the protagonist?

10. What conflicts affect this choice, both internally and externally?

11. How does this choice lead to the next goal?

EXERCISE: Describe the problem that ends with a choice, and how the protagonist got to that problem.


Be as detailed or as vague as you’d like. Consider how this scene builds off your beginning and how it might transition to the middle part of the novel. Include any helpful notes that come to you.

If you’re not sure how much to write, aim for one to three paragraphs that describe what the problem is, how the protagonist ended up here, what choice he has to make, and how the stakes escalate. He had X problem, but now he has Y problem and has to decide what to do, which leads to the next scene. Writing more is also acceptable if you want to continue with how the plot would unfold to the next major turning point.