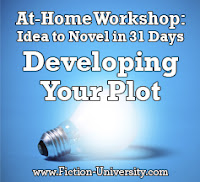 Welcome to Day Twenty of Fiction University’s At-Home Workshop: Idea to Novel in 31 Days. For the rest of the month, we’ll focus on plot and the major turning points of a novel.

Today, we’re taking a closer look at structure and the major turning points of the plot.

Understanding some basic story structure will make both the planning and the final plotting a lot easier. Novel structure formats offer plot turning points to aim for and provide a framework for your plot. Even if you’re a pantser, structure can help during revisions when you have a first draft done and want to make sure all your plot points are working.


A structure is like a rough map or the line drawings in a coloring book. How you overlay your story (color in the line drawings) is up to you, but the structure provides guides and boundaries to help keep you focused. Turning points like, “leave the ordinary world” are just a way of saying, “the protagonist does something new that starts the plot.” This can be a literal “enter a magic wardrobe and discover Narnia,” or “decide to wear a dress to school for the first time ever to catch the eye of the boy you like.”

Some writers worry that structure will create a formulaic novel. If you follow it exactly and take it literally, then yes, that could happen, but the strength of story structure is to let it guide you and remind you of the important plot elements of a novel. The moments are metaphorical or symbolic, and they suggest types of situations to aim for. And even when a novel does follow them exactly, if it’s done well, readers don’t even notice. The novel feels tightly plotted, not predictable.

The Three-Act Structure: The basic beginning, middle, and ending format we’re most familiar with in storytelling. Setup, rising action and stakes, resolution.

The Hero’s Journey: Joseph Campbell’s seventeen-step myth structure that outlines the journey a mythic figure (hero) undergoes on an adventure.

Michael Hauge’s Six-Stage Plot Structure: A variation of the Three-Act Structure that focuses on six critical elements of a plot. This one is also connected to the internal character arc structure.

In this workshop, I’m focusing on the Three-Act Structure, because it’s the most common story structure out there, and it’s easy to use for both beginning and experienced writers. The other formats also generally follow this structure, so it’s a good foundation to have.

People have broken the Three-Act Structure down in a myriad of ways, but it unfolds basically like this:

Act One: The Beginning (The Setup)


Act one is roughly the first 25 percent of the novel. It focuses on the protagonist living in her world and being introduced to the problems she needs to resolve. Something about her life is making her unhappy, but she’s not yet ready to do anything about it. She might not even be aware of the problem, but she feels unsatisfied in some way. She’s presented with an opportunity to change her life, and she either accepts the challenge or tries to avoid it and gets dragged into it anyway. By the end of the first act, she’s on the plot path that leads to the climax of the novel.

Act one is all about showing the protagonist’s world (her life, dreams, issues, etc., as well as the literal setting) and letting readers see the problems and flaws she’ll need to overcome to get what she ultimately wants. In essence, it’s where you say, “See how messed up this gal’s life is? This is what she has to fix before she can win.”


This is the introduction of the protagonist, the opening scene problem, the setting, the rules of the world, any critical traits or details readers need to know, etc. Something is happening that will draw readers in and allow them to get to know (and like) the protagonist.


This is when the opportunity to change or fix what’s wrong in the protagonist’s life presents itself. The protagonist is uncertain whether to take advantage of this opportunity, but eventually she does, either through her choice or from outside forces acting upon her.


This problem transitions to the middle of the novel and gives the protagonist something to do (a goal), and a choice to make. It’s the first major step once the protagonist is on the path to the core conflict. It’s also where the stakes are significantly raised for the first time.


Middles make up roughly 50 percent of a novel. The protagonist leaves what’s familiar to her and undergoes a series of challenges that will allow her to get what she wants. She struggles and fails repeatedly, learning the valuable lessons she’ll need in act three to defeat the antagonist.


The act two choice is a transitional moment, linking the beginning and the middle. The protagonist embraces whatever problem she’s confronted with, and accepts the opportunity it offers to resolve that problem. How she decides to deal with that problem establishes how the plot is going to unfold until the next step on the plot path.


The midpoint reversal occurs in the middle of the novel. Something unexpected happens and changes the worldview the protagonist has had all along. Her plan no longer works or is no longer viable, and things have to change. This choice and the creation of a new plan is what sends the plot into the second half of the middle (the 50 to 75 percent marks).


The act two disaster hits around the 75 percent mark of the novel. It’s the moment when it all goes wrong for the protagonist, and is often the result of trying to fix whatever went wrong at the midpoint. The big plan to save the day fails miserably and she’s worse off now than she’s been the entire novel. The stakes are raised yet again, and it all becomes too much to handle.


The ending is the last 25 percent of the novel. The protagonist decides to take the problem to the antagonist. She’ll use all the things she’s learned over the course of the novel to outwit and defeat that antagonist. They battle it out, and she’ll win (usually), then the plot wraps up and readers see the new world the protagonist lives in, and the new person she’s become after undergoing these experiences.


After digging deep down and finding the emotional strength to continue, the protagonist puts a new plan into action, using everything she’s learned over the course of the novel. She finally knows who she is and what she’s supposed to do, and she sets off to accomplish that.


The climax is the final showdown with the antagonist. The protagonist faces whomever or whatever has been making her life miserable for four hundred or so pages, and because she’s learned XYZ over the course of the novel, she wins (or loses spectacularly if that’s the type of novel you’re writing). This realization is also what was missing in her life all along. Whatever happens, the core conflict problem is resolved.


The wrap up is the happily ever after, or the burning apocalypse if that’s how you prefer it. What the protagonist is going to do now that she’s resolved her problem. In essence, the final scene says, “Yes, there was a point to this novel and here it is.” It gives readers a sense of closure and reassurance that the novel was worth their time.

What makes any plotting structure so valuable as a tool is that these elements can be anything you want them to be. The structure is just a frame to hang the story on, and knowing solid, proven turning points can help you decide what events need to happen when to get the most out of your own plot.

They also help you find holes in your plot and places where the stakes might need to be raised. If you notice the protagonist never fails, that’s a red flag that you might not have enough at stake or enough conflict driving the plot. Or you might not have a solid character arc that allows your protagonist to grow. It’s a map, a guide, but the scenes and problems encountered are all up to you.

EXERCISE: Write down the turning points of your novel.


These turning points provide starting and ending points for the plot. They can change as the novel develops, but they’re useful guides in the planning stage to get you started. Use them as tools, but don’t feel confined by them.

The Beginning
The Middle
The Ending
Those following along with the PYN book: Workshop Ten goes into more depth on the individual turning points of story structure, as well and the basics of scene and sequel structure. It also shares tips on plotting and story development.