Shifting Between Drafting and Editing 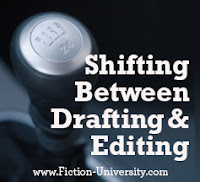 I recently had a conversation with a writer friend who was deep into a major revision on her novel. While a lot of the novel only needed editing, a large chunk of it had to be completely rewritten. She remarked that she’d been struggling with it, until she took off her “editing hat” and switched to her “drafting hat.” Then it became a lot easier.

Having just gone through a similar “the story works but the plot needed an overhaul” revision myself, I loved that image. We do look at our work differently when we’re drafting versus when we’re editing. We’re more forgiving, more open to ideas, more willing to write and see what happens.

When we draft, we’re creating new material from our imaginations. We’re exploring where an idea will go and having fun seeing what our characters will do next. We’re not trying to polish the text or fit any specific need and the possibilities are vast.

But when we edit, we’re looking for ways to make what we’ve already written better. We have the entire story in our heads and we’re thinking about how these changes affect the overall plot and how our tweaks will resolve whatever our critique partners told us needed fixing.

Writing a lot of new material with an eye toward editing is very likely going to make us second-guess our words and force those words to fit what we already have. But drafting allows us the freedom to write and worry about it later.

It’s a subtle shift in perspective, but I’ve found that how we approach writing matters a great deal. The smallest change in how a writer looks at a story, an idea, or even a technique or process, can determine the quality of the writing and how smoothly it goes. For example, you might have a great idea on how to rework a scene, character, or plot point, but you discard it because it would change four other things down the road and that’s too much. But you don’t realize that changing those four things would make the novel stronger overall, because it’s not about making this rough draft better, but writing a solid and compelling story in the first place.

I’ve edited novels that made me want to pull my hair out. No matter what I did, I couldn’t make them work. But as soon as I threw out what I’d planned and just let the story and characters guide me—regardless of what I’d originally intended—it worked. By switching from editing to drafting, I was able to stop forcing the story to go when I thought it needed to go and let it go where it needed to go. I realized I wasn’t done drafting, and that’s why it was giving me such a headache (same as my friend).

Fixing the existing text wasn’t what I’d needed to do to make the novel work, because that text wasn’t the right text. I needed to reevaluate how the story I wanted to tell unfolded and finish writing it before I could start revising.

If you’re unsure if you should be drafting or editing, try asking:

Is the story unfolding the way you want it to?


A “not ready to edit” manuscript has a lot of holes and entire sections or characters that need to be rewritten. Think of it more as a very rough draft you used to get your ideas down on paper to better understand the story. It’s written, but the next step is to see what was left out or what wasn’t necessary and keep writing.

A manuscript that’s ready to edit might need a lot of polishing, but the overall story, plot, and characters are sound.

(Here’s more on what a first draft should look like)

Are all the major turning points in the right places?


Sometimes we have the right ideas, but they aren’t in the right places. Maybe our inciting event happens way to late (or too early), or what ought to be the second act squeeze happens at the end of act one, or the climax shows up in the middle instead of the end. If moving the turning points changes the novel overall, odds are you’re still drafting. If shifting things around basically works and just requires some heavy editing to fix any narrative flow issues, you’re probably ready to edit.


In manuscripts that aren’t ready to edit, there’s a pretty good change the turning points are wrong or are focusing on the wrong aspect of the story or characters. They might be generally right, but not serving the story yet. For example, the big reveal is the wrong secret, or the catalyst to send the protagonist on the plot would never actually work the way it’s written. Your instincts say “something needs to happen here,” but you haven’t found the right something for this story yet.


Some novels work on a mechanical level—the plot is solid, the goals are moving the plot, and the events all lead smoothly from opening scene to climax—but the characters are just along for the ride, so nothing feels right. It might be a lack of motivations or stakes, or the wrong character is the protagonist, or even the wrong character arc is driving that character.

If it’s just a matter of realigning the character’s motivations to fit the goals, odds are you can fix that during the editing stage. But if the character is fundamentally wrong and they have no reason at all to drive this plot and tell this story, odds are you still have a lot of drafting work to do to figure out how they fit into this novel.

How much of the novel do you think you need to cut or rework?


In the end, this is the biggest factor—how much do you think you still need to write? If your instincts are telling you half the novel (or more) needs to go, then cut it and keep drafting. It’s okay if you’re not yet at the edit stage like you first thought. The first step in any edit is determining if you’re actually ready to edit or not. If the answer is “no,” then don’t sweat it. Finish the novel and check again when you’re done.

If you feel most of the manuscript is sound (even if it needs work), and you’re making mostly cosmetic changes, you’re probably ready to edit. You might change how a scene unfolds or even change a setting or two, but the story is basically the way you want it. Edit away and have fun.

(Here’s more on knowing when to revise what)

Although it can be discouraging to think you’re done with a manuscript and discover you’re not, editing a solid draft of a novel is a whole lot easier than editing a novel that’s not right yet. For most writers, you’ll actually save yourself a ton of time and frustration if you shift back and keep drafting until you’re happy with the manuscript before you start editing.

Have you ever had to shift back into drafting mode during a revision? How much rewriting do you do on your manuscripts?