Birth of a Book: The Idea Stage: Turning Inspiration into a Story 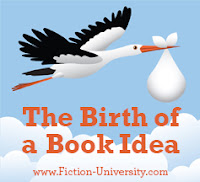 The last time I opened the site up to questions, a reader asked about more information on the early stages of writing a book. I thought it was a great idea, and as I’m currently in this stage, it seemed like a good time to launch this informal series. Since every writer approaches a novel differently, I’m going to borrow an idea from contributor Jami Gold’s last series and discuss my process and the reasons behind it in the hopes that analyzing the process will help others find or clarify their own processes. Hopefully, it’ll also provide some things to consider and some direction if you’re not sure what to do with your ideas.

Sometimes I know exactly what book I want to work on next, but this time, I haven’t quite pinned down the one I want to write. Several ideas are flittering around in my head and my goal this week is to explore all of them and see which story feels ready to write.

A note about ideas: I keep an idea file, and some of the ideas I’m just now developing have been sitting in that file for years. It’s important to remember that a great idea isn’t always ready to be written—the idea for my debut novel sat ignored for almost ten years before I pulled it out again and found the missing piece that turned it from a cool idea to my first novel sale. Don’t underestimate ideas you’ve already had. Some ideas need time to simmer.

I have a four-step process I go through before I get to any actual writing. First, I need that spark of inspiration to get the idea, then I brainstorm the idea, clarify the idea, and finally test the idea. If the idea proves it can carry a novel and I still want to write it, I do. I’ll go into more detail on all of these over the next month, but today, let’s look at how that spark of inspiration becomes an idea.

Step One: The Inspirational Spark


I have plenty of “ideas” that are little more than sparks of inspiration that aren’t defined enough to write a novel. I might have a setting I love, but if I have zero conflict or characters, there’s no way I can write it. I need some sense of story direction and a hint of conflict.

For example, my debut novel, The Shifter, began with the idea of a person who accidentally healed others from skin-to-skin contact. But the novel wasn’t ready to write until the idea of pain merchants and buying and selling pain came to me.

I’m currently playing with four ideas, so here’s how they all began, why I feel they’re ideas worth exploring, and what the next step in the process will focus on:

Novel A: The Middle Grade Fantasy


The inspirational spark: This idea began with a title, when my husband misread another title while book shopping and thought it sounded cool. I thought so too—so much so that it sparked an entire plotline in my head from just three words. That plot was very rough, but I could see the general sense of the story unfolding from the moment I heard the title.

Why it was worth exploring: An idea that makes a person see the whole story from the title is what that elusive term “high concept” is all about. This is the type of idea that frequently gets agents’, editors’, and readers’ attention, and they’re usually the most marketable of ideas. It’s also an idea that makes me want to write it, and excitement over an idea shows in the writing. We tend to write better books about ideas we feel passionate about. Personal excitement + high concept = a novel that will be both fun to write, and stand a good chance of selling.

What to do with it next: The plot came to me first, but there’s a lot of world building involved in this story, so my focus has been on developing that world and fleshing out the concept behind the title. This is what my Step Two Brainstorming will focus on.

(Here's more on knowing if your idea is worth writing)

Novel B: The Young Adult Contemporary


The inspirational spark: The premise for Novel B popped into my head during lunch at Panda Express. Again, there was a clarity of story and plot, and even though I had no idea who the protagonist was or what she was going to do in a scene-by-scene basis, I knew she was a girl who was going to upend her world on purpose and act in a very specific way after getting her heart broken. The first page even came to me as I was drifting off to sleep and made me get up and write it right then and there.

Why it’s worth exploring: I’ve had two high concept ideas my entire life and Novels A and B are it. They came to me a year apart (at least), but I hadn’t had a chance to get to them before this. This idea came with a much clearer plot because the hook itself will drive every scene. I strongly suspect this will be an easy book to write based on the concept alone. When I have a hook this strong and clear, odds are I’ll wind up with an equally strong novel.

What to do with it next: My Step Two Brainstorming will shift over to the characters and who these people are. Creating the characters and understanding their personalities will determine how the great hooks are going to unfold, so I really need to know these people—especially my protagonist. The character-driving internal arc will be key to this particular idea, so I’m going to do more pre-story character development than I usually do.


With this idea, I’m returning to the drawing board for a total rewrite.

The inspirational spark: This idea was a “what if…” premise that sent me world building and looking at a dysfunctional relationship between siblings. Just like with The Shifter, the world building came first. I knew the character arcs and core conflict, but not how those two things would be illustrated by the plot.

Why it’s worth exploring: This is a personal book for me, exploring bigotry and how we discriminate against people, but in a science fiction setting that makes the concept more approachable. It’s an idea I know isn’t as high concept or marketable as the other two, but I find the world and situation fascinating, and I want to tell this girl’s story. This is a book I need to write and get right, even if I never sell it.

What to do with it next: This idea has been around for a few years, and a lot of the world building is already done. I’ve even written two previous drafts of it that didn’t work the way I’d hoped, but I still believe in it. My Step Two Brainstorming this time around is to get personal, turning that broad premise into something compelling for the protagonist and the characters. Concepts are great, but just exploring a cool concept isn’t enough without characters and a deeper story readers care about—especially in YA. That was what was missing in the earlier drafts, but I think I needed to write them first to understand the larger aspects of this story.

(Here's more on writing the book of your heart)


The inspirational spark: This is the sequel to a book I just sent to my agent. This series was another “what if…” premise posed by my husband (I swear I could rent him out as a muse), and I just loved the twist of taking a well-known myth and turning it on its ear. Part of the idea for book two came from finding another myth to play with, but like my middle grade fantasy, the title of this one really directed the plot. The myth + title happened pretty quickly, as they’re so well tied together.

Why it’s worth exploring: Writing the first book was a ton of fun, and I love these characters, the world, and the concept behind the series. After a day or two of brainstorming with my husband on potential future books, we came up with eight rough ideas—so clearly this series has legs—and the beta reader feedback has been outstanding. Readers are already asking for book two. I also think it’s a strong indie novel if no traditional publisher picks it up, so from a career perspective, it’s a good move. I can release book two fairly quickly and capitalize on any success book one might get.

What to do with it next: Since the series is already established, the Step Two Brainstorming will be all about the plot and where the series goes next. In many ways, this will be the easiest of my ideas to develop, because the hard work is already done (and why it’s so tempting for writers to write a sequel instead of starting something new).

Ideas come in different ways, and they each have reasons that grab us and make us want to write them. At this point in my career, I evaluate an idea on how easy and fun the book will be to write, and weigh it against its marketability. “Can I sell this?” isn’t the determining factor, but if I have two ideas I love equally and one is clearly more marketable, I’ll go with that idea. To me, it’s a smarter career move.

Every writer writes for different reasons, so if you choose books based on passion and interest, write where your heart takes you. Don’t stress over the business end if you find that hurts your writing, and write a novel with an idea you feel so-so about just because it might sell. Write the book you care about, starting with an idea that grabs you and makes you want to write it.

Next week, I'll let you know which idea I'm going with, and continue with the brainstorming process.

How does inspiration strike you? What’s your idea process like?