6 Ways Netflix Can Make You a Better Writer 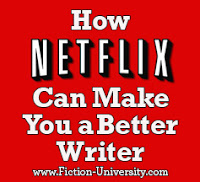 It might seem odd to watch TV to improve your writing, but Netflix* is a fantastic tool for writers. Not only does it give us a way to escape when we need a break, but it allows us to see complex stories unfold in a way that easy to study them. Binge watching packs a lot of storytelling examples into a weekend.

Even better, since much of the original programing has only ten to twelve episodes a season, they’re written more like a novel than a TV show. Netflix expects viewers to binge, so a series often plays out as one long movie, not a series of loosely connected episodes. And for most people, it’s less time consuming to watch ten episodes than to read ten novels—and much easier to return to a scene you want to study further, or pause the show to take notes.

Of course, writing for TV is different from writing a novel, so you wouldn’t want to follow the exact format or structure, but it’s close enough to learn a few things to improve your own storytelling.

Studying a story on Netflix allows you to:

1. Spot tropes and overdone cliches in your given genre

Watch a season of any genre of show. Sitcoms, dramas, procedurals, comedies—they all have their tropes and cliches. The bad ones usually use them right away, but the better ones frequently use them in the third or fourth season after they run out of the really good ideas (or the original writers leave).

This also holds true for movies. Spend a weekend binging on romantic comedies or action thrillers, and you’ll see the similarities, both good and bad. Even if all you do is watch trailers all afternoon, you’ll see what’s common to that genre.

2. Learn how to effectively weave plots and subplots

The short-season shows are great for seeing how a story unfolds in all its layered complexity. Each episode is almost a mini-arc by itself, with subplots within each arc that span single episodes to entire seasons. For many shows, the episode turning points fall similarly to the traditional story structure we use in our novels.

But the subplots are where binge watching really pays off. Since the main plot (the core conflict if you will) needs to cover at least the season, creators have the fill the show with other things to hold viewers’ attention (like a subplot). A bad or mishandled subplot sticks out much worse in a TV show than a novel, because it’s compacted over a shorter time frame. A good subplot slips in and out of the story and you marvel at how well it all ties together. You can also see when, where, and how a subplot is woven into the main storyline, and how much “page time” it gets versus the main plot.

Watching a show on a weekly basis gives you a week to forget the minute details of that show. Watching ten episodes in a row makes it clear how a character changes (or not) in that show. Even with a regular syndicated sitcom, the differences between the characters in season one and the final season are usually noticeable. In a drama, they can seem like different people if the arc is strong enough.

With a well-developed character arc, you can usually spot the moments that created that growth. Some are larger scenes that also advanced the plot, others are decisions that had unexpected consequence. For the really good arcs, tiny moments turn out to be major events later in the story.

Some shows (and movies) have very distinct voices, but in the overall sound of the show and the individual characters. If you can’t remember the names of half the characters on a show, there’s a good chance that character wasn’t unique enough to be worth remembering. Those you do remember, likely had unique voices and personalities.

5. Learn how to create interesting characters

Some of the most memorable characters are on TV, and there’s something about watching a live person versus reading about one that often makes them feel more real. It’s the mannerisms and ticks, the small things that people do that set them apart from others, and those come through on the screen more easily than they do on a page—because the actors can’t help but do the unconscious things people do (and the good actors do this consciously).

6. Learn how to create and sustain a series

Keeping an idea going year after year after year is no small feat, and TV writers get a ton of practice at this. If you’re developing your own series idea, watch some of the long-running series and pay attention to where and how those larger story arcs unfold. Many of them (especially the genre shows) have a per-season conflict just like a novel, with a series-arcing conflict tying it all together. You can get a good sense of how many subplots might be needed, or how slowly a character arc needs to unfold, or when to reveal important information.

(Here’s more on writing a series)

Storytelling at its core is the same no matter what medium you use to tell that story. If it’s easier for you to watch away a weekend and pick up tips, Netflix offers many great opportunities to learn.

For those looking for some well-written shows, try any of these:
There are so many more to choose (and learn) from, so have fun exploring your options.

What TV shows or movies have helped your writing?

*I use Netflix here, but any of the streaming services work just as well.