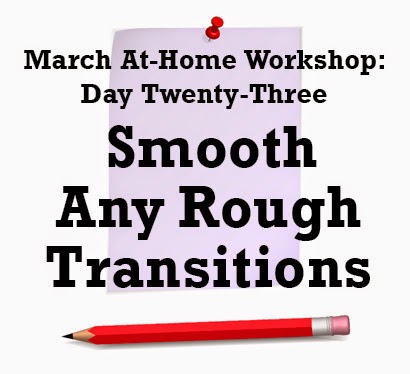 Welcome to Day Twenty-Three of Fiction University’s Month-Long Revision Workshop. Up until now, we’ve been adding and tweaking our stories, focusing more on getting the missing information in, and cutting the unnecessary information out. Odds are we’ve gotten some scenes a little messy, but the overall novel is working from a plot, character, and scene to scene standpoint. Now is the time to tighten things back up.

Now that our characters are talking and thinking clearly, it’s time to make sure our scenes and transitions are moving through the novel just as smoothly.

Today, we’ll look at our transitions and see if there are any rough or jarring areas between scenes and ideas.

1. Check the Chapter and Scene Transitions


How we move from line to line, paragraph to paragraph, scene to scene, and chapter to chapter leads readers though our novels. The smoother those transitions, the easier we can draw readers in, while jarring jumps, awkward shifts, and missing information can all knock a reader right out of the story.

Chapter to chapter transitions: Make sure every chapter ends with something compelling readers to turn the page. It might be a cliffhanger, a secret revealed, the revelation that there is a secret, a foreboding piece of dialogue or image, a major decision, etc. Use your imagination, but make it something to make readers want to know what happens next. Breaking a chapter (or scene) to move the story to another location, time, or character is also an effective tool. Things to ask:

The opening of the next chapter is just as important (actually more so since this is where you can lose readers if you don't make them happy). This is what answers—or begins the journey to the answer—the question you posed at the end of the previous chapter. Things to ask:

Scene to scene transitions: Any time we break a scene we give readers an opportunity to set the book down, since scene breaks are natural stopping points. We might even feel the urge to create good stopping points, such as having a character go to bed or set off on a trip, something that tells the reader, “yeah, we'll pick it up here tomorrow, 'kay?" But without something to entice readers to read on, why would they come back tomorrow?

Often, scene breaks are softer than chapter breaks, relying on the building sense of doom to carry readers forward. A decision has been made, the stakes have been stated, and now it’s time to see how it works out. Chances are, you've got nice tension building, so start out the next scene in a way that uses that tension and keeps it going. Things to ask:

Checking the actual transitions is a good way to spot (and fix) the problem when something isn't working but you're not sure why. If it feels like all the right pieces are there (and they often are), but the scene drags, feels clunky, or just isn't grabbing the attention it should, try shifting things around so they lead readers where you want them to go.

How did we get here? The location or time changes without clues to alert readers they've moved. This can also be confusing if the story jumps ahead in time, but it isn’t clear how much time has passed. Try informing readers about a shift, either at the end of one scene or the beginning of another.

Where did that come from? A shift in ideas comes out of the blue. This often happens when the character needs to realize or remember something for plot reasons, but there's nothing in the text to trigger that realization. Try adding that trigger and showing what makes the character suddenly think that.

Get there already Too much time is spent showing the transition. Travel is a common problem area for this type, with the character moving from one place to another, often describing everything she sees along the way. In fact, this is sometimes the only reason for the travel—an excuse to describe the setting. Try breaking the scene and moving to when the next interesting event happens.

2. Check for Repetition of Transitions


Scene beginnings and endings often have similar tones or phrasing, so it’s not unusual to see the same basic style repeated throughout our first drafts. Write down the first and last lines or paragraphs of every scene and look for similarities. If there are multiple scenes starting and ending in the same way, rewrite to vary.

Common problems: The first line of the scene begins like, “As I walked into…” “I stood with…” “We waited while…” and the like. The final line is a statement of intent, such as “I had to find out why they wanted me dead,” or “character goes unconscious in some way.”

After today’s session, we should have a novel with a solid narrative flow that moves smoothly from one scene to the next, dragging readers along with it.

This ends Stage Four, and we ought to have a novel that’s in pretty good shape. Everything is in the right place, it's telling the story as intended, and unfolding the way we want it to. Next, we’ll start work on polishing our drafts and cleaning up the text itself.

New to the At-Home Workshop? Find the current list of revision steps and earlier prep work on the introductory page.