A Surefire Way to Add Conflict to Your Story 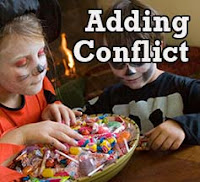 A lack of conflict is one of the main reasons books get rejected from agents, editors, and yes, even readers. It can manifest itself in many different ways, from no obstacles keeping the protagonist from a goal to scenes that feel as though nothing is going on, but it all ends with the same basic complaint—readers don’t care enough about the story to read it.

One of the pitfalls of conflict is that it’s often misunderstood. When we think “conflict” we tend to think “fighting” or “aggression” or “enemy,” but that’s only one aspect of it (and the least interesting one at that.) The simplest way to look at it is as the struggle for what we want over what’s best for us.

Every year, millions of kids go trick or treating and bring home candy. What they want is to eat it in huge quantities. What’s best for them is to eat a few pieces at a time. The conflict is, “I want to eat a pound of candy, but it will make me sick.” And thus, vast sums of kids do what they want and get sick every year. Those who learn not to eat too much the first time get to enjoy the candy for months. Those who don’t, get sick a few times and the candy is taken away.

If this was a scene it would look like:

The goal: To eat lots of candy.

The stakes: Gut-wrenching pain and nausea, loss of treasured candy.

Each kid has to face the hard choice of satisfying that urge to gorge or risk sickness and loss.

Great story conflict is a character doing what they know is going to have unpleasant consequences because they want to do it. It’s the choice to act in spite of the risks that makes it interesting.

To add conflict, let your character’s want things that are bad for them (even if that “bad” thing ultimately gets them what’s good for them in the end).


Look at the conflict in your current manuscript:

State the goal: What does your protagonist want?

Your protagonist will want many things throughout the course of the novel. Some of them will be small goals to drive a scene, others will be the larger core conflict goals that are the reason the book exists. No matter what the scope of that problem is, the structure is the same—protagonist has a goal and works to resolve that goal.

(Here’s more on developing the goals in your scenes)

State the stakes: What happens to your protagonist personally if they don’t get that want?

It’s easy in many stories to say “they die,” but that’s actually a lousy stake. It won’t happen 99.9% of the time and readers know this. So whatever the consequence is should be like getting sick from candy (only on a scale to match your story). It’s personal, it’s a direct result of what the characters do, and it’s something they don’t want to have happen to them because it’s horrible, or it might cause worse problems (like losing the candy).

(Here’s more on why stakes have to have consequences)

State the conflict: What does your protagonist want that is “bad” for them?

“Bad” is subjective. It’s “bad” because it will cause pain before it brings happiness (or as in our candy example, it will cause brief happiness before pain and thus risk ongoing happiness). If the want was truly bad for the protagonist, odds are it wouldn’t be the point of the novel. But to get that ultimate want (be it to escape a situation, prevent an injustice, find love, or be happy) there will be hard choices to make and prices to pay. If it was easy and cost nothing, it wouldn’t be a story-worthy problem.

If your protagonist doesn’t want anything that’s bad for them (aside from death), that’s a big red flag that you have low or missing conflict in the scene. Characters need to face tough choices, make sacrifices, and grow through pain by the end of the novel. The conflict comes from the struggle get what they want, even though it’s hard (if they ration the candy they can enjoy it for months).

(Here’s more on adding conflict to your scenes)

Look for the story equivalent of Halloween candy in your scenes and let your characters make the hard choice to eat or not to eat.

Do you have enough conflict in your story?