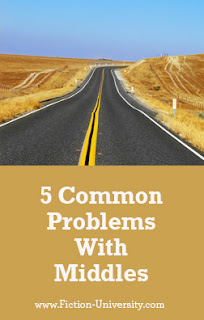 The only thing tougher than a middle is an ending. Except for the maybe beginning.


For a long, long time in my early writing days, middles were the bane of my existence. I could start a story no problem, but once I got past the beginning, I narratively drove into the deep weeds. I don’t think there was a problem I didn’t run smack into when it came to middles--which is why I spent so much time figuring out how to make them work.

What makes middles so tough is that middles are where most of the plot happens. The protagonist tries and fails to resolve the story problem, the antagonist makes things harder and harder, the character arc unfolds, and all this stuff has to support whatever the beginning set up.

If a middle isn’t working, it’s usually due to the story slows down in some way, and loses sight of what the plot was trying to accomplish.

Let’s look at five common problems with the middle:


Since the middle is half the novel, it’s common for plots to drag and wander without direction. Subplots bloom as we flesh out a middle and send the characters running around, killing time. These subplots might add words, but they’re not adding any value to the story. After a while, we forget what we were trying to do in the first place.

This is usually due to not enough goals to drive the plot to the climax, and is frequently solved by adding a major turning point in the middle of the book (the midpoint reversal). Giving the protagonist (and you) something to work toward gives the middle direction, and dealing with the midpoint gives the middle somewhere to go to lead you out of it.

(Here’s more on the midpoint reversal)


While trying to fill all that space, we write too many similar scenes. Multiple chase scenes, several attempts to solve the same problem, repeated interactions between characters, and way too many conversations around a kitchen table. Repetitive scenes can indicate a middle that’s light on plot, or one that needs to vary how the protagonist accomplishes the goals so the scenes feel different.

Look at your scenes and either combine or eliminate those that feel too similar, or find ways to change how that similar scene unfolds.


Often, a middle stalls because it feels like it’s just going through the motions to get to the ending. Two big reasons for this:

No payoffs: In an effort to pile on the problems, sometimes we forget to reward both the characters, and the readers, for sticking with the plot. Constant failure can make a middle feel like it’s not going anywhere, but a few victories (even if they’re small), can make the plot feel like it’s moving toward the end.

No surprises: We set up the beginning, we know the ending, and the middle is all about getting there. But it unfolds exactly as readers expect without any surprises, twists, or discoveries and just feels meh. Add in a little unpredictability and make readers want to stick around.

(Here are more ways to fix a stalled scene)


Now that readers are hooked, we dump all the backstory we'd held back from the beginning into the middle. We explain, we flashback, we infodump—and the pace slows to a crawl.

Be ruthless and get rid of all that extra (an unnecessary) information. If there’s anything you feel has to stay, find ways to make it part of the narrative and put it to work for the story.


If the middle feels like it’s not going anywhere, check to see how your internal conflict and character arc is affecting your external plot arc. If these two aren’t causing trouble for each other, that’s a likely trouble spot. You’ll usually see that in:

Stagnant stakes: Bad things happen all through the middle, but the stakes never escalate. The protagonist faces exactly the same danger by the end of the middle as she did when she started it. Keep escalating the stakes, or at least have the protagonist learn enough new things so the existing stakes mean more.

No character arc movement: The protagonist solves problem after problem, but nothing is learned by it, and she’s making the same mistakes she made at the beginning of the novel. Let the protagonist learn a few lessons and suffer a few failures.

No doubt about it, middles are rough and notorious for bogging down. Don’t worry if you find yourself hip deep in weeds. Just plant a few guideposts to get you out, and follow the trail to freedom.

Do you ever have trouble with middles?