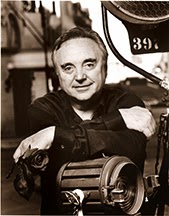 Titles are one of those things that either hit me before the book is written (sometimes it's what sparks the idea) or something I struggle with long after the novel is done. I've heard similar stories from plenty of writers, so I know I'm not alone in this. If you're one of those writers who sometimes has trouble coming up with a title, acclaimed author Warren Adler is in the lecture hall today to share a few tips on how to find the perfect title.

Author, playwright, poet, and essayist Warren Adler is best known for The War of the Roses, his masterpiece fictionalization of a macabre divorce turned into the Golden Globe and BAFTA nominated dark comedy hit starring Michael Douglas, Kathleen Turner and Danny DeVito. In addition to the success of the stage adaptation of his iconic novel on the perils of divorce, Adler has optioned and sold film rights to more than a dozen of his novels and short stories to Hollywood and major television networks. Random Hearts (starring Harrison Ford and Kristen Scott Thomas), The Sunset Gang (starring Jerry Stiller, Uta Hagen, Harold Gould and Doris Roberts), Private Lies, and Trans-Siberian Express are only a few titles that have forever left Adler's mark on contemporary American authorship from page to stage to screen. Warren Adler novels in recent development are: The War of the Roses - The Children, a feature film adaptation of the sequel to Adler's iconic divorce story, Capitol Crimes (Sennett Entertainment), a television series based on his Fiona Fitzgerald mystery series, Target Churchill, a historical thriller, and Mourning Glory, a dark comedy about a recently unemployed single mother seeking a rich husband by attending the funerals of wealthy widowers and posing as a friend of the deceased.

Take it away Warren...

Like every author on the planet, I've spent endless hours mulling over creating titles for my work. One strives, of course, to be both memorable and honestly descriptive of the content.

There are also marketing aspects to be considered. The marquee value cannot be neglected since the book, especially fiction, must compete in the market place and be "discoverable" to the searching eye of the browser and the impulsive book buyer who scans bookshelves of those bookstores still remaining and interminable book cover images that clutter the e-reader "shelves."

Another wild aspiration that motivates the author is the possibility of a movie production of their novel and the limitations of the actual movie marquee. Anything more than a four-word title could be a dream killer. Imagine any great movie or TV adaptation based on a novel where the title of the novel is changed. I have been lucky in that regard with three of my works The War of the Roses, Random Hearts and The Sunset Gang.

The title's suggestion to a cover artist was, and perhaps still is, an aspect that had to be taken into account. The book cover design and illustration has always been an integral part of the marketing process and many fine prize winning designs have been an essential marketing tool for books in both fiction and non-fiction categories.

For books in categories such as romance, science fiction, mysteries, fantasy, zombie and vampire stories, young adult and children's books and all their sub-categories, the titles and covers must reflect the specific genre to clearly designate its content.

But for the author of mainstream fiction whose story line is not in any genre category, he or she must face the agony of choice. Many famous authors chose to name their books after a main character, and one can point to many successes such as David Copperfield, Oliver Twist, Jane Eyre, Anna Karenina, Daniel Deronda, Nana, Mrs. Dalloway, Lolita, Mrs. Palfreyat the Claremont, Rebecca, Tom Jones, Clarissa, Robinson Crusoe and the most enduring of all, Don Quixote.

Some authors have chosen place names, countries, houses, streets, neighborhoods, destinations, bars, modes of transportation and myriad other categories as titles, too numerous to mention; Wuthering Heights and Tales of the South Pacific are typical.

Many of these, obviously, are classic novels that have stood the test of time but there are many character named titles that have passed on to obscurity.

Then there are the titles that are lifted from lines of poetry that the author believes are an apt choice to illustrate a theme of the novel, some of recent vintage like The Lovely Bones. Among the better known are A Handful of Dust, Of Mice and Men, Far From the Madding Crowd, Remembrance of Things Past, Endless Night and many others.

One title that always intrigued me was Catcher in the Rye, which takes its inspiration from Robert Burns, the famous Scottish poet whose "Comin' Thro' The Rye" was a poem with obvious sexual overtones, a subject much on the mind of the main character in the book. Another is To Kill A Mockingbird, which takes its title from a snippet of dialogue from its main character declaring that to kill a mockingbird is a sin. That title truly encapsulates the theme of that novel.

Believe me, I have had many sleepless nights trying to come up with titles that accurately nailed the content of my work. I've taken them from snippets of poetry and quotations from Shakespeare whose work is a gold mine of fantastic possibilities. Indeed, I found the title of my latest work, The Serpent's Bite, in that famous quote by Lear, "How sharper than a serpent's tooth it is to have a thankless child!" It hits the mark about the content of this novel with deadly accuracy.

I've always admired the titles of Hemingway, masterpieces of accuracy, nuance and subtlety. Few are better than A Farewell to Arms and For Whom The Bells Toll, and an all-time favorite of mine is Gone With the Wind, which is beautifully said and chillingly accurate. Another all-time favorite of mine is The Red and the Black, by Stendahl, subtly delineating the central focus of the main character's ambitions, the red of the Army and the black of the clergy.

Thomas Hardy was a master of titles: Jude the Obscure and The Return of the Native to mention just two of many. Some wonderful titles stick in my craw, not because they are not brilliant but, for some reason, I could never fully master their content. They are One Hundred Years of Solitude and Under the Volcano.

It has always been a source of great curiosity to me to understand the psychology of "titling."

Do titles really help in making reading choices or are they merely identifying pointers? I'd like to hear what you think.

Jack Cooper is an unhappy man, mind, body, and spirit. In the blink of an eye he has lost his longstanding job to the economy, his mother to illness, and his wife to her secret lover. Beaten, broken, and crippled by tragedy, he withdraws into total isolation, narrowing his life down to the simplest of routines in order to block out the pain. His day begins with a strenuous workout at the Bethesda Health Club, his personal oasis where his mind and body can be free, and ends in his tiny apartment, where he escapes from reality with his books until he can lose himself in sleep. Nothing more, nothing less. That is, until he meets the enigmatic Mike Parrish.

Stolen from the hospital as a newborn and passed around from household to household, Parrish has no official identification. To the government and the world at large, he does not exist. He is an anonymous drifter, but also the first person who breaks through Cooper's emotional confinement. Cooper finds solace in his friendship with Parrish, a man who understands his plight and is sympathetic to his pain.

But then Parrish suddenly disappears, leaving Cooper to search for a virtually invisible man. As he looks for clues as intangible as ghosts, and chases leads as fleeting as shadows, his search leads him back to the one place he called his refuge: the Bethesda Health Club.

How much can be taken from a man before he has nothing to lose?

Special promotion: Get Treadmill on Kindle now for only $2.99