5 Ways to Hook Your Readers 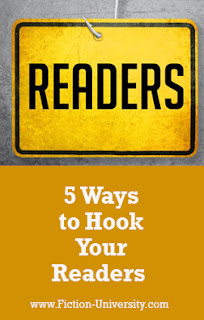 This week's Refresher Friday takes an updated look at ways to hook your readers and keep them reading. Enjoy!

"You need a strong hook" is advice you hear a lot of in writing, and it's good advice. A strong hook pulls readers into the story and makes them want to read on.

A hook is something that captures reader attention and piques interest in the novel. It can also be the gotcha or twist that makes the novel compelling and fresh, intriguing readers even further. It’s the “ooooh” factor that probably got you excited about the idea in the first place. It might be a plot point, a character goal, or a conflict. It could even be the theme.

In harsh terms, the hook is why a reader (or agent) should care about your book and not pick up someone else’s. Readers choose a novel because one book will stand out and sound more appealing than another—one “hooks” more than the other.

However, it’s important to remember that a hook doesn’t mean an original or unique idea. It’s easy for writers to get caught up in thinking that they have to be unique to be published, and throw out great ideas for not being different enough. Just being different doesn’t mean you’ll have a good hook.

What makes a hook strong is the type of reaction it gets from a potential reader. A novel about sentient snails might be unique, but it probably doesn’t make you want to read it. But The Wizard of Oz told from the Wicked Witch’s point of view gives you a new perspective on something you might already love—and probably something you’ve always wanted to know yourself.

Strong hooks can be unique, but they can also be fresh takes on a much-loved idea. Look at how many times Romeo and Juliet has been retold. It's the same core story, but a new hook is created each time by changing something and approaching it in a fresh way. West Side Story set it to music and used gangs to represent the feuding houses. Warm Bodies used a zombie apocalypse to create the two warring factions. But at the core, these stories are still Romeo and Juliet.

While hooks are important to a novel, don’t feel pressured into feeling you must be unique and compelling. That’s a lot to ask from a writer. When in doubt, go for the most compelling concept.


There’s no formula for a good hook, but it typically presents an unexpected combination of things or a surprising question or image.
Hooks are most often found within the protagonist, the core conflict, the theme, the setting, or the concept, but they can be anything that piques interest and shows off the compelling aspect of your novel. They might be phrased as a question, or just a statement about a situation or a character.

(Here's more on What Writers Need to Know About Hooks)

(Here's more on 10 Traits of a Great Protagonist)

The core conflict of the novel revolves around a special or unexpected event or situation. The problem itself draws readers in, and they want to see how this issue will unfold.
What the core conflict hook offers is a situation that has to be seen to completion. Readers need to know how this will turn out, what will happen, and what the results will be.

The theme explores an idea in a compelling way. Often these novels are more literary in nature, but a solid theme hook can also drive a more commercial novel. The hook poses a philosophical question the reader finds intriguing and then explores it.
What the theme hook offers is a chance to look at a deeper concept, explore an idea, or be confronted with a philosophy you might not agree with. It makes you think or reflect in some way that lingers even after the book is done.

(Here's more on Theme Me Up: How to Develop Your Novel's Theme)

A setting hook offers readers a world (in the most general terms) that intrigues them and makes them want to explore it. It’s unusual and a place readers might want to visit regardless of what kind of novel is set there. It usually triggers a sense of adventure or what kinds of adventures might occur there.
What a setting hook offers is a world you don't want to leave, or one you want to explore. It's a cool place to be even if there was no plot or story going on.

(Here's more on 10 Questions to Ask When Choosing a Setting)

(Here's more on An Easy Tip for Developing Story Ideas)

Wherever the hook comes from, it’s the thing that makes people’s eyes light up when you mention it.

What are some of your favorite hooks?