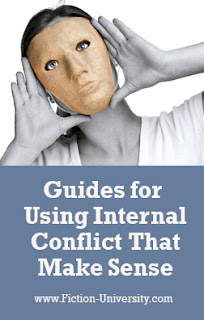 Here’s an easy way to develop character arcs in your novel.

Years ago, I sat in on an amazing workshop at an RWA conference. Michael Hague's Using Inner Conflict to Create Powerful Love Stories was one of those workshops that discussed a topic I already knew, but he presented it in such a way that I saw a super easy way to apply inner journeys to my stories (something this plot-focused gal can always use).

While the workshop was about romance specifically, the pieces of Hague’s inner conflict template work for any character journey. He calls the overall arc the “journey from living in fear to living courageously.”

To put it in more familiar terms—the character arc: the growth the protagonist undergoes over the course of the story.

A character who grows, is a character readers can root for.

Yet we don’t always give them a chance to grow, even when know what that growth should be. Selfish to giving, shy to outgoing, distrustful to trusting. We keep the general growth theme but fail to make it part of the story, or let it help drive the plot. Often, it’s because we don’t know how. Does it need its own subplot? Is it something that drives the story at all or is it just emotional internalization? We’re lost, so we don’t take advantage of the character arc.

Longing or Need: The thing the character longs for or needs in the story.

Hague describes the longing as the desire the character is aware of, wishes for, and could change if they actually acted, but they never do.

The need is the thing that will make their life better, but they don’t know they need it yet. They can’t identify what’s “missing,” though they know something is and that lack is making them unhappy.

If this doesn’t say “inner goal” I don’t know what does. Your protagonist will have a clear exterior goal (plot), but their dream, their wish, the thing that will save them if they only realized it, is the internal goal. The longing or the need.

For example:
You can see how this leads to plot.
Each internal need suggests the type of external goal that might help fill that need.

(Here’s more on Woe Is Me: Strengthening Character Goals)

Wound: A past wound or hurt that is a current unhealed source of pain.

Can you say backstory? Something bad happened in the protagonist’s past that affected them so profoundly it shaped them as a person, and still influences their decisions and actions years later.

The wound might be some deep dark secret, or it might be how the character grew up. It changed them, and had this not happened, they would have become a different person. This is often the thing you want to explain at the start of a story so the reader “gets it.” (But don’t do it). 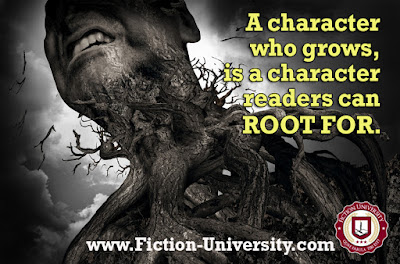 Belief: What the character believes due to the wound. How it shapes their worldview.

Now we’re talking serious point of view filters. Whatever happened to your protagonist, the thing that shaped them, was so profound it created an entire belief system for them.

This is the filter through which the protagonist sees the world. Their past experience (the wound) colors how they view their current life. They’ll make decisions based on or influenced by this belief.

Hague used Shrek as an example. Shrek grew up as “a big scary ogre” and everyone ran away. In his mind (his belief), he’s nothing but a big scary ogre and unworthy of love. He expects people to run from him. He expects people to hate him for who he is (or thinks he is). He learned early on that people run from him, and this has shaped who he is and how he interacts with the people and world around him.

But as we learn later in the movie, this isn’t true. In fact, his fear that he is big a scary is what causes him to act that way and chase people away. It isn’t until he starts behaving like himself that he finds the love and acceptance he always wanted.

(Here’s more on View to a Skill: Understanding Point of View)

Fear: What terrifies the character emotionally; some version of experiencing that wound pain again.

This is another way of saying “stakes.” This is the hard part in many internal conflicts, because it’s not always clear what’s at stake. Understanding a character’s fear helps you figure out what the protagonist is afraid of experiencing again. They’ll do anything to prevent that.

Shrek is afraid of rejection, so he’ll isolate himself and chase people away before they have a chance to reject him. Being rejected by someone who matters to him is his fear. What’s at stake is him opening himself up and having people run away again, proving that he truly is a big scary ogre unworthy of love.

What’s at stake is proving the fear is true.

This works especially well for internal conflict because the risk is typically emotional.

(Here’s more on The Wheels of (Character) Change)

Identity: The false self the character presents to the world. The emotional armor that protects from the fear, created by the belief, that came from the wound.

This is where it gets fun. A character’s identity is what they want everyone to see (the ogre). It's the wall they’ve built to keep people from seeing the real them, the person who was hurt and still feels that pain. This is the façade, and how they show themselves to the world.

This is how your character acts, and interacts with others. This is who they’re going to be at the start of the story. This is the person who needs changing, because this person is based on lies, and on that wound and belief system. They’re not a “real” person even though the character has spent a lifetime making them real. But this fake persona, this identity, is what’s making them miserable.

It’s the starting line for the emotional character growth and the beginning of the character arc.

Essence: What lies under all the emotional armor. The real self.

And here’s the finish line for that character arc.

This is the person the character truly is or wants to be. They discover who they are over the course of the story by what they experience through the plot. By the end of the novel, they make a choice/realize/come to accept this and act in a way that allows them to win. The acceptance of the essence is often what allows them to figure out the plot piece they need to succeed in the climax, so this is closely linked to the plot arc.

How to you take this guide and apply it to your plot.


After you’ve figured out all the pieces to this inner journey, you can look at your plot and see where you can push the character’s buttons.

Whatever the fear is, craft situations that force the character to face and experience that fear. Make that fear the thing they need to overcome to succeed in the external plot. Look for ways in which acting from the character’s essence (who they really are or want to be) allows them to win, while acting from their identity (the false persona) makes them lose.

Establish that fear and identity (the starting point for the character growth arc) in the beginning of the story. Show an example of them getting an opportunity to face that fear, but running from that fear instead.

Set up the status quo, and introduce that longing or need. Don’t explain how they got the wound, just show the effects of that wound and fear. Show the belief by how they live.

Overcoming that fear is what allows the protagonist to make the switch from living in fear (where they hide behind that identity to avoid the wound) to living courageously (where they live in their essence and be who they really are), then at the climax that fear is going to be present in some way. The final test so to speak.

Major plot turning points are great moments to layer in the conflict by having the plot decisions conflict and/or hinge on something that also forces that character to grow. To summarize:
Character arc, inner journey, internal conflict, all overlaid on the plot arc and exterior conflict.

While you don’t have to stick to this basic structure, it is an easy (and proven) way to see how the internal conflict and character growth can aid with plotting, and increase the tension and conflict for the entire story.

If you want more, Jami Gold has written two great posts inspired by the same workshop:

Internal conflict can deepen a novel and add a compelling emotional layer to the story.

I suspect character-focused writers probably do a lot of this instinctively, just as plot-focused writers tend to be natural plotters. If you lean more toward the plot side, this is a useful guide to ensure you haven’t forgotten, or skimped on, the internal conflict of your novel.

EXERCISE FOR YOU: Take five minutes and follow this guide for the protagonist in your current WIP. Look for ways to deepen their character arc.

How do you handle character arcs and internal conflict?

Find out more about conflict, stakes, and tension in my book, Understanding Conflict (And What It Really Means).