Where Do I Go From Here? Plotting Through “What Happens Next?” Part One 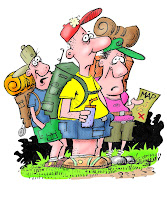 Getting past a sticky point while plotting.

Whenever I’m not sure where the plot goes it’s almost always due to a goal issue. I've usually lost sight of what the protagonist was after and why she wanted it in the first place.

The rough part is, I often know what happens next in the plot, which makes he whole thing ever harder to manage. The story needs to go there, but I can't quite figure out how to get the protagonist from point A to B.

When you find yourself in the same situation, step back and look at the scene from both a macro and micro perspective. Keep drilling down (or pulling back) until you find where the problem lies.


The protagonist’s story goal defines the novel: The protagonist is going to have a lot of goals over the course of the novel, but look first at the overall story goal (the core conflict). The big one that drives all other decisions. For example, if the protagonist’s goal is to find out how and why an old friend died, then everything in the story is going to lead to answering that question (even if it leads there in a roundabout way). Looking at the problem scene with this in mind, helps us figure out how this scene helps that larger goal.

(Here's more on the core conflict)


The major decisions and turning points provide the framework for the novel: There are three to five moments that make up the major turning points of a novel, and work as guideposts for the plot. This is where the plot is going. For example, the protagonist decides first to find out how and why her friend died. The steps to answering that question and resolving that goal might look like this: She uncovers a vital piece of information that will lead to the answer. She is blocked in some way by something significant. She’s surprised by something she was never expecting to find. She encounters something that puts her in inner conflict or turmoil. She finds the last piece of the puzzle. She figures it all out.

These are very rough steps to a basic plot, but they fit classic story structure format and give us a framework to figure out what yo do next. Find the specifics to fit those general pieces and we find the plot. (Of course, change them if need be, as not every story has to follow this exact format. These are general guidelines)

Sometimes working backward helps, so look at the end result and examine how the protagonist got there. For example, at some point the protagonist will find out how the friend died. How does she do that? Say she talked to the right person and uncovered some piece of evidence. Then step back: What action did she take that revealed this evidence? What led her to that moment? Something put her on the path to this revelation. She overheard a conversation that suggested she speak to/go to/investigate that final piece of the puzzle. Step back again: What was she doing when she overheard that conversation? What got her there? Keep stepping back until you get to the sticky point.

Don’t like working backward? Start at the beginning and consider the various steps involved in how the plot could unfold. How would she begin investigating a friend’s death? Maybe she'd check hospital records, interview medical staff, talk to family and friends. Now think about what might prevent those people from helping the protagonist (conflicts and obstacles). What does she have to overcome to get the information she needs? Remember that no one should be eager to help her, since that eliminates the conflicts and makes it even harder to plot. Look at every person who has the ability to help her and think about why they can’t or won’t (it doesn't have to be a mean or spiteful reason, just plausible).

(Here's more on why the characters shouldn't help your protagonist)


The places where the protagonist is put into inner conflict: Don’t forget to examine the character arcs as well. These are moments rife with conflict, and good places to discover missing or weak goals. Look for situations that not only block the protagonist from getting what she wants, but choices, obstacles, situations that also affect her growth. Look for ways to push her outside her comfort zone. Does she have to break the law to get the information? Ignore a belief she holds deal? Make a sacrifice?

Also check the theme. Are there any ways to illustrate or explore the theme in the obstacles she finds or the choices she has to make? For example, in The Shifter, being trapped is a theme, so I often had my protagonist dealing with people trapped in some way (literally and metaphorically). Being trapped caused or influenced the problems my protagonist had to overcome. How might the theme guide your obstacles?


What the protagonist wants in that scene: Finally, look at the scene that isn't working. What does the protagonist want at that moment? Something she has to do? If you can’t think of anything, go back scene by scene until you find a spot where she does want something and work forward from there. Odds are that’s when then plot went off track. Are the other characters in the scene doing everything they can to stop or block the protagonist? (Even if they want to help. Obstacles are about things being in your way, not just someone trying to stop you). What’s the next major step she's working toward? What are the smaller steps leading up to that? Can the protagonist be trying to achieve one of those steps?

Telescoping from macro to micro goals can help you keep the whole story in your head and suggest places you can draw from for goals and plot points. Everything your protagonist does will lead her toward solving that core conflict or growth as a character (often both at the same time). Think about what she has to do to solve that story question: in that scene, in that chapter, in that act, and even the whole book. If you’re stuck on the micro issues, look at the macro and vice versa.

Sometimes not knowing what to do next can also be a motivation issue, but that’s another post.

Where do you find yourself getting stuck on where to go next? Does outlining help? Who do you think gets stuck more often: pantsers or outliners?