Do I Look Like a Protagonist? Ways to Describe Your First Person Narrator 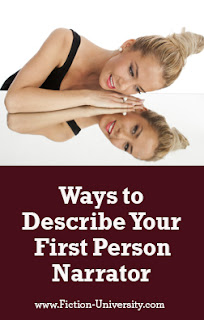 Finding ways to describe your first-person point of view narrator isn't easy--and a few things not to do.


First person point of view has its own share of challenges, but one of the trickier ones is describing your narrator. You’re always looking out, never in, and it can be awkward to have your character talk about their own attributes. If done poorly, you wind up with a character who sounds incredible self absorbed.

Before I suggest things to try, let’s start with some common cliches you don't to do.


It seems like an easy answer to simply have the character look in a mirror and describe what they see, but it’s been done so many times (and done badly) that agents and readers cringe when they see it. If the novel happens to start this way, it’s likely a kiss of death unless there's a unique twist to it.

Avoid the “Let Me Introduce Myself” Cliché


Another common cliché is having the character introduce themselves and describe what they look like. For example, “I’m your average gal, five foot four, brown hair, blue eyes” or “I’m nothing special, six foot, black cropped hair and brown almond eyes.” This was quite popular a while back, but these days, it usually comes across feeling stale.

Be Wary of the “Slip in the Detail” Trick


It’s not uncommon to see a detailed slipped in casually, but it often feels awkward, because it's not natural, such as, “I brushed my long, blonde hair.” Who notices the length and color of their hair when they brush it? While it’s not a no-no, and folks do it all the time, push yourself a little and strive for better.

Instead of the tired cliches, try one of these:

Compare and Contrast Your Character's Traits


My favorite trick is comparison. People naturally look at other people and judge them in relation to themselves. I have my protagonist Nya show she has blonde, curly hair this way:


She (the sister) pushed a blonde braid of her Healer’s ponytail off her shoulder, jingling the tiny jade and gold beads woven through it. Her hair looked pretty all smooth and straight like that. I couldn’t afford the irons to flatten my curls.

I do the same thing here in another book:


He was handsome, if stern, with blue-black hair just as dark as mine.

We can easily slip in a detail by having a character notice someone else. Not only does this allow you to describe your character, it gives you an excuse to describe other characters as well.

(Here's more on how much you need to describe your characters)

Make a Joke About a Character's Trait


We can also have the character remark on an attribute in a self-deprecating way that fits what they’re doing. I was able to sneak in Nya's height this way:


It gained me a few paces, but he had the reach on my short legs.

People don’t mind pointing out their flaws (it’s weird, but we do it) as a way to deflect criticism. Characters can do it, too. It even gives you more opportunities yo show voice, so it's a win/win.

Hint at the Trait, and Let Readers Figure it Out


Hinting at details allow the reader to figure things out without us spelling it out. If the narrator is short, show them reaching for things just out of their range. Tall? Let them duck or bang their heads on doorways. If their hair is long, let them shove it out of their face or twist it back in a ponytail. Look for things that someone with that trait does or encounters.

(Here's a tip on getting to know your characters)

Let Other Characters Describe Them for You


And of course, we can always have someone else comment on the narrator’s looks. Call them Red, or Shorty, or Cueball or say they wish they had curly hair or a pug nose or freckles. It's a natural way to have characters interact without drawing attention to the fact that you're describing them.

Whatever you do, make it flow smoothly with the narrative. If it sounds awkward or unnatural, cut it. Good description is seamless, especially if it’s about the person describing themselves.

How would you describe a first-person character?