Two Reasons Why Your Protagonist Isn't Driving Your Plot 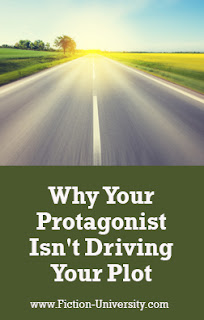 The protagonist is the driving force behind the plot, but sometimes he or she feels just along for the ride. Here's an updated look at why your protagonist might not be driving your plot.

First drafts are often full of holes and weak characters, which is fine since we don’t always know where a first draft will lead. It’s okay for it to be a mess. But once we know how the story unfolds, it’s time to go back and make everything is serving that story.

A good place to start is with the protagonist. Is (s)he driving the story or is (s)he just along for the ride?

First draft protagonists can go several ways, but two common miss-directions are too much time spent in their head and too little. Too much is a draft filled with lots of internalization and thinking out every detail, but not a whole lot of actual doing going on. Too little is all plot and not enough thought to know why any of it matters. For a well-rounded story, you want both.

The Protagonist Is Thinking Too Much


A thinking-too-much protagonist needs a boot to the butt to get moving. This type of protagonist can slow the pace and stall the story and make it feel as though nothing is happening in the plot. Odds are you worked hard to make it clear what your protagonist needed to do and why, you just skimped on her actually doing it. Look for scenes where:

There’s a lot of deliberating about what to do: You might be talking about the action your protagonist needs to take, and either showing it afterward (making the story feel repetitious) or skimming through the action itself because it feels like you’ve already written it. You might even find yourself summarizing the action in a “so we did this” or “after we did this” type fashion.

To fix: Take those planning sessions and turn them into active scenes. You know what happens, so either skip the planning altogether (often you can) or trim that planning scene down to the bare minimum and letting the scene play out in real time.

There’s a lot of internalization: Thinking about the past, making witty observations, chatting with the reader – all are ways in which your protagonist might be delaying the action. While it’s good to show the reasons behind the protagonist's choices, over-explaining why it matters and the long haul to get there often creeps into a first draft because we’re not sure what action we want our protagonist to take. We brainstorm by letting the character go over it all in her head, and it never makes it to the page.

To fix: Look for the reasons why your protagonist is thinking those thoughts. Perhaps put her in a scene where getting out of a jam depends on what she's done in the past, allowing you to keep the action moving and still show those deep thoughts. You can also give her a friend (or even an enemy) to talk to and make the conversation part of a larger and more active scene. If all else fails--start cutting a few lines of internalization at a time and see if it improves the scene.

The Protagonist Is Thinking Too Little


A thinking-too-little protagonist is one who’s there to act out plot, but has no feelings about what he's doing. This usually results in a plot that feels aimless, since nothing matters, and there’s no sense of stakes to carry the story forward. Now that you know what happens, dig in and let your protagonist say why it’s important. Look for scenes where:

Choices are made: Choices send the plot in new directions, but without understanding why those choices are made, readers might be left wondering why they’re following along. Before long, plot events starts to blur and it’s hard to remember what’s happened since none of it carried enough meaning to really sink into readers' head. They feel lost, ungrounded, and flat out just don’t get it.

To fix: Make sure your protagonist is having some thoughts about he's doing. Let him weigh the pros and cons, and make a choice that feels logical to him, and keeps the reader interested. Get in the sense that the protagonist is acting on his own feelings and needs, driving the story forward toward a personal goal.

Stakes are mentioned: You might have shown why something is bad, but without context from the protagonist to put it into perspective, readers might not get exactly what “bad” means. Or worse, they might not realize the stakes have escalated at all if the protagonist isn’t concerned or does little to say why this is a bad thing. This leads to flat stories that are easy to put down and never pick back up.

To fix: Make sure the stakes and how those stakes affect the characters is clear. This is personal for your protagonist, so get into his head and show how and why whatever he's doing matters. Convey the cost of failure so readers understand what's at stake and can worry right along with the protagonist.

More people are talking than your protagonist: A protagonist along for the ride often comes across as an observer while other characters talk, plan or even act. Long stretches of dialogue might go by where he barely says a word or has a thought. There’s nothing in the scene to show how he feels about what’s being said, so you could effectively yank him from the scene and readers wouldn’t even notice he was gone. This leads to readers wondering whose story it is and why they should bother reading about it if the protagonist isn’t even an important part of it.

To fix: Get your protagonist in there. He's not just an observer, he has an opinion on what’s going on, ideas of what to do, and thoughts that might even go against what other characters are saying. Make sure he's acting to accomplish a goal instead of watching it come to fruition.

(Here's more on The Trouble With Reactive Protagonists)

Your protagonist might not be in the driver’s seat of your story in a first draft, but by the final draft, (s)he need both hands tight on the wheel. Make sure (s)he's both advancing the plot, and advancing the character so readers always know whose story it is and why that story matters.

Do your first-draft protagonists start out in the driver's seat or do they need tweaking after the draft is done?