The End is Near: What Makes a Good Ending? 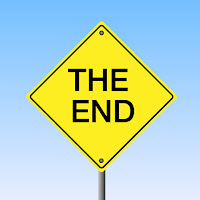 
Some writers have troubles with beginnings, or more commonly, middles, but for me, it’s endings.

I tend to rush them once I get close, summarizing instead of letting things build to the big bang. I always have to rewrite them, usually several times before I get them right. These days, I work hard to figure out my ending before I start the book. I've learned (the hard way) that the easiest books for me to write are the ones where I know my ending ahead of time.

What makes a good ending?


Tastes will vary of course, but generally, readers want to see the problem the book has been exploring all along resolved in a satisfying way. They want to be surprised by something they didn’t see coming, but a surprise that still fits with the story – not something out of the blue they couldn’t have figured out on their own. They want to see the protagonist grow or change in some fashion that made everything she went through in the book matter in a personal and meaningful way.

Yeah, but how do you do that?


Endings start long before the actual climax, because that’s when you start laying the groundwork for them. You probably have some idea of how you want your story to end. There’s a good chance it’s part of your one-sentence “this is what my book is about” line. Everything in the story has been building to this moment. If it hasn’t? Then that's a red flag for why your ending is giving you trouble. Try looking through your story and asking:

What constitutes a win for your protagonist? If you’re not sure, look at your beginning. What major thing happened that set your protagonist on her journey? What has she been trying to accomplish all along? That’s what you’ll need to resolve in some way in your ending.

What constitutes a win for your reader? You’ve set up certain expectations throughout the book and your reader is going to want to see those expectations satisfied. What promises did you make? What problems did you dangle? What risks were taken that hinted at greater consequences?

Are you escalating the stakes?


The first draft of The Shifter had this problem. The ending was exciting, but it didn’t raise the stakes any higher from the major event at the end of the third act. Because of that, the ending was just kinda there. My agent had me revise it, and she gave me some advice that really changed my thinking. She said to go deeper, not wider, with the story, and to tie it in thematically to Nya’s struggle.

At first, I didn’t understand what she meant, but then I figured out that it’s easy to add more stuff to make things harder on your protagonist, but the stakes aren’t really higher. More lives in jeopardy isn’t high stakes because readers don’t know those people. They care about the characters.

Look at what your protagonist has at stake on a personal level. Look at how that ties into the story from a thematic aspect, so the ending has more poignancy. For The Shifter, it was about being trapped, so feeling trapped factored into the climax. Same with the sequel, Blue Fire, but this time it was all about escape. In Darkfall, if was about fighting back. Those ideas influenced what was done so it tied into the rest of the story.
(Here's more on writing the final showdown)

You were saying something about a surprise?


Endings we can see coming a mile away bore us, but the fact is, we pretty much know the hero is going to win in any book we pick up. There is only so much mystery you can squeeze out of “will the protagonist win or not?” The tension and wonder will come from how they do it and what it might cost them. This is why personal stakes are so critical. But we also need to have our protagonist act in a way that is unexpected, so the way they solve the problem is a surprise.

One thing I like to do is look at the moral beliefs of my protagonist and have her do something she’d never consider doing otherwise. But the trick is, she still has to be true to herself. She can’t just throw out all she believes in. She has to make that choice, hard as it is, for reasons that fit who she is.

Maybe it was a line she refused to cross before, or a risk she was never willing to take. Something that might even have been suggested earlier in the novel and rejected. But the stakes are higher now, and not doing it will result in something far worse than doing it. It’s a sacrifice she’s willing to make, even though it’s going to cost her a lot.

How do we get her to that point?


This is where the thrill building comes in. It takes time to heap enough horrible onto your protagonist so that she’s willing to throw it all away for the win. A good place to start is around the end of the third act, when the protagonist has just hit a wall or found a problem that seems insurmountable. She’s trying to solve it, really feels that she’s not going to be able to, but knowing she has no choice but to try.

Pacing is critical here, because speeding things up helps build that breathless on the edge of your seat feeling. Let your characters worry a bit more, think a bit less. Things start going wrong and cascade into more and more trouble. Everything tried fails or makes things worse. Put your protagonist on that slippery slope, and don’t give her a lot of time to catch her breath. Let her struggle, let things get worse and worse but she still manages to squeak by. Then hit her with the climax, and the start of the end.

Let her lose. Not “lose” lose, but force her into a position where she really has to think outside the box, find something unexpected and crazy that no one will see coming. For this to work, she has to be pushed beyond anything you’ve done to her so far. Feeling like it’s all or nothing, do or die, will put her right where she needs to be. And it forces you to think of over the top, last ditch efforts for her to succeed.

Whatever your ending, remember that it’s only as good as what’s come before it. The entire story builds to this moment, and everything your protagonist has done will be put to the test in some way to solve this final problem.

Look back and find things you can pull forward: stakes you can raise again, failures you can revisit, problems you can exacerbate. The ending is the climax of all of this, so it makes sense that all of this will provide the tools – and fodder – for your protagonist to save the day. Or not, if that’s the kind of ending you want. No one says your ending has to be happy.

What do you feel makes the best endings?