The Easiest Way to Fix a Novel's Sagging Middle 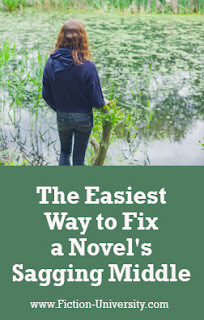 A sagging middle is a problem a lot of writers face during a first draft, but there is one trick that will help get you through it.

Raise your hand if you've ever had trouble with the middle of your novel.

I can't tell you how many 150-page drafts languished on my hard drive when I was still trying to figure out how to write an entire novel. I'd start out fine, but then after my inciting event and my first major plot point it ground to a halt. Not every draft was bad, but most of them were, well, boring.

They dragged, they snoozed, they spent a lot of time repeating the same types of scenes or activities and I just stopped working on them, sure that the idea was terrible and I was an equally terrible writer.

The Middle of a Novel is Hard, because that's Where the Hard Work Happens


Middles make up roughly fifty percent of the novel. It's where all the try and fail plans occur, and where the protagonist does the most plot-driving work. Beginnings are all about setting up the story (in the good way, not the bad way), and endings are all about resolving the conflict and bringing it all home--but middles? They have to connect those two points and make it interesting. 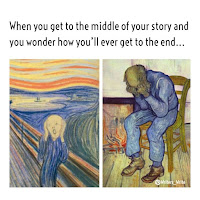 That's a long time to go without some forward momentum in your plot, some revelation of the world or characters, and some sense of the protagonist accomplishing something. Without these things, a story grinds to a halt, even if the scenes in the middle are exciting in their own right. It's just that they start to blend together after a while and the reader feels like there's nothing new going on.

The exciting parts of novel also tend to be the start and the end, so we often spend more time and effort on those, and the middle gets less attention. It's like an airport terminal where the characters wander around, grab some food, and hang out until the call for the climax is heard.

And since most writing advice tells us not to dump backstory into the beginning of a novel, the middle is when we think, "Now that I have the reader hooked, let's dump all that backstory I was holding back on them!"

None of this are good recipes for a happy middle, let alone a happy ending, since your reader has probably wandered off to do something else by now.

Middles used to be the hardest part of the novel for me--until I figured out one key plot point that changed it all.

The Midpoint Reversal. The Savior of Sagging Middles Everywhere.


As I struggled with yet another dreary middle of yet another first draft, I wondered--what would happen if I broke it in half and added another plot point?

And thus, the midpoint reversal was born. 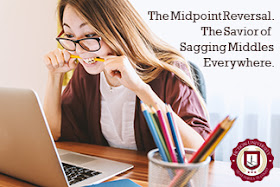 I realized that if I planned for something to happen in the middle center of the novel, that gave me a plot point to write to.

But this wasn't enough. I also wanted it to be unexpected enough to change the story in ways that gave me things the protagonist had to recover from, as well as send the story rushing forward.

Tastes and story needs will vary, but I like something major and shocking for my midpoint reversals. That gives me a goal for my protagonist to work toward (and thus providing narrative drive to get me through the sagging parts) and something exciting for my reader to anticipate (or be surprised by if I spring it on them).

But it can't be just anything.

A good midpoint reversal is something that throws the entire story sideways. It:
Do this right, and you'll have readers flipping pages fast, amazed by the unexpected turn of events, and dying to see where this new predicament goes.

A good midpoint reversal will also raise the stakes, even if they were high to begin with.

This plot point will often add a level of personal consequence that wasn't there before, or reveal a secret (or problem) that was hidden. Sometimes this problem will requires a sacrifice, be it a personal belief or an ally. Sometimes it's all of these things at the same time.

Once you've shocked your reader, you'll have new momentum driving your story toward the end. The mid-point reversal has made your protagonist's goal harder to accomplish, will cost them more to win, and will have serious consequences if they fail (heck, sometimes even if they win).

5 Questions to Get You Through a Sagging Middle


If you're stuck in a sagging middle right now, step back, look at what happens in the middle chapter of your novel, and ask:

1. What is the absolute worst thing that can happen to your protagonist at that moment? Is that what's going on? If not, find a way to make it happen and force the protagonist to work overtime to get out of it.

2. Is there a way to make your protagonist's inner goal clash with the outer goal in a disastrous way? Impossible choices almost always grab readers and create unexpected plot paths. That old "damned if you do, damned if you don't" dilemma can really crank up the tension in a story.

3. What's the one thing that could happen that would make your protagonist give up? Do it, even if it's hard. Then think up a way to keep the protagonist fighting anyway. Yes, there's a good chance it'll create some plot wrinkles to get out of, but the story will be the better for it. If it was working as is, there wouldn't be a sagging middle, right?

4. Are there any deep dark secrets that could be revealed and ruin everything? If so, reveal them, and for extra fun, see if you can make the result be not the one the protagonist was worried about. Make it worse.

5. Can you mirror the climax in any way? Sometimes a midpoint reversal will foreshadow what's to come, either by showing the protagonist failing or hinting at what they'll need to do to win. This is often referred to as the false victory or defeat. For example, if the protagonist has to rely on others to win in the end, show her trying to do it all by herself here, and failing because of it. That way, the growth of accepting help by the end shows in how she changes her behavior and succeeds.

(Here's more on Stuck in the Middle: What Makes a Good Middle)

Getting through a sagging middle is a lot easier if you have stepping stones. Look at your plot as a path through the swamp. Each stone is another step toward a major set piece, and once you get there, each stone is a step toward how the protagonist gets out of it. Before long, you'll be racing through those middles without getting your feet wet.

Do you struggle with sagging middles? What helped you get through it?