5 Ways to Fix a Stalled Scene in Your Novel 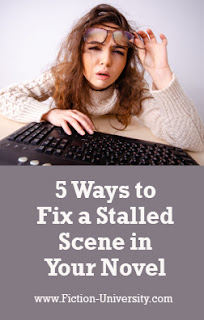 It’s a terrible feeling when the scene you’re working on grinds to a halt—and you have no idea how to get it moving again.

Imagine it—you’re in the middle of a writing session, your fingers are dancing over the keyboard, and suddenly…

The words, your fingers, your understanding of what comes next in your novel.

Your scene has stalled and you don’t know why, and what’s worse, you have no idea what to do to fix it.

We’ve all been there, and it doesn’t matter if you’re a brand-new writer working on your first story or a professional author with fifty published novels. Sometimes, scenes just stall. Ideas poof out of your head and leave you hanging. Your characters stop talking to you, and the last thing they said was so out of the blue that you can’t fathom what they meant by it or what they plan to do.

A stalled scene can derail a writing session, but it doesn’t have to derail your novel.


Stalled scenes happen when we don’t have the information we need to continue writing them. Maybe it’s uncertainty what the protagonist needs to do, or we don’t understand a character’s motives, or there’s a bit of world building we need to figure out. Whatever the problem, at the heart of it is, “I don’t know…”

To get the scene moving again, you just need to figure out what information you (and the scene) is lacking.

Here are five ways to find that information and get those words flowing again:

1. Give the character something to do.

Goals drive a scene, and if your protagonist doesn’t have one, the scene will stall. Look at your scene and ask:

Can you identify the goal? Your protagonist should be actively trying to achieve a goal or solve a story problem. Goals are also external, so if the goal is “sitting around thinking” in some way, odds are it’s not actively driving the scene. There’s a difference between “planning the next step” and “wondering what to do.” Planning provides forward action, while wondering is static.

Is the goal yet another tiny step in the plot? Sometimes scenes stall because your subconscious knows there’s no point to it, and a too-similar goal can trigger a “stop writing this” stall. Steps to a larger goal are good, but too many can drag the story down and make it feel aimless.

How many steps removed from the main plot is this scene? If it's more than three or four, you might be too far from the core conflict. Yes, you have a goal driving the scene, but achieving it doesn't actually matter to the bigger story, so the scene flounders.

Make sure your stalled scene had a strong goal driving it.

(Here’s more on Oh, Woe Is Me: Strengthening Character Goals)

2. Make the character work for it.

Conflict provides the tension in a scene, and without it, a scene can feel pointless. Maybe there’s no conflict to struggle against, or the conflict that’s there is too weak to drive the scene. Look at your scene and ask:

What’s in the way of your protagonist getting what they want? Getting the goal should be more than just following a list of instructions and they win. It should be hard, and require the protagonist to struggle to overcome it.

Is the conflict weak? Some conflicts seem like real issues, but they’re not tough enough to be a true problem. They don't cause the protagonist to struggle, or worry, or make a tough choice. It’s the story equivalent of climbing a mountain or fighting through traffic—yes, it’s hard, but it didn’t affect the story or the protagonist in meaningful way.

Is the conflict more of a delaying tactic than a real issue to overcome? Weak conflicts often fall into this category. The obstacle in the way is just that—in the way. Once the protagonist gets past it, the story continues. But if you cut that obstacle from the story, nothing actually changes. It delayed the story, it didn’t develop it.

Make sure there’s conflict to struggle against, and that it’s worth fighting. 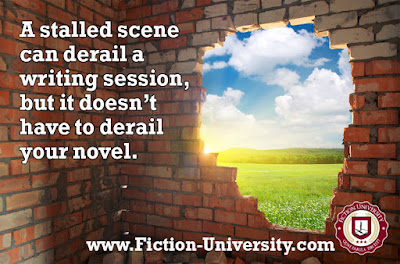 Stakes make readers worry, and if they don’t worry, the scene loses importance. Maybe it doesn’t matter if the protagonist succeeds in this scene or not. Maybe nothing in the scene will negatively affect the protagonist or their goals. Look at your scene and ask:

What happens if the protagonist fails in this scene? There should be risks and consequences for failing—and sometimes even for succeeding. They don’t need to happen, but the threat ought to be on the protagonist’s mind.

Are the stakes too high? Too low? The scene might have stakes, but they’re falling outside the sweet spot that makes readers care. If the stakes are “everyone might die” or “the protagonist might die” there aren’t really any stakes. Readers know the hero won’t die. Same with low stakes—a slap on the wrist isn’t a big deal if it doesn’t hurt the protagonist or their plans on some way.

Make sure there are risks, and the consequences for failure can actually happen, and are worth worrying about.

(Here’s more on Plotting for the Thrill: Making the Most of the Worst That Can Happen)

4. Give the protagonist a reason for being there.

Motivation provides fuel for the narrative drive—and the goal. Maybe the protagonist has no real reason to do what they’re supposed to do. Maybe they don’t care if they succeed not, or you’re asking them to do something they’d never do. Look at your scene and ask:

Why does the protagonist want to achieve the goal? Something is motivating them to act in this scene. Maybe they need something, or want to avoid something, or this is a step to a larger plan, but there’s a reason they’re putting themselves at risk here.

What are they afraid might happen if they don’t do this? Some motivations stem from fear. If the protagonist doesn’t act, those terrible consequences will befall them or someone they care about.

Why does it all matter to them? Sometimes a scene stalls because you don’t truly know what’s motivating your protagonist to act in the novel. They’re doing what plot tells them, but you never developed strong motivations that stem from a real emotional place.

Make sure the protagonist has solid motives for acting.

5. Step back and determine what’s missing from the scene.

It’s possible the scene has all the right narrative mechanics, but something outside the story is the problem. Maybe you need to do some research so the protagonist or situation is believable. Maybe your setting or world needs more development. Maybe you’re missing a key piece of the plot, and this scene leads into that missing piece. Look at your scene and ask:

What’s the purpose of this scene? Some scenes get added to a novel because you feel they ought to be there, when they actually don’t. You feel you need to show X, but X doesn’t affect anything in the story. Maybe this is a scene you felt you had to write, bit it stalled because you don’t actually need it.

What do I need to figure out to move forward? The problem might not be this scene, but where this scene leads. Maybe this scene sets up something important in a few chapters, but you don’t yet know how that scene unfolds. As soon as you figure out the later scene, what this scene needs will become clear.

How does this scene fit into the larger story? The scene might have stalled because it’s just there to add backstory or infodump. You have to show a bit of history, or a character exhibiting a certain trait or skill that’s vital later, but there’s no other reason for the scene to be there. These scenes can usually be merged with others—just find a scene where whatever you need to do here will logically fit there.

Take the time you need to find whatever is missing from the scene. If knowing it won’t affect the outcome, you might try making a note and moving on. Such as [add detail] or [add emotional reaction].

(Here’s more on Busta Scene: Getting Past Hard-to-Write Scenes)

When the words stop flowing and you feel that sickening lull in an otherwise productive writing session, don’t despair. A stalled scene is usually nothing more than your subconscious telling you there’s a piece of the puzzle missing, and it’s giving you a chance to find it.

Treat a stalled scene like an opportunity to deepen your story and tighten you plot.

EXERCISE FOR YOU: Take five or ten minutes (or as much as you need) to study your scene and examine how it fits into your larger story. Look at each of the above options and questions and apply or answer them for your scene.

Do you have a stalled scene right now? What stalled it?
*Originally published September 2010. Last updated December 2020.
Find out more about plot and story structure in my book, Fixing Your Plot & Story Structure Problems.