5 Questions to Ask for Stronger Scenes 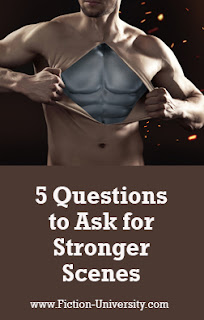 If you have trouble plotting, ask these five questions in every scene.

I've always been a natural plotter. That doesn't mean I was always good at it, mind you, just that figuring out what my characters had to do rarely left me scratching my head.

I think it's because I typically think in "What has to happen in this scene?" terms. And the action, the "what happens" is driven by a character with goal. Create a problem, toss in something that has to happen, add a protagonist who needs something, and voila, you have a plot.

In basic terms, a plot is a series of events that allow you to illustrate your story. It's simple, yet often difficult, which is why so many writers struggle with it.

As you start your scene, your protagonist will have a goal. It'll probably be a story goal, because the whole point is to move the story forward, right? But maybe it's a smaller goal, or a internal goal, or a unconscious goal. Maybe it's not anything they want, but something you as the author wants.

But a protagonist wanting something isn't always enough to craft a great scene. That want might be too straightforward, or not provide enough inherent conflict, or be too easy to achieve. The scene needs layers to really make it shine.

Look at the scene and ask yourself:

Sometimes all you'll find is one answer on this list, but the more of these you can add to the scene, the richer your plots can be. The outcome won't be as obvious, because there will be multiple problems going on and any of them might be the goal driving the story at that particular moment. But all of them will be doing something to deepen that story.

1. Can the protagonist be in any danger?


Odds are your protagonist will be in some kind of danger that relates back to the stakes. While you don't want to throw danger in for the sake of danger, there are probably ways in which you can raise the stakes and cause some trouble.

Let Murphy's Law play a role here, and if something can go wrong, let it.

However, if it's totally obvious that something is going to happen, resist to urge--such as suspense/horror movies where you know a cat is going to jump out at some point right before the bad guy shows up. Do something unexpected instead. Unless the goal is to fake out the reader and then have the unexpected happen, then go for it.

(Here's more on What's at Stake? How to Make Readers Care About Your Story)

2. Can the protagonist learn or reveal a secret?


Secrets, whether learning the truth or discovering there is truth to be had, are great ways to grab reader interest. These are good plot points to use when you have quiet moments but still need to keep the tension high and the story moving.

A secret can also be an unexpected twist to reader expectations. It can be a more mundane secret, such as a clue that moves the plot forward or provides a little foreshadowing, it might be a secret slipped in that goes almost unnoticed, yet carries great importance later on.

(Here's more on The Joy of Discovery: Keeping Readers Hooked Through Story Revelations)

3. Can the protagonist be in conflict with someone, something, or themselves?


Conflict drives a plot, so the more of it the better (within reason of course). Don't give your protagonist a break. Even if it's small, let there be personal demons to overcome, a difference of opinion to feel guilty over or have to compromise with. Moral struggles to go with the physical struggles, or even an item that won't cooperate, such as a locked door, or a gas valve that won't turn off.

4. Can the protagonist make a choice?


Choices are what leads your protagonist down the story path. If they're not making some kind of choice, then the book can feel random and the protagonist reactive instead of proactive. But if they need to choose something, then the opportunities for unpredictability go up. But do be careful of a situation where there is no actual choice, just a fake choice. If the choice is obvious and no one would ever choose the other option, it's not really a choice.

Choices give readers the sense that the protagonist is acting and driving the story. And every choice provides an opportunity for it to be the wrong choice, which can increase the tension and the stakes.

The choice also doesn't have to impact that particular scene. It can be a choice that has greater repercussions later in the story. Those bad decisions might come back to haunt the protagonist.

5. Can the protagonist fail at something?


In a novel, winning is boring. Failure forces the protagonist to think on their feet and come up with new plans. The failure doesn't have to be huge, and small mistakes that lead the protagonist down the wrong path can work very well. For example, failing to see a friend is hurting, failing to spot a clue that would save them, failure to heed their own apprehension. Any of these can affect what the protagonist is trying to achieve.

The failure might also be a huge mistake where everything goes wrong and the protagonist fails on every level. Failure to see, failure to act, failure to notice. And like the choices, this can have consequences later.

(Here's more on Do Your Characters Have the Right Flaws?)

There are plenty of things you can use to plot, but the more trouble your protagonist gets into (quiet emotional trouble or end of the world trouble), the more fun it is to watch them get out of it.

How do you develop your scenes?