Why Rescuing Your Protagonist Might Be a Terrible Idea 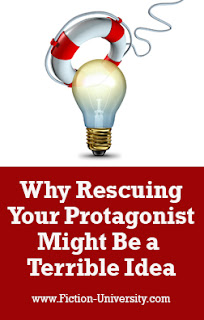 It’s fun to get your protagonist into trouble, but before you do, consider how they might get out of it.

I enjoy putting my protagonists in terrible danger, and throwing them into situations they can’t easily get out of. Which is both a lot of fun, and a whole pile of frustration, because sometimes I don’t know how to get them out of that trouble. I’m one of those writers who likes to write into a corner and force myself to come up with more unpredictable solutions, which make for better scenes.

Except when it makes for a worse scene.

Back when I was working on my Healing Wars trilogy, I faced this situation multiple times. My protagonist, Nya, gets captures a lot. So I had to get her out of that jam a lot.

The first idea that always popped into my head was to have another character come to her rescue, but I discarded it almost immediately every time.

Because the hero is the one who's supposed to be the hero.

I often see stories in the works (usually while critiquing query letters) where the hero is being rescued by another character. It's usually another major character and this is how that character either gets introduced or proves their worth in the story.

Having someone rescue your protagonist is a bit of a cop out from a plotting standpoint.

It solves a problem in such a way that your protagonist has no new goal. They haven't done anything that requires them to do anything else. They're just "safe." And where's the fun in safe?

Sure, that new character might bring their own set of trouble to the story, but in most cases, they could have easily been introduced in a way that still forced the protagonist get out of trouble on their own. Or at least play a useful role in the escape itself.

Seeing how the protagonist gets out of trouble is a big draw for readers.

“How is the protagonist going to get out of this?” they wonder, gleefully turning the pages. “What clever idea will save the day?”

I love stories where the protagonist is clever and resourceful, both to read and write. It’s satisfying to devise creative solutions for my characters problems, and a lot more entertaining for my readers as well.

But I'm not bashing rescues completely.

Like all things writerly, there are times when rescuing your protagonist is the perfect thing to do for your novel. You might have multiple main characters and it’s their turn to shine. Or you need to give a major secondary character a moment to be the hero. Love interests frequent come to each other’s rescues and show that they’re equals and well matched.

But when you're debating someone coming to your protagonist’s rescue instead of them getting out of their own jam, consider all your options. That way, you'll know you're choosing the right solution for the story, and not picking the easiest choice for the scene.

Here are 9 things to consider when planning a rescue for your protagonist:

1. Is there anything from their past that might aid them in escaping?

Perhaps they have a skill they can use in a clever way, or they faced a previous problem that might be adapted to this new situation. They might have picked up an object along the way they could use.

If not, can you add something? Maybe this is a good opportunity to flesh out your protagonist’s backstory or skill set.

(Here’s more on Sprinkling Seeds of Backstory: How This Writing Faux Pas Can Work in Your Story)

2. Is there anything in the scene itself that can help them?

Setting isn't just there to look pretty. If you describe a trellis, why not use it? If a storm will help, add a storm—but do it before the protagonist gets into a mess so it feels natural. Picture your setting and what details might be of use, just like your protagonist is probably doing.

3. Is there anything a secondary character in the scene might do?

Having someone else in the scene come up with the answer is not the same as being rescued, because the protagonist still needs to put that idea into action. I actually love having my sidekicks and best friends show their smarts and come up with brilliant ideas, as it lets them grow as characters, too.

You might also look at ways the characters can work as a team to escape. Maybe other characters can create the distraction needed for the protagonist to take action.

(Here’s more on What Are Your Secondary Characters Good At?)

4. Can the bad guys make a mistake that lets the protagonist act?

A word of caution here: convenient mistakes feel contrived, so don't do anything that's clearly there because you couldn't figure out how to get your protagonist out of this jam. But little bad-guy slip ups that feel natural, or are caused by an outside force possibly aiding the protagonist (like a distraction), could allow the protagonist to take advantage of a situation in a plausible way.

(Here’s more on 6 Ways to Identify a Contrived Plot)

5. Can you change the location to a more escape-friendly venue?

If there's no way for the protagonist to escape where they are, move them. It's much harder to keep someone trapped on the move, and there are more opportunities for things to go wrong. Maybe the protagonist needs to be taken to another location for trial, or the antagonist wants to see them, or they’re headed off to prison.

6. Is there a skill or situation later that the protagonist will need that you could use now to lay the groundwork?

Some skill sets need to be developed over a story to make them believable, but nothing says you can’t shift around when readers discover them. Maybe this is the perfect moment for your protagonist to reveal they can do X, which is a small part (or a big part) of what they'll need later when they do Y.

Another word of caution: If you do have the protagonist reveal a skill to escape, make sure you go back and add a little groundwork previously so it doesn’t feel contrived. A hint here and there is usually enough if you don’t want to spoil the surprise.

(Here’s more on Why Should Anyone Help Your Protagonist?) 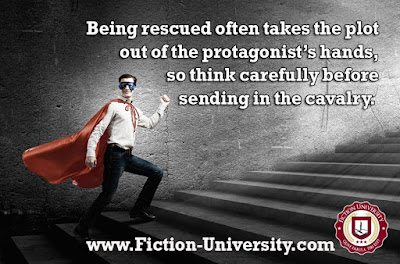 If you absolutely must rescue your protagonist, perhaps…

1. Let the rescue cause more trouble for the protagonist and change the situation.

Another character saves the day, but it only gets worse. Maybe they escape, but now the entire city guard knows they’re on the loose. Or maybe a hidden ally is exposed when helping and suffers consequences for it. Maybe the protagonist wanted to be captured to put another part of their plan into action, and this rescue ruins it.

(Here’s more on If Nothing Changes in Your Novel, You Have No Story)

2. Let the rescue make the main conflict harder to resolve.

Perhaps rescuing the protagonist is the worst thing anyone could do. Whatever the main problem of the novel is, it’s now a lot harder to accomplish due to this rescue. And maybe the protagonist knows this, so they debate whether or not it's wise to be rescued at all.

3. Let the rescue give a secondary, but still important character, a little limelight.

Sometimes sidekicks need to shine, and letting them step up and be the hero works well to round out those characters. This is especially true in a series, where the other characters need to grow same as your protagonist. And since they've been hanging out with your protagonist all this time, it makes sense that they might have picked up a few tricks.

(Here’s more on Sharing the Spotlight: How Much Page Time Do Supporting Characters Need?)

Being rescued often takes the plot out of the protagonist’s hands, so think carefully before sending in the cavalry.

If the rescue does nothing more than get the protagonist out of trouble, it might not be the best option for the novel. But if saving the day serves the story is other ways, and helps round out the entire cast of characters, then it might be worth doing.

EXERCISE FOR YOU: Take five minutes and examine any scene where your protagonist is rescued. Is the rescue taking the easy way out of the problem, or is it making things worse for the protagonist?

How do you feel about heroes who need rescuing?