Writing Great Endings -- And Not Just the Big One 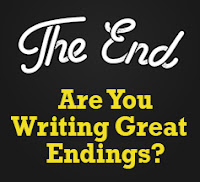 
Since the ending is the last thing readers read, it often determines how much they like the novel. A fantastic story with a lousy ending can ruin a book, just as a ho-hum novel with an amazing ending can have readers raving. But don’t forget—scenes have endings, too, as do chapters, and of course, the ending of the novel itself. If we pay attention to all our endings, we stand a much better chance at keeping readers happy from page one.

What makes a good ending? Let's look at them top to bottom:


Novels end when the core conflict of the story is resolved. How this is done is up to the writer, and there are countless ways to do it, but a novel end should do one major thing: It should resolve the story to a satisfying conclusion.

"Satisfying" can mean anything. It might have a happy ending, tie up every loose end and leave the reader joyful and bubbly. It might have a bittersweet ending that resonates the theme. It can even end with readers afraid to turn out the light and go to sleep. Good doesn’t equal happy if happily ever after is bad for that particular story.

Also keep in mind that what works for a standalone book is different from a book in a series.

If you’re unsure about your ending, ask:

1. Does it resolve the core conflict of the novel?

This is the big "this is what my book is about" question that your protagonist has spent the entire book trying to answer. If you show them a murder on page one, they expect that murder to be solved by the end of the book. If the protagonist meets his soulmate, they’ll expect them to fall in love. Put an evil sorcerer in their path, and they expect her to be defeated. If there is no conflict to resolve in the climax, that’s a big red flag that there’s a flaw in the novel itself (usually no core conflict or a lack of a main goal). The protagonist should be facing off against the antagonist at the end of the book to fix a problem and achieve a goal.

(Here’s more on core conflict of the novel)

In a series: In a series or trilogy, it’s common for the core conflict of the series to carry over from book to book (such as, get the ring to Mt. Doom, or defeat the Empire). In this case, each book typically ends with completing one step of that overall problem. Think of it like a recipe—if step one is getting all the ingredients into a bowl, then book one might be all about collecting the team. Whatever step the protagonist is trying to do in that book will be the core conflict for that book, which will be working toward the larger series conflict overall.

2. Does it answer the major questions posed in the novel?

You don't have to tie up all the loose ends, but there are always questions in the story readers will want to know the answers to. The bigger the deal you made of these questions over the course of the novel, the more readers will want to see them answered. For example, if you teased them all book about the real identify of the protagonist’s father, they’d be fairly upset if you never said who that was by the end.

In a series: The discovery of a big secret is a common element of many series, so you’d naturally not want to reveal that in book one. Revealing the secret would work similarly to solving the conflict—small clues that lead up to the big reveal at the appropriate time. However, the “attention = expectation” rule still applies. Drop a small hint or two and readers will be content to wait. Make a huge deal out of it, and they’ll still expect the answer in that book. It’s a balance between teasing and holding back. You want to make readers curious and wonder, “ooo, what does that mean?”, not smack them in the face that they don’t know something and refuse to tell them.

(Here’s more on the best places to reveal story secrets)

3. Is this the ending most readers are hoping for?

This is a tough one, because we want to surprise readers, but also give them what they expect. The trick is to do what they expect in ways they don’t expect it. Sure, the hero finds love, but not with the person that seemed obvious. Yes, the evil wizard is defeated, but in a completely different way from the big battle everyone has seen (the recent movie, Dr. Strange has a nice ending along these lines).

If your book ends in a way readers likely didn’t want it to go, make sure it's clear that that's how it needed to go. A great example here is the ending to the movie Mama. You want something different, but you understand why that was probably the best outcome for the situation, heartbreaking as it is. The YA novel, Life As We Knew It is another strong example of an ending that could have gone several ways (some of them sad) and readers would still be okay with it.

In a series: Equally tough here, because you can have endings that leave the protagonist in a bad state and defy reader expectation. It’s not uncommon to do so and fix it all in the next book in the series. Just be wary about how your readers might react to such an ending—if it goes too far, they might be too upset to trust you enough to read the next book.


If you’ve ever stayed up all night saying, “one more chapter, then I’ll go to sleep,” you’ve seen a skilled writer who knows how to end chapters. They’ve left readers hanging just enough to make them want to know the answer to a question and will turn the page to get that answer. And that’s the key to a great chapter ending:

Chapters should end in ways that make readers want to turn the page.

This doesn't necessarily mean a cliffhanger (which is often resolved immediately and not a real hook), but a question left unanswered, a detail they want to see more of, an issue they need to see resolved. It’s a strong “need to know” that keeps them invested in the story.

Ending a chapter with the suggestion that the answer will come in one or two more pages will almost always get the reader to stick with you—as long as it’s an answer they want to know.

2. Give a sense of something about to happen

Readers want to know what happens next, so if it’s clear something (and usually something they’re excited to see) is coming on, they’ll keep reading.

3. Have a character lose

Even though it takes multiple tries for the protagonist to overcome obstacles in the plot, readers still expect them to win and are usually surprised by a loss. They’ll turn the page to see if their beloved hero really did just fail, or if she’ll turn it around and wind up the winner.

Let’s be honest—plots can be predictable. Even when readers are loving the book, it’s common for them to have a pretty good idea of where the story is going. So it’s not a big deal to stop reading even when there is a compelling reason to go on. But toss in the unexpected, promise them they haven’t see what’s coming, and they’ll stay put.

5. State a plan of attack

Anticipation is a great hook, but knowing the plan is set and the action is about to happen will also get readers to turn the page. One word of caution here—it’s also a potential stopping point for readers, because they know the story is about to shift gears and they could decide to take a break before it gets too far into the action.

Yes, ending with a character in dire straits can be effective, but use this sparingly, as a protagonist always in jeopardy gets old fast. Drama can turn to melodrama in an instant, and there are no consequences to dangling your protagonist off a cliff, readers won’t be worried when she’s standing at the edge of one.


Scene endings are a lot like chapter endings. They're moments where the story has reached a turning point or resolution, and the reader has an opportunity to book the book down. It’s not a bad idea to end scenes the same way you’d end a chapter—with something driving the story forward. But scene endings are also moments where it’s acceptable to have a quieter ending that gives the reader a breather if they need one. Scenes often end in the middle of a chapter, so characters are gearing up for an event, or just coming down from an event. There's usually enough inherent drive to keep the story moving, yet still give a sense of resolution.

What type of scene ending you write is often determined by the pace of your novel, and what genre you're writing in. For example, fast-paced genres are expected to have un-put-down-able scene endings, while slower-paced genres can end on quieter notes. Mixing them up is a good idea, as the same ending every time gets predictable, and predictable is boring, no matter what's going on in the scene.

(Here’s more on writing a scene)

A good ending makes readers want more, no matter where is appears in the novel. Whatever type of endings you choose, think about the reading experience you want your reader to have. What do you want them to take away from your story?

Do you think about all your endings, or just the final one?