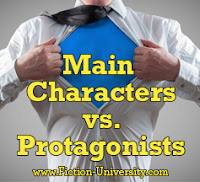 Visit any writer's forum and you'll see tons of posts that talk about the MC (main character). You'll even see posts that talk about the main characters (plural), because there are several. This has always struck me as a little odd, because by definition, "main" is the most important, so that suggests singular. All those posts got me thinking about a couple of things.

1. Can you have more than one "main" character?
2. How is the main character different from the protagonist?

In Robert Jordan's Wheel of Time series, there are dozens of important characters and points of view, but to me, Rand al'Thor is clearly the main character. The story revolves around him, even when he isn't there. His actions drive the plot, making him the protagonist as well. Other characters play vital roles and have their own goals and stakes, but if Rand were to suddenly go poof, the story couldn't really continue. The goals and stakes of the other characters depend on what Rand does, even if it's obliquely.

(Here's more on knowing whose story it really is)

In contrast, in Tom Clancy's Hunt for Red October, Jack Ryan stands out to me as the main character. The story revolves around him and his hunt, but he isn't the protagonist. Ramius is the one who's acting and driving the plot, because his choices and his actions set the entire story in motion (which is also the sign of a good antagonist, though I don't think he plays that role here). If you took Jack Ryan out of the story, Ramius would still act as he does and his story would end tragically. If you took Ramius out of the story, Ryan has nothing to do. But Ryan plays a vital role in balancing the Ramius plot. We care about Ramius because we care about Ryan, and he cares about Ramius.

I think this subtle distinction is what throws a wrench in a lot of stories (some of my own included) There are either too many characters trying to drive the plot, or none of them are trying to drive the plot. If no one is a clear protagonist, the story lacks drive and you can find yourself halfway through a novel and wondering what happens next. If everyone is trying to have their say, you find yourself with multiple plot lines going that leave readers wondering if they're reading three books in one. They're multiple stories inspired by the same situation, not a solid novel with a strong plot.

(Here's more on getting the most out of the main character)

Then there are stories where there really are multiple main characters. I think for this to work, each character has to have the same stake or goal in the story. The details may change, but the story remains the same. Sara Shepard's Pretty Little Liars series is a great example of multiple main characters. Four girls who all have the exact problem with the same stakes. The specifics to each girl are different, but the goal and the end result is the same for all of them. What I find especially interesting about this series (besides the fact that it's just so darn good) is that the person driving the story is the mysterious A, who plays the role of the "protagonist" (making the plot happen) even though they're clearly the bad guy. How's that for skill? Take out any one (or two or three) of the main characters and the story still works. Take out A, and the girls have no problem to worry about.

So how can we apply this to our own stories?

Understanding who the main character is and who the protagonist is goes a long way to untangling any troublesome stories. Identifying them sounds easy, but if you're struggling with a story right now, take a hard look and see if maybe the people you thought were running your story really aren't. Forcing a character to play the wrong role might be causing frustration. The story might not be working because there's someone else who really has the reins, and the main character needs to react to what this protagonist is doing for it all to work. Or the opposite could be true. And in some cases, it's the antagonist who is the problem, because they aren't truly opposing the protagonist so there's nothing to struggle against.

It never hurts to ask yourself, whose story is this, and who's driving the plot?

Who's the main character is your novel? Who's the protagonist? Are they the same or different? What about for multiple POVs?