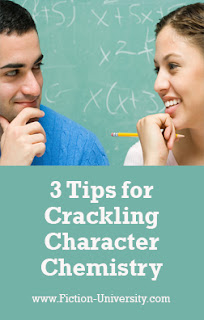 Part of The How They Do It Series
JH: When sparks fly between characters, so do the pages. Bonnie Randall shares tips on creating irresistible chemistry between your characters.
So, I’m reading a novel right now—romantic suspense—and I’m enthralled by the snap-crackle-pop of sexual tension between two of the characters.

Except…I don’t think they’re the characters the author intended me to get giddy for. In fact it might even freak her out to know that the hottest couple she created is… <drumroll> the hero and the heroine’s grandmother.

Misguided or not, the sparks between hero and Grandma got me thinking all about CHEMISTRY this month. Specifically—what are some quick ways to create chemistry that crackles?

There is a reason why the bad boy/princess trope has had so much traction for so many years in romantic fiction. Or why the film Pretty Woman still gives us butterflies decades after its release. Think of the best reason(s) why your couple should never be together, then make it abundantly clear to the reader that they are unequivocal soul mates.

But…how?
Create values, mores, or vulnerabilities they share despite all their differences. Further, allow each of them to defend the other’s vulnerabilities, mores, or values.
Example—remember in Pretty Woman how neither Edward nor Vivian would kiss someone on the mouth? They each shared a belief that this was a step far more intimate than either of them wanted to be. As such they respected that about each other, and were simpatico…especially when they finally ended up kissing each other—on the mouth.
(Here's more on The 4 Essential Ingredients to a Sizzling Romance)

Sniping—so long as it moves the plot forward and/or reveals a hitherto unknown fact about the character(s)—is the jazz that makes us race through the pages just to see what they’ll say to each other next.

(Caution: Beware of senseless snark, though; conversations must serve a purpose other than to merely showcase how clever your character is. Additionally, care needs to be taken to ensure you protag/antag has an equally witty adversary, or you’ll run the risk of them just looking like a smart-mouthed jerk).

Note also—and speaking of adversaries—that chemistry need not be reserved to occur between love interests only. Some of the greatest chemistry both on screen and in novels happens when foes meet face-to-face. Fans of the superb series Justified see this in any of the dialogue swapped between Boyd Crowder and Raylan Givens. An added dimension between two well-matched enemies (also apparent in Justified) is having them

b) Liking each other, but not respecting what each other represents 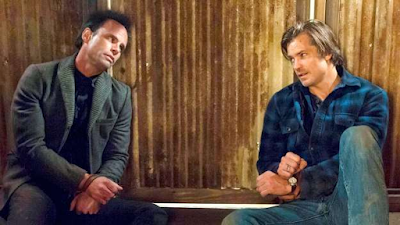 3. A Common Goal For Opposing Reasons

They both want the same thing, and have agreed to join forces (think ‘the enemy of my enemy is my friend’) yet whatever they are working toward is for wildly opposing reasons. The classic ’80’s film Romancing The Stone delivered this dynamic in spades, and the chemistry between the characters sizzled.

As before though, don’t limit this technique to romantic pairs only. An antag and a protag pairing up can generate some excellent chemistry (and stakes). So can two opposing antags. Either way, the complexities within any of these dyads, or triads, will transcend just “crackling chemistry”; it will deepen the emotional layers of your character, showing just how far, or how low, they will go.
(Here's more on Rhythm of the Words: Voice in Dialogue)
Exercise: Consider the novels you’ve read or films you’ve watched that offered up excellent chemistry between characters. Did the chemistry result from any of the three observations above? Or did it manifest from a dynamic left undiscussed in this article? Please share your discoveries in the comments below, and allow all of us to add to our ‘cheat sheets’ as we move forward with our own projects.

Oh, and those characters and novel I referenced in the opening paragraph? They’re CiCi & Reed from Shelter In Place by the indomitable Nora Roberts. I dare you to read it and not ship them—even if it’s only just a little ;)