The Scary Season: Tips on Bringing the Scary to Your Novel 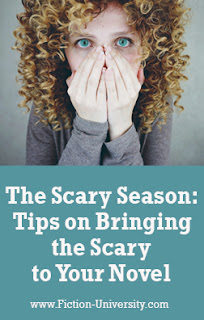 Part of The How They Do It Series
JH: We can learn a lot by studying other authors' novels. Bonnie Randall shares two novels that taught her a lot about tension and making readers crawl out of their skins.

Halloween and horror. One cannot be peeled from the other, and we expect to be scared during this spooky season. Seems to me though, that some of the best—or perhaps most effective—frights happen when we are not expecting them.
This month I’m going to do a quick deconstruction of two novels I’ve read this year, pointing out the elements that made them such effectively horrifying reads—devices to be stored on the index cards we keep in our heads which build our own stories’ scaffolding.
*Caution: Spoilers abound here, so if these novels are on your TBR pile, you might want to bookmark this post until after you’ve read them.

1. Jar Of Hearts by Jennifer Hillier 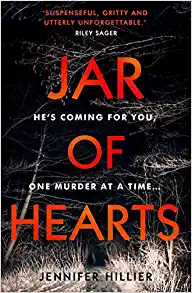 On its face, a straight-up suspense / thriller that seems to be a typical ‘Who’s the Serial Killer?’ trope. In fact, Jar Of Hearts, as a story, isn’t even all that scary; I have even read reviews (and I agree with them) that call it out for its abysmal fails at realistic police procedure, and for stretching the willing suspension of disbelief way too thin.

That said, the horror captured and conveyed here is not within the plot. It’s within the character.
Geo is an early 30’s bombshell whose life is bookmarked by the disappearance of her best friend back when they were teens; a vanishing we learn quickly, as Act One opens, she was not as mystified about as she’s always had everyone believe.
Geo is picked up in her power suit while delivering a presentation in a board room—the cops, after all these years, have cracked the cold case and now know that, way back when, Geo aided and abetted her then-boyfriend who raped and murdered her buddy; burying the girl in the woods.

And the proverbial race is on after this opening bomb drops for, while both Geo and her old boyfriend are in the slammer, killings eerily reminiscent of that murder resume.

Sounds fairly typical for the genre. So why, and how, is it scary?

Tone: Hillier clearly has a taste for early 90’s alternative / industrial rock and in this novel two familiar tracks backdrop some pivotal scenes—Wonderwall by Oasis and Closer by Nine Inch Nails.
Anyone familiar with these tracks cannot deny the darkness, menace, and subtle threats embedded in the lyrics. It’s a subtle infusion in this body of work, yet effective for how it leaves the reader with an unsettled feeling; unsettled by the scenes themselves, and unsettled because, unconsciously, we are now also aware that these songs make up a soundtrack the characters like and listen to.

We are, after all, the content we gravitate to. And that brings us to the next scary element in Jar Of Hearts.

Character: Throughout Act One and Act Two, we empathize with Geo, we’re along for the ride of her story, but…we know something’s off. It’s hard to put one’s finger on.
Is it the way she trades sex with a guard for favors inside jail? Nah. Anyone would sacrifice their scruples to survive.
Was it how she helped her old boyfriend bury her friend’s body? Possibly, but maybe not; battered women, especially when they are only 16, will do some inexplicable things.
Is it perhaps how she flat out tells us, again and again: “I compartmentalize. I rationalize bad things I do.”? I think we’re getting closer, yet again, it’s so subtle that, until the Weapon Of Mass Destruction drops in Act Three, it just seems that when it comes to Geo there’s something we only slightly reckon is out of plumb.
The brilliance here is that, when all is revealed, it is so despicable a truth it smacks you right across the face: there are monsters among us—and sometimes they are beautiful, seemingly hapless women. Sometimes they are very young. Sometimes we even sort of like them, and yet…their evil, though insidious, is still something you always kind of knew was right there. A stain on their soul you can see, you were just never quite sure what you were looking at (until you were very sure indeed).
Geo gets into your head. She upends you, she disturbs you, and she horrifies you. So for whatever else is procedurely schlocky and sloppy about Jar Of Hearts, the character work is outstanding, and stays with you.
(Here's more on Scaredy-Pants! 4 Breeches-er- BREACHES That Elicit Fear in Your Characters) 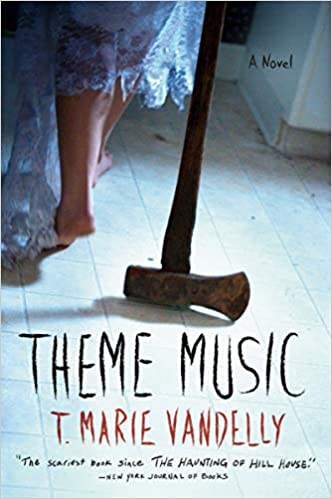 Choices / Setting: I debated here, whether to say that, once again, character is what makes Theme Music knock-it-out-of-the-park debut so freakin’ scary that last night I was prowling around my house past midnight just to make sure there wasn’t an ax murderer lurking behind the drapes.

Except it’s not quite protagonist Dixie’s character that make this novel hella creepy. It is the choices she makes that leave your eyes bugging and going “Whhhhaaatttt? NO!” yet still flipping pages like a person possessed (pun intended).
See, Dixie was 18mos old when her father ax-murdered her mom, three brothers, then himself to death in the kitchen while Dix sat in her highchair eating Froot Loops. She remembers none of it, and the auntie who swooped in to take guardianship of her has stonewalled her learning anything about it either.

After all—it’s so ghoulish. Why would you want to know?

Except, Dixie evidently does want to know, because when the old murder house comes on the market she, now 27, enters a rental-purchase deal.
That’s the first WTF.
The second one is when she unearths all her parents’ old stuff out of storage and (don’t mind the mildew!) sets it up exactly the way it was at the time of the murders then says “Well this is very good” as the reader is sincerely goggling at it like a car wreck: You know the things you see are going to crawl into your head and hurt you, but…you Can’t. Stop. Looking.
Plus, Dix is so affable, you’re half incredulous, and half-laughing as, apparently unwilling to be out-ghouled even by her own bizarre choices, she continues—getting the full-color crime scene photos and spreading them out like playing cards in the kitchen…precisely where the dead bodies once lay.

This book is so incredibly creepy. It ups its own ante at every angle, and the setting is relentless; think the Amityville Horror house on steroids.

(Well Played) Gore: I am typically disdainful of gore. If you want to scare me, get into my head—don’t cop out and just go for the gross-out.
Now, make no mistake: Theme Music is exceptionally gory. The murder scenes are described in a far more graphic way than any true crime novel I’ve ever read.
Still, it works and would miss its own fear factor without it, because in this case the gore = the gravitas of the incident. The reader would not feel the exquisite horror of the events if the ax murder was merely stated or alluded to.
This is a clear case for show, don’t tell, and man-o-man do we see it—and it fosters the first (but not only) question we have about our narrator’s psyche: as in why in the ever loving HELL would the survivor want to live there?!

So, so good. So incredibly creepy, skin-crawly scary.
(Here's more on Creepy Clowns and Haunted Hotels—Unspooling Why Our Characters Get Scared)

So there you have it, my friendly ghouls! Thoughts? Have any of you read these works? Did they scare you in ways I didn’t mention? Other books outside the typical horror genre that were frightening for you? Let’s Talk!
And…HAPPY HALLOWEEN!