Outlines Are for Revision (Say What?) A Different Approach for Your Process 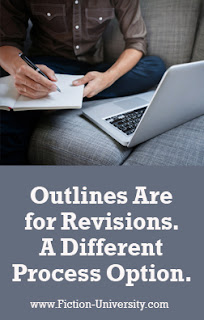 Part of The How They Do It Series

JH: Unless you've been lucky enough to find your perfect writing process, odds are anything that might help you be more productive piques your interest. Spencer Ellsworth visits the lecture hall today with a different way to write that uses both plotter and pantser brains.

Spencer Ellsworth has been writing since he learned how. He is the author of The Great Faerie Strike, a tale of the Otherworld’s first labor union, from Broken Eye Books. He is also the author of the space opera Starfire Trilogy from Tor, and many other short works. He lives in Bellingham, WA, with his wife and three children, works at a small tribal college, and would really like a war mammoth, please.

George RR Martin’s famous quote: “some writers are architects, and some are gardeners” has become Writing 101 gospel. The two are usually called the more catchy “plotters” and “pantsers.”* You know the archetypes. Plotters love 3x5 cards, use all the features in Scrivener, and have a dedicated corkboard of yarn twisted around tacks, like they’re running an investigation in The Wire. Pantsers sit down to a blank page and go, go, go, go… until they get stumped.

*(Note: “Pantsers” refers to going by the seat of your pants, not running around pulling people’s pants down. I don’t know how one would find time to write, if one was professionally pulling pants down. It seems a job with a lot of… back-end issues.)

But as with all binaries, no one is really all one or the other. Before I start writing, I write an outline about 1/30th the size of the finished word count. Then I abandon the outline the farther along I get.

That’s hardly an “architect,” unless I’m an architect yelling, three weeks in, “Let’s put a church in this office building!”

I believe that “plotter” and “pantser” are just two ways to conceptualize your relationship to the dichotomy at work in writing: the play of drafting vs. the work of imposing structure.

And I don’t think they’re the most useful way to think about that dichotomy, either.

I suggest a different dichotomy. In your head, there are two creative presences:

Your inner drafter is a kid, waltzing through the house, happily digging through bins of mismatched story-Lego and snapping them together, to build something like a story-sculpture.

Your inner editor is pattern-obsessed neat freak, removing all the mess, taking away extraneous blocks and color-matching everything, all to emphasize the finalized, gorgeous Lego-story construct.

How can you have both of those people in the same room at the same time? They’ll just fight!

Ah, friend, this is why you need outlines. No matter whether you call yourself plotter, pantser, architect, gardener, organic or conventional writer.

You just don’t need them before the manuscript starts.

Yes. Outlines are for revision.

(Here's more on Plotter or Pantser, You Really Should Outline the Second Draft)


Once I’ve passed the initial stages of getting beta readers to look over the draft, and doing my own read, on paper, I look at the book and figure out which parts need to be filled in, expanded, rewritten completely, or significantly changed.

As I go, I write a chapter-by-chapter outline that marks any major changes in bold. Like this.

There’s a lot of bold, y’all. Whole chapters are wrong. I always need a new first chapter. I need to combine separate chapters to pick up the pace, or expand chapters that were too crammed.

Here’s an example of what a chapter in my revision outline for my new book looked like, before I finished the revision. You can see that nearly half the chapter needed to be done anew:

1- Jane returns home from the asylum where her mother sent her after Jane asked about vampires. She uses witch-water to hypnotize her mother into thinking she’s been home a while, and follows the signs to find a door to the Otherworld when she discovers that the doors are tightly guarded by metal creatures and she can’t get in. A mysterious man in green briefly appears and suggests Hyde Park, saying “Old Pedgewedgewick still keeps his doors, for a riddle.” Then he disappears. Jane gets to the door, and meets Charles, and goes into the Otherworld—and it looks just as wasted and industrial as London.


I print up the new manuscript outline with the bold, and park it on my desk next to my laptop.

I do NOT go through, fiddling and changing the bolded bits one at a time.

Why? Because some of the bold is indeed editing, yes—fixing continuity issues, removing scenes—but much of it requires new drafting! Those are the whole new chapters, compressed information, and alternate takes I mentioned.

Get that drafter in here and get him some Legos!

And make the editor stay in the waiting room!

I make a separate folder in Scrivener and make a different document for each major new scene or major revision marked in bold that I have to write.

I write those new scenes WITHOUT looking at the first draft. I don’t worry about making continuity mistakes. The point is to draft as joyously as I did with the first draft, to be that kid dumping out bins of Legos with no regard for the mess.

Step Three: Sewing It Up:


Now comes the inner editor, with a dustpan and broom, a T-square and measuring tape, and their “Guide To Lego Sculpture Perfection.”

I do an editing pass where I weave those newly written scenes in with the rest of the book. I catch major mistakes and continuity errors, both in the new material and the old. If I decide I still need more material, I don’t go straight from editing to drafting. I finish editing a chapter and take a break to let the inner editor out of the room. I go on a walk, make dinner, do the dishes—whatever lets me switch gears. When I come back, I go straight to the drafting folder and craft new scenes, letting the inner drafter go nuts.

Then I take another break before I go back to editing it together.

And only once that is all done do I delete weasel words, overused phrases and cut bloated sections.

This process changed everything for me. I usually write about one novel and several short stories a year. The first time I tried to revise a novel for submission, I spent four years on it, after one year of drafting. I just kept fiddling and fiddling, trying new scenes and stopping, trying to be the drafter and the editor at the same time. It was torture.

Now revision takes me a few months. And I’ve already got that terrible synopsis done when I give the book to my agent!

If I find myself staring at a manuscript and just fiddling, I know I’ve put the inner drafter and the inner editor both in the same room.

So respect your inner boundaries, your story-Legos, and your process. Use an outline for revision.

Otherwise, you’ll be trying to garden and architect, plot and pants, all at once.


About The Great Faerie Strike