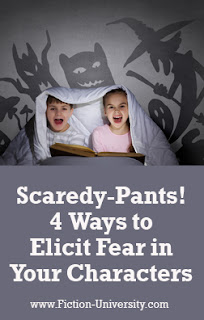 JH: Fear is a powerful tool for writers and helps us create stronger stories. Bonnie Randall takes her month place at the podium today to share tips on how to scare the pants off our characters. And if you're in the mood for some good old fashion scares for Halloween...checkout her short story No Vacancy. It's creepy and scary in all the right ways.

Take it away Bonnie...


When something happens that shouldn’t happen OR when something that should happen doesn’t, the results range from feeling mildly jarred to all-out terrified. Breaches to different cognitive constructs are the underpinnings of fear.

Here are four that may resonate if you’re crafting (or watching) frightening fiction this spooky season:


In 1996’s film Phenomenon, George is a simple-minded guy who, after being struck by an alien ball of light, becomes progressively smarter over the course of the story. The viewers’ reality mimics George’s own: something supernatural has happened to make him brilliant—and a whole lot more appealing.

Except ‘reality’ is upended when it’s revealed that the bright ball of light was actually an ocular mishap caused by a brain tumor which, as it enlarges, pushes all the right places to make George smarter…as it also slowly kills him.
(Here's more on Creepy Clowns and Haunted Hotels—Unspooling Why Our Characters Get Scared)

The most recent adaptation of Shirley Jackson’s Haunting of Hill House is certainly frightening—in part because the house looks the part. Equally, and sometimes more terrifying, though, is when scary things don’t look scary at all. These instances breach our expectations.

Something sinister that looks like it is not is a fantastic literary-scary device because it creates ambivalence, discomfort, and sometimes even shock.

(Here's more on Psychological Trump Cards That Cripple Us)

Horrifying and tragic in the literal, real-life sense, is the sociopathic mother who chooses to be deliberately cruel to her children. (Ahem: is the newest Joker not built on exactly this premise?) The incestuous father who molests his own child is—among other things—a massive breach of trust. The Church which betrays its faithful followers by being party to practices which invert the goodness and decency they worship breaches trust. Or what about the government of the country to which generations have been patriotic? What if it turns out to be controlling the minds of its constituents, ala’ Orwell’s 1984?

When trust is broken by something or someone we all assume (and expect) to be completely trustworthy, our entire world view is shattered—and that is very scary, indeed.

(Here's more on What Makes Your Characters Uncomfortable?)


Breached beliefs are a cornerstone of horror. Think kids can’t become possessed by playing with a Ouija Board? Watch The Exorcist. Think the Book of Revelations is just a cobbled together set of fables? Check out The Omen. Scoff at psychics and ghosts? Try The Sixth Sense for a double-whammy that will make you think and think and think all while you twist your pre-held beliefs around like a Rubiks Cube.

The best horror stories slide these breaches over top of each other like a Venn Diagram; defying both expectation and belief, for example. Or reality and trust.

Apply this template as you read and watch scary stories over the next week—and discover which cognitive constructs the author or director breached in order to craft a sensational scare!

About Within the Summit's Shadow


Andrew Gavin knows he's a train wreck. Before he even became a detective, Andrew’s first trauma—at only seventeen—occurred when he witnessed a gruesome suicide. Ever since, a delusion he calls The Dead Boy appears when his anxiety spirals too close to the edge…

Goaded by The Dead Boy, Andrew shoots and kills an unarmed teenage bully in what appears to be a fit of rage. Suspended from the force, and awaiting a possible murder charge, he retreats home to the Rockies. There The Dead Boy taunts him daily. Except…

Elizabeth McBrien, the childhood sweetheart he scorned, is back home in the mountains too, and shocks Andrew by revealing that she too sees The Dead Boy. Astonished that the spirit is not a delusion, but real, Andrew is further unnerved when he learns that The Dead Boy has ‘befriended’ Kyle, a gravely ill kid Elizabeth adores.

Now it's specter vs. cop in a race to save Kyle's life, and The Dead Boy insists that Kyle’s survival hinges on secrets Andrew holds about that long-ago suicide. Yet Andrew knows the entire truth will destroy him, and also annihilate any new chance he may have with Elizabeth. But they are running out of time; Kyle is dying, and The Dead Boy is ready to sacrifice anything in order to once again walk among the living…

“Within the Summit’s Shadow is a paranormal romance unlike any you’ve ever read. Set in the resort town of Jasper amid the splendor of the Canadian Rockies, this novel combines love, mystery, and a persistent, deeply psychological, very personal haunting. Randall really delivers the goods with this one.”