Power Up Your Prose with Rhetorical Devices 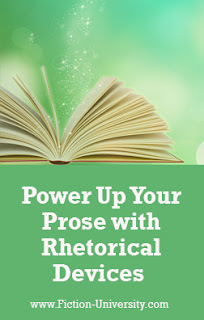 JH: Literary devices add zing to your prose, and give you tools to make literary magic. Suzanne Purvis visits the lecture hall again, to share some tips and thoughts on rhetorical devices.

Suzanne Purvis is a transplanted Canadian living in the Deep South, where she traded “eh” for “y’all.” An author of long, short, flash fiction, and poetry for both children and adults, she has won several awards including those sponsored by the University of Toronto, RWA, Bethlehem Writers, and Women Who Write. You can find her work in print anthologies, magazines, ezines, and ebooks.

Take it away Suzanne…

According to the dictionary a rhetorical device is a use of language that creates literary effect.

WAIT! Before your eyes glaze over or you close out the blog, I’m here to tell you, rhetorical devices are not just for poetry or literary work.

In fact, many genre writers use these devices to power up their prose. These devices work in picture books, middle grade, young adult, mystery, romance, horror, paranormal, suspense, well, you get the idea. They work in any genre. And they have the capability of making your writing stronger.

You’re probably already using some rhetorical devices in your writing. 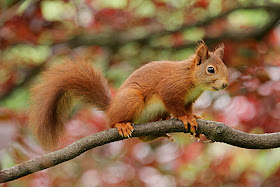 You probably will recognize some, not by their squirrelly-sounding Latin names, but because you’ve read powerful prose using these devices.

You don’t have to take my word for it. Let’s explore a few rhetorical devices, see if you recognize these devices and see how they power up the prose with examples.

ALLITERATION: repetition of the same beginning consonant of a word within a phrase or sentence.


For the title of this blog, I used alliteration. Power Up Your Prose

You’ll see many titles use alliteration for strength and effect.

Here’s an example of alliteration from Rob Buyea’s Because of Mr. Terupt.


“The first day of school. I was nervous. Somewhat. The sweaty-palms-and-dry-mouth syndrome struck. This wasn’t surprising--after all, I was coming to a brand-new place.

Here’s an example of alliteration from the middle grade book How Lamar’s Bad Prank Won A Bubba-Sized Trophy by Crystal Allen.


Since Saturday, I’ve fried Sergio like catfish, mashed him like potatoes, and reamed his corn in ten straight games of bowling.

In Allen’s example, you may also recognize the rhetorical device of a simile. Remember from high school?


In the above example Crystal Allen used . . . mashed him like potatoes. Which fits her main character, Lamar and adds humor.

Here’s another fun simile from A Man Called One, by Fredrik Backman


Ove stomped forward. The cat stood up. Ove stopped. They stood there measuring up to each other for a few moments, like two potential troublemakers in a small-town bar.

ASSONANCE: repetition of vowel sounds within a sentence or paragraph.

In this example the words using assonance actually rhyme, but that’s not always necessary.

hump and rump, maddest and baddest.

So in Crystal Allen’s one paragraph she used three rhetorical devices and she definitely powered up the prose. Here it is again.


Since Saturday, I’ve fried Sergio like catfish, mashed him like potatoes, and reamed his corn in ten straight games of bowling. And it’s just the middle of the week. People call Wednesday “hump day,” but for Sergio it’s “kicked-in-the-rump day.” I’m his daddy now, the maddest, baddest, most spectacular bowler ever.

Another easy to spot rhetorical device which I just used above is . . .

ANAPHORA: repeating a word or phrase at the beginning of three or four (or more) successive clauses or sentences.


I told you the names of the devices were squirrelly. But forget the names look at these wonderful examples.


I know that I lost a lot of blood. I know that a second bullet skimmed the top of my head, though I was probably already out by then. I know that my heart stopped.

He began each sentence with the phrase I know. . .

Using rhetorical devices often gives a rhythm and flow to the prose.

The repetition of anaphora also sticks in a reader’s mind and they subconsciously think this paragraph is important.

Here’s another example of anaphora from brilliant YA writer John Green. The main character, Quentin Jacobsen, has spotted his neighbor Margo at her locker.

This is the first chapter of the book. The reader knows Margo Roth Spiegelman is going to be an important character and she’s important to the main character, Quentin.


Millie nods, and I follow her into the study. But my search turns up nothing. No diary. No ledger. No file of incriminating letters.

This is just a tiny taste of the amazing rhetorical devices that are available to us as writers. In my upcoming Margie Lawson class Deep Editing, Rhetorical Devices and More. You’ll be treated to many, many more and an array of exciting examples. Hope you’ll join me.