When Fiction Doesn’t Work—What Can Be Learned? 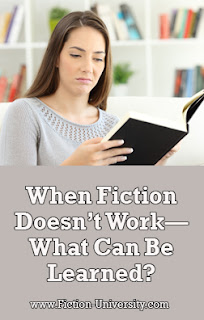 JH: You can learn just as much from a bad book as a good book.

Stephen King said “Unless you read, you do not have the tools to write.”

Books that whisk us deeply into a story, have characters who become dear friends, or use language in such a way that leaves us breathless, are powerful tools for writers, because those elements are replicable and take our fiction to higher, deeper, and more meaningful levels.

What, though, about fiction that doesn’t move you in any sort of positive way? Can writing lessons be gleaned from these pieces also?

I am currently reading a novel that has me turning pages—but not in a good way. I am so frustrated from waiting for the reveal of the ‘Big Bad Secret’ the heroine is withholding that I am thumbing through and skimming just to get to the place where she coughs it up. The suspense is not working for me at all, and partly it’s because of the ambiguity surrounding whatever this secret is; there are no clear clues or indicators, and what is presented is vague.

Also, there has yet to be a clear reason why the character is being cagey about her secret in the first place. Additionally, while the character herself is being indirect, the plot keeps getting >thisclose< to revealing The Big Bad…and then being thwarted by convenient twists.

To add to the frustration, there are also interludes which come in the form of handwritten letters from one character to another—and said letters are heavily implied to be written by the heroine with the secret, and yet (I cheated) actually end up being written by the hero when all is said and done.

The take-aways from this reading experience for me are:


1. When employing the device of the ‘Big, Bad Secret’, strike a good balance that leaves your pacing on the side of suspense rather than frustration—and always have a good reason why your character is keeping their secret under wraps in the first place.

2. If you are going to use an ambiguous POV, make sure you do not leave your reader feeling tricked. There needs to be at least one Easter Egg in each ambiguous passage that raises doubt—and maybe even makes it fun—for the reader to wonder “Is this really Character X? Or could this be Character Y who is thinking / doing / saying these things?”

Now: How about you? Have you read a book that was a real miss for you, yet was still able to impart some good learning?

Please share whatever that book taught you to do (or not do), but do not reveal the title. (Because jeez…what if it’s one of my books?!) Seriously, we don’t want to book-bash, and besides: one reader’s trash is another reader’s treasure; the book I am referring to here, for example, has far more positive reviews than negative, and is selling rather hotly too (which begs the question—what the heck do I know, anyway?!)

When Cameron Weste lands in her life, a stalker surfaces too, dropping clues to a connection between Shaynie, Cameron, and her lost, brutal Hellnight. Suddenly every card warns of deception, and nowhere feels safe. Shaynie and Cameron have to fight for their love - and their lives - as The Devil, their stalker, is determined to turn the Death Card for them both.