Starting your Series: Worldbuilding, Research, and… When to Stop 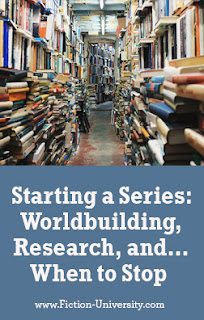 Like most things in life, it’s about the balance.

HERE I BLATHER ON ABOUT HOW I REACHED THAT CONCLUSION


When I first started writing my Golden City stories, I didn’t know what I was getting into. I planned a novelette of 15K words. I had an outline for a story set in 1900 Venice. I dove in and began writing… only to have the story tell me that Venice was not the right setting. After about 30 minutes of looking at European maps, I thought, Hey! I’ll set this in Portugal instead, and went on to finish the novelette.

Yes, I finished the first draft with NO research on Portugal done other than that initial 30 minutes with a map. In fact, the initial research I’d done involved Venice, so that all ended up in the recycle bin.


That is when the real research began. By the end of the first draft, I had a pretty good idea what details I needed for that story. I didn’t need to go back and research the royalty of 300 years prior, intensely study the language, or acquire historically accurate train schedules. I needed to know how people dressed, what they ate for breakfast, and how men and women interacted… all things I could get by reading a novel from that area and period.

I sold that story (“Of Ambergris, Blood, and Brandy”) to Abyss & Apex Magazine, and thought it was over. But the characters constantly pestered me to tell their stories, and eventually, I gave in. I sat down and began writing a novel that would follow up on those characters, and that turned into 3 novels, 2 novellas, and a Patreon serial novel.

One need was historical, one was strictly Worldbuilding. The two things are remarkably similar, though. Too fast or too little, and you end up with an insecure framework for your story’s world. Shoot for perfection in the worldbuilding, and you’ll never write the story.

REMEMBER, HASTE IS THE ENEMY OF PERFECTION

For worldbuilding and research, we have an excellent authority on hand, Fiction University’s Dean of Writing, Janice Hardy. She’s actually written several great article on the basics of worldbuilding, including: It's Their World: Worldbuilding from the Ground Up. You can also go to the left sidebar and click on the worldbuilding link to go to a lot of other great articles on the topic.

While you are writing your story, there are two different types of worldbuilding elements you’ll need.

1. Underlying themes and structures of the world.

2. Small, telling details that ground the reader in the character’s life.

You generally need the first type of worldbuilding worked out before you start writing. Otherwise you’ll spend a lot of time thinking, and thus writing, mistakenly about your world. If I hadn’t known that Oriana came from a matriarchal society, her attitude toward Portuguese society would have been very different. That would have cropped up in the way she looked at the world, how she interacted with other characters, both male and female, and in her internal monologues. It’s a pervasive attitude.

Rushing into a story before you have a basic understanding of how your world works can trip you up later. Once you’re written 115K words from an erroneous mindset, it’s very difficult to root it out*.

Smaller details—like how a character’s shoes buckle, her hairstyle, his valet’s name—those can actually be put in later.

So when you start researching, go into it with a mindset that there’s a basic level you have to achieve (see Janice’s post lined above for those basics.) Once you’ve got those down, you need to start writing.

Here are a couple of great articles about worldbuilding:

Zara Quentin’s How to Build a World (and Why): An Evolutionary Approach

Juliette Wade’s Going Beyond the Default in Your Worldbuilding

REMEMBER, PERFECTION IS THE ENEMY OF GOOD


You can spend an eternity getting your worldbuilding nailed down, but sooner or later, you need to buckle down and start writing.


When I was writing for Ace/Roc, I had to turn in a book roughly once every 9 months. That included research, writing the first draft, and editing, so I had to budget my time. I generally planned no longer than one month for researching and outlining the next novel. Before that month ended, though, I usually felt comfortable enough to start writing my book.

Indie authors have to do the same. Are you planning a book in six months? A year? Three months? Then you need to allocate some time to research and worldbuilding, but then spend the rest writing. Set a definite date for the day that you’ll put the books aside and sit down to write.

Even if you don’t think you’re ready, that your worldbuilding isn’t perfect yet, you have to sit down and write or the story won’t be told. So do more worldbuilding while you write.

Those small, telling details that I mentioned above don’t all have to be decided before you start. They can settled later. What I often do is leave a placeholder—@describe her shoes here—and move on, because I need to write.

So when do we take time to settle all these details?

For me I did some during my ‘after work’ hours. I would write for a specified period of time, and then I would check out something after my writing shift. But I found that most details could be researched between drafts. Once I finished the ugly first draft of my novel, I needed time away from it. I would go through the draft with FIND, make a list of all the things I needed to research, and dive into that.The second draft is where I stick all those tasty little bits in.

Doing research later also gives you a bit of flexibility. Unless you adhere very strictly to your outlines and notes, your story may have gone down a few unplanned avenues. You may have dropped something you researched prior to writing and need to research twenty other things instead.

So keep a running list, either separately or by using notations in your text, of things you’ll decide later.

ALSO, PERFECTION IS THE ENEMY OF PUBLISHED


I had a writer friend who, at the time that I last saw him, had been massaging his novel for 14 years, trying to get every little detail right. He submitted it to a small publisher at one point. It was accepted, but he withdrew it because he wasn’t satisfied. To this date, I don’t believe he’s published the thing.


This applies to your Worldbuilding and Research, too.

At some point, you have to accept that you are going to make some mistakes. No matter how hard you work to get the worldbuilding right, the science correct, the magic system logical, or the street names in 1901 correct, someone is going to disagree with something you did.

I’m not saying not to try, but I do think there needs to be a limit.

When I was researching for The Seat of Magic, one day before I turned in the manuscript, I ran across an 1896 film clip of women coming out of a factory on a certain street and panicked because I’d noticed that the street had…a sidewalk. Did my characters mention whether there was a sidewalk there? Had I gotten that wrong?

I began feverishly researching sidewalks in 1902 Porto, peering at very old photographs of the city and taking notes on which streets seemed to have sidewalks. Two hours into this, I stopped cold… because I realized no one would care. If after two years researching that setting, I had no idea whether those streets had sidewalks, no one else would know either.

After that ridiculous panic, I made a rule. If I couldn’t find the information within an hour of research on the internet, I was going to deem it an unnecessary fact and just call it one way or the other. Either say there was a sidewalk, say there wasn’t, or simply not mention sidewalks at all.

(This works for Worldbuilding, too. If you can find a reasonable argument to support your worldbuilding idea—or to negate it—within a set period of time, then just fudge your answer and move on.)

So do your worldbuilding, but make sure you’re keeping it under control.

Like most things in life, it’s all about the balance.

*This is how I ended up with a major character in The Golden City’s name spelled in the Italian way, not the Portuguese way. So sad. 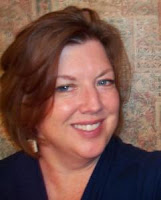 J. Kathleen Cheney taught mathematics ranging from 7th grade to Calculus but gave it all up for a chance to write stories. Her novella “Iron Shoes” was a 2010 Nebula Award Finalist. Her novel, The Golden City was a Finalist for the 2014 Locus Awards (Best First Novel). Dreaming Death (Feb 2016) is the first in a new world, with the books of The Horn coming out in 2017, and the sequels to Dreaming Death in 2018/2019


The Books of The King's Daughter

The books of The King’s Daughter chronicle the transformation of the title character into a soldier her father would be proud of… if he paid her any attention at all. Book One, The Amiestrin Gambit, is now on sale.

Ellis Dantreon is barely fifteen when she learns that her father--the king of Jenear--has decreed that she's to be trained as a soldier. Thrust in among the others at the newly reopened War College of Amiestrin, Ellis must earn the other cadets’ respect and trust. Not all of them are pleased at having a girl thrust among them. Ellis has to choose which ones to trust, sometimes pushing back against her instructors’ urging as she does.

But most of all, she must deal with a world far wider than the one she’s known. That world will shape her future, for the Gifted whom her meager staff have always considered myths prove to be very real indeed. Those people want very much to influence the course of a future Jenear. When it comes time for her young brother to take the throne, the seers among them believe that Ellis will decide whether her younger brother lives or dies, or if he’ll be replaced by another claimant to the throne altogether.

And hidden among the cadets and staff, some of those Gifted have arrived at Amiestrin...