Battered But Not Beaten? Pushing Your Character Past The Breaking Point 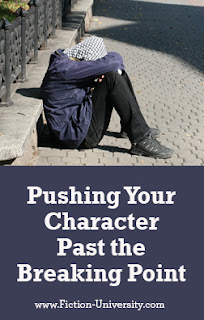 In the old days, it was called ‘a nervous breakdown;' the point where the strain and the stress and the experiences outweighed a person’s ability to cope.

Every story has its moment of profound despair—the end of Act II when our protagonist is beaten and their spirit is broken. In my real life, I have been in a personal ‘Act II’ for the past seven months, and I am here to tell you: it is misery. Violence, a death, then the burden of unanticipated responsibilities, duties, burdens and financial hits (what do you mean my hot water heater and my washing machine needed to be replaced in the midst of all this?!) have rendered me ‘inoperable’.

There have been days when just lifting my feet off my bed and placing them side-by-side on the floor has been a Herculean effort that was almost more than I could manage. The question “How much more can I take?” was swapped out for “I cannot take any more” as my body, brain, and emotional architecture began to crumble beneath the weight of all the sorrow and strain.

Still, I am a writer, and the life raft I’ve clung to (white-knuckled, and gasping) has been this: When I am able to write again, how can I translate my experience into even stronger depictions of how my characters manage the despair at the end of Act II? What will I do to keep their reactions attuned to the magnitude of their experience, and how can I bottle the experiences I am having in my own ‘dark night of the soul’ then transpose them onto the people I create on paper? What are responses that are consistent with intense trauma and suffering?

WARNING: Things are about to get personal.


After my long train of traumatic events, I endured what I call ‘the kill shot’: my Dad died, unexpectedly, and as I began the onerous task of being his executrix and being the newly anointed day-to-day caregiver for my Mom, (who is disabled by strokes), I came down hard with bronchitis. Illness happens when we are stressed and fatigued. We are, after all, a construct of mind-body-spirit, and what we do to one of those three will always be reflected by the other two.

So as your hero is hit with ‘The Crisis(es)’, it would not be out of the realm for his pre-existing condition to suddenly flare up or become worse, or for him to pick up a cold, the ‘flu, measles, the plague—whatever bug may be floating around in the world you’ve created. And yes—his life will suddenly become even more miserable as now he’s ill on top of everything else he is facing.

2. Sleep Will Be Compromised


Difficulty falling asleep, staying asleep, or a need to escape into the abyss of sleep—any of these or a combo of these will impact your character during The Darkest Moment. No one’s sleep remains unscathed by crisis, and sleep deprivation leaves one’s cognitive abilities further impaired, while over-sleeping means that she or he will indeed miss that critical appointment or rendezvous. And this, in turn, will raise the stakes.

3. Day-To-Day Life Will Be A Burden


When a person is pushed past their breaking point, a gray lens descends over everything, and she’ll wonder: ‘Will I ever feel happy again?’ Then, as the sorrow intensifies, (thus robbing the brain of endorphins and serotonin), she will answer herself and say “No. I really will never be happy again” because now the brain has re-adjusted to a state of misery that’s become stasis, or ‘normal’. Within this state, the most mundane tasks suddenly become momentous. Their home will become a disaster. Their vehicle will be a sea of used coffee cups. Brushing their teeth will be a chore. Showering too. Combing their hair will cease to be a priority. All of which will lead to—


The ghoulish circles scoring their eyes will reflect that messy sleep we discussed. The unkempt hair and raggle-taggle combo of clothing they wear will alarm the people who are used to seeing them well put together. Their bodyweight may indicate the rapid and dramatic change in their emotional architecture; speaking for myself, one of the most bizarre physical symptoms I’ve had since my Dad died has been a complete absence of my taste buds. And while I’ve entirely ceased being a slave to the scale, I have no choice but to believe people when they tell me I look gaunt and haunted. That and my britches keep falling off.


Your character will mess up at the end of Act II, and these mess-ups will add to their troubles. They will forget things. Abandon tasks mid-stride because something else has happened. They will throw an insurance check for $5000 dollars in the garbage *cough* then have to frantically dig through the filth to find it. Bottom line: breaking points mess with our minds. We will not be on top of our games.

Sidebar: I recently finished a novel where the character’s Dad also dies, then she is dumped by not just one, but two lovers, her remaining family is a dysfunctional land field, and to top it off she’s got a serious penchant for swilling Crown Royal—to the point where she gets the DTs after being tossed in a holding cell for too long.

Still and all, she has the wits about her to unravel the mystery and solve the crime.

C’mon. Sure, we want our protags to champion at the end of the day—but their responses need to be congruent too. Especially when they have—


These might be the big-bads like booze or drugs, but I’ll bet they will likely be more subtle, idiosyncratic things like discovering that the Nyquil you’re medicating that tricky bronchitis with sure seems to numb your raw feelings too. Or that the mail order catalog you’d normally toss into recycling pulls you and your credit card into a delightful escape hatch of lovely new things (because you need something to look forward to, right? And now all this splendid new stuff will be coming in the mail!) You’ll play Candy Crush while ignoring your phone calls. Cease eating because it’s just too much effort. And while you’re engaging in all these dysfunctional habits, your brain is keeping tabs ’cause guess what? Our minds love patterns—of any kind—because the mind finds said patterns to be soothing for their predictability. So we’ll keep engaging in these behaviors. And engaging, and engaging…. (Gulp!). And you may or may not care, because you’re—


You’re brittle, edgy and will blow up at the slightest provocation (jeez. It was only burnt toast). Or, conversely, yet one more crisis will occur and you won’t break so much as a sweat. Incongruent reactions are normal for someone who’s been pushed past the brink, for the mind can only tabulate a finite amount of negative stimuli before it will keep score in a whacky way—so for a character it may mean ignoring or down-playing critical information. Or lashing out and alienating someone who truly can help or loves them.

And for we, as the writers, it means:

Be Rewarding In Your Dénouement


Your character has been through a lot. They’ve paid for sins they haven’t even committed. You have hurt them so bad….don’t you think they deserve that Happy Ever After?

I think they deserve a Happy Ever After.

And I think you do, too.

When Cameron Weste lands in her life, a stalker surfaces too, dropping clues to a connection between Shaynie, Cameron, and her lost, brutal Hellnight. Suddenly every card warns of deception, and nowhere feels safe. Shaynie and Cameron have to fight for their love - and their lives - as The Devil, their stalker, is determined to turn the Death Card for them both.