Who Are Your Role Models? On Art Informing Life 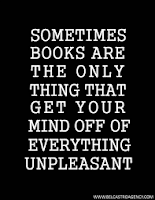 As a clinical social worker for over 20 years, I can attest to having had many times when my practice has informed my fiction. My experiences in the counseling room, for example, have helped me understand human nature—and, thereby, character development—in a way that few other practices would. Every day I spend counseling is the equivalent of many long and intense conversations—which in turn have allowed a learning about the rhythm, pace, and the natural cadence of dialogue that perhaps I would not know otherwise.

Yet while my life has informed my art, until recently I never considered how the reverse may be true—not until a friend and I were having a conversation about role models and the impact they have upon the development of ourselves.“Who were your role models?” I asked this person who is, by every measure, an excellent parent, despite having had experienced only dysfunctional parenting.

“The Waltons,” was the reply and while my first inclination was incredulity, as I listened I began to reflect on the power of fiction in terms of modeling—for those who may not see it otherwise—appropriate bonding, discipline, conflict resolution, coming-of-age…the list goes on and on. The Waltons, for my friend, were a rock in a sea of turbulence. They provided a template of unconditional love, support, and healthy boundaries which were otherwise foreign in this person’s ‘real life’.‘This,’ my friend thought, ‘is what a family is supposed to look like,’ and from tuning into these characters, week after week, my friend saw qualities to aspire to and emulate.

Surely there are other examples too. Consider the (now very dated) coming-of-age novel Are You There, God? It’s Me, Margaret and what that may have taught an adolescent girl from a very oppressive or perhaps a very disengaged home about periods and sexuality and crossing that bridge between childhood and womanhood.

Or what Nancy Drew has, for generations, modeled for girls who may not be socialized to revere qualities like independence, tenacity, ingenuity, and, essentially, feminism. How about even series novels for the very lonely, series with recurring characters who feel like friends?

I actually experienced this, in my first read of 2018 when, after 20 years of having not read any of Jonathan Kellerman’s Alex Delaware series, I picked up Heartbreak Hotel. The feeling was truly quite exquisite for, in ‘hearing’ Alex and Milo again after such a long time, I was not only immersed in the story, but had the overwhelming, and warm, sensation of having ‘come home’.

Our stories and the characters we create to tell them hold far more potential and power than we might think. For would the writers of The Waltons know (or could they ever have predicted) that they would be the reason behind my friend making excellent choices and decisions as a parent? Does Judy Blume know that she taught perhaps hundreds of young girls what to expect when they got their first period? Were the cast of writers known as Carolyn Keene aware that they were creating a role model for girls across the globe?

Do YOU know how impactful your stories or characters are upon your readers? Are you aware that you might, quite literally, be changing someone’s life?

What we’re doing, as writers, is creating art, and yet within this, my first Fiction University article of 2018, I would like to say “Thank you” to each of you for the contributions you are making to heal and validate and provide company for the many, many (far too many) broken and hurting souls out there. Your efforts are so much more important, and necessary, than you might ever know.

Happy New Year to each of you. Let’s all determine to Shine On in 2018.

And, by all means, share in the comments below, any series, stories, or characters that provided something crucial to you within this journey called ‘Life’.