Do Your Characters Have the Right Flaws? 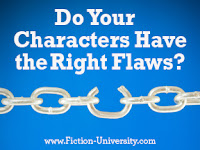 “Characters must have flaws” is one of the cornerstones of fiction. Flaws create more interesting people, they give you the foundations for your character arcs, and they help you write more relatable stories. But just having flaws isn’t enough. You want the right flaws that will best serve your story.

So what are the “right” flaws?

Flaws that help illustrate aspects of the story you want to explore.

This doesn’t mean you can’t have a literary protagonist with physical flaws, or a romance hero with deep emotional issues, but flaws that don’t serve the story in some way often lead to stories that are hard to write. You just don’t have all the necessary tools for the job. Sure, you might be able to use that wrench as a hammer, but it won’t be as effective.

Here are some things to consider when looking for the right flaws for your characters:

1. What flaws support the novel’s theme?


Your theme is as often-underused resource. This is the concept tying your story together, and it can be a wealth of inspiration on how to develop that story. One of the strongest areas we see theme is in our characters, their flaws, and their character arcs.

If you’re writing a romance between characters with commitment issues, “Failure to commit” can be the guiding idea in the novel. Good flaws might be someone who always cancels plans at the last minute, or never follows through once they start something.

(Here’s more on how to develop your theme)

2. What flaws will keep the character from making good choices?


Plots are about the choices the characters make, and if they always make the right choices, odds are the story will feel flat. Flaws are a great way to give your characters reasons to mess up when they need to, keeping the plot unpredictable and interesting for the reader.

If you’re writing a thriller, a character might have problems with authority, which causes him to question his superiors or ignore their directives. He might do what he thinks is best, even when he’s wrong.

3. What flaws will cause the character the most pain?


My personal motto is, “What doesn’t kill my characters makes them more interesting,” so this is a favorite of mine. Characters who bring about their own problems by their own actions are a lot of fun to write. They bring delightful internal conflict to a story, and give you plenty of opportunities to get them into trouble and them back out of it again.

If you’re writing a literary novel about a character who is her own worst enemy, these are great flaws to develop. Someone who acts against her best interests will have flaws that prevent her from being happy, and may even be self-destructive in nature. Behaviors and views might cloud her judgment or make it impossible for her to see what’s really going on in her life.

Think about what will hurt your character: Are there flaws that developed as a result of this pain? Did a flaw cause this pain? Are there unconscious flaws leading to painful situations or outcomes the character is trying to avoid by doesn’t know how?

Flaws don’t always lead to suffering and bad choices, so it’s a good idea to also consider the flaws that bring out the best in your characters.

4. What flaws will lead the character to true happiness or success?


Positive flaws are often quirks or traits that show off a character’s personality. These are usually the reasons readers like them, and are the things that keep the character pushing on even when all hope appears lost.

Refusing to think about tomorrow could be a flaw that allows a character to focus on the present and not worry about things she can’t do anything about. Irresponsibility or impulsiveness might be just the things that make the character appealing to a love interest who feels trapped by life and doesn’t see a way out. Forgetfulness so bad the character is forced to write everything down could be the reason the bad guy gets caught.

Think about the flaws that lead the character to success: What traits will put the character where they need to be (physically or emotionally) to win? What flaws create happiness, even though it causes trouble somewhere else? What flaws do other characters appreciate or find endearing?

5. What flaws will make the character likable or relatable to readers?


If readers can’t relate to, like, or be fascinated by a character they won’t read about them. “I didn’t care about the character” is a common reason stories get rejected. But flaws make characters human, and even if a reader doesn’t know what it’s like to be an alien from the planet Xerp, they do know what it’s like to be lonely, or scared, or feel like no one really understand what they’re going through.

Universal flaws can connect characters to readers no matter who they are or where they’re from. Pretty much everyone can relate to acting tough when inside you’re dying, or pushing people away because you don’t want to get hurt, or not taking something seriously because you want to avoid a painful truth.

Think about how your character is like everyone else: What are the common flaws they might share with readers? How might those flaws make them seem more human? What are possible flaws that will make readers accept them, even if they’re not the nicest character?

(Here’s more on ways to make a character likable)

Character flaws are wonderful tools for developing a strong story, so don’t ignore them when creating yours. They help bring depth and flavor to the plot, making it about more than just what a character does. Flaws make us human, and readers love a character because of their flaws.

What flaws do your characters have? What are some of your favorite flaws to write? To read?